Baidu, Pony.ai Nab Commercial Robotaxi Licenses for Use in Beijing 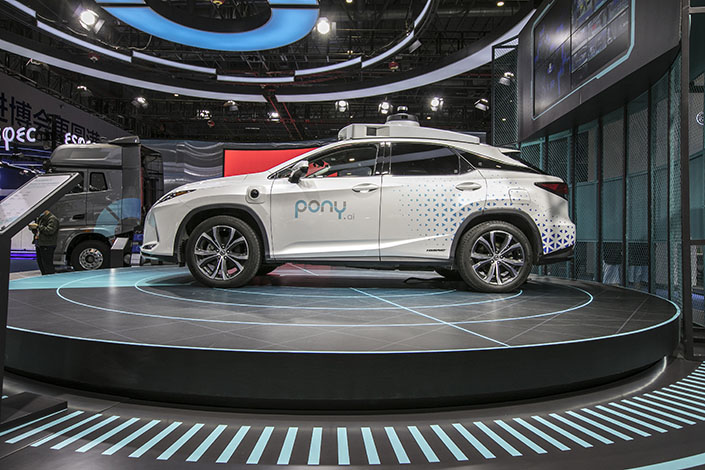 A vehicle developed by Pony. ai sits on display at an Expo in Shanghai in November 2020. Photo: VCG

(Bloomberg) — Search giant Baidu Inc. and Toyota Motor Corp.-backed Pony.ai Inc. were granted the first batch of licenses from Beijing regulators to start open-road autonomous commercial driving operations in a part of the city equivalent to the size of Manhattan.

The pilot licenses will allow a fleet of around 100 cars from the two companies to travel around the 60-square-kilometer (23 square mile) so-called Beijing High-level Automated Driving Demonstration Area, about a 30-minute drive from Tiananmen Square, according to state media reports.

Baidu received 67 of the permits and will allow its robotaxis to range between more than 600 pickup and dropoff points from 7 a.m. and 10 p.m., the internet company said in a statement Thursday. The area includes both commercial and residential precincts. Pony.ai will set up about 200 points in the zone, running from 8:30 a.m. to 10:30 p.m., the Guangzhou-based company said.

“Beijing, as the capital city and the first one to allow fare charging for robotaxi rides, will help companies accelerate autonomous vehicle deployment and test out and explore a business model,” BloombergNEF analyst Jinghong Lyu said. “It will also benefit industry players across the country as other local governments may follow Beijing.”

China’s capital is one of the first places in the world to embark on such a concentrated trial of robotaxis in a commercial environment. Both Baidu and Pony.ai will be able to charge consumers for the rides although detail around pricing and payment methods weren’t immediately available.

Totally replacing drivers in China, however, where labor costs are low and the government has a keen interest in maintaining near full employment, will be tough, and not just from a business sense. The country’s growing but relatively inexperienced driving population makes for complex and often unpredictable traffic conditions, while varied road rules and street signs across provinces bring more challenges to the technology application.

“The issuing of the permits signifies that the development of autonomous driving in China has completed the testing stage to begin wider commercial exploration,” Baidu said. Baidu’s Hong Kong-traded shares rose as much as 4.8%, the biggest intraday jump since Nov. 2.

Baidu is a leader in the research and deployment of autonomous driving in China, already the world’s biggest market for electric vehicles and car-sharing. It has teamed up with carmakers like BAIC Motor Corp. and Zhejiang Geely Holding Group Co. to develop autonomous and electric vehicles, while expanding a nascent chip business beyond just in-house applications.

Founded in 2016, Pony.ai develops and operates self-driving fleets in the U.S. and China and has secured funding from Toyota and China FAW Group Co.