In Depth: China’s Opened Its Doors to Foreign Financial Firms — Can They Prosper? 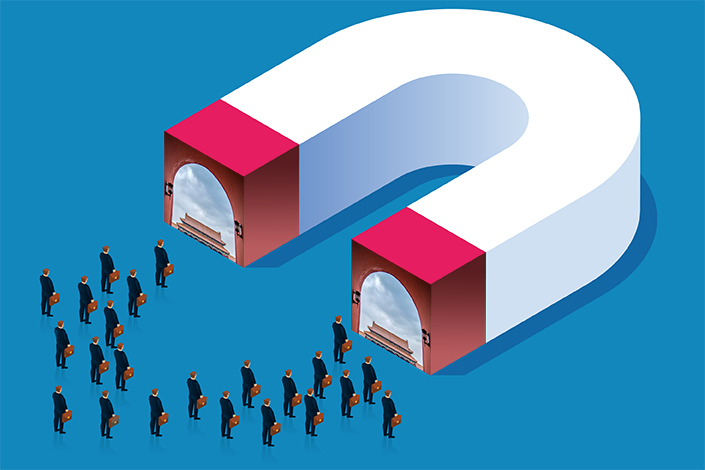 Over the past three years, China has accelerated the opening-up of its financial sector, giving foreign institutions unprecedented access to investors in the world’s most populous nation and to one of the biggest capital markets.

After pledging in 2017 to remove barriers to ownership, the government finally started to give the greenlight in 2020 for companies including Goldman Sachs Group Inc. to operate wholly owned companies on the Chinese mainland for a range of financial services including mutual fund management, life insurance, and securities and futures broking.

Regulators have also made it easier for foreign institutions to invest in onshore markets through long-standing initiatives such as the Qualified Foreign Institutional Investor (QFII) scheme, and through expanding programs connecting mainland stock and bond markets with those in Hong Kong. From the beginning of the year to Nov. 10, the China Securities and Regulatory Commission (CSRC) approved another 101 overseas institutions to invest in the domestic capital market via the QFII program, the highest on record.

The authorities have also expanded the derivatives market and allowed overseas investors greater access to help them hedge their risks, and relaxed regulations on issues such as taxation and repatriation of profits. Since Nov. 1, investors under the QFII program have been allowed to trade commodity futures, commodity options and stock index options, areas previously closed to them.

The opening-up measures have led to a surge in yuan-denominated financial assets in onshore markets held by foreign investors, namely stocks, bonds, bank loans and deposits. In May, the value of their holdings surpassed 10 trillion yuan ($1.57 trillion) for the first time, almost double the figure two years previously, and stood at 10.2 trillion yuan at the end of September, according to the most recent data available from the People’s Bank of China.

But opening the door is one thing, the challenge now for foreign institutions is to grow their businesses, expand market share and increase profits in an environment where regulations, market characteristics and competition differ significantly from those in the more traditional, established markets they are used to operating in.

“It’s not just about bringing in foreign investors, what is more important is to let them develop smoothly and successfully in China,” said an executive working at a foreign-funded financial institution. “If they fail to make it in a few years, they will all leave and there will be a wave of divestment.”

Another executive told Caixin that even though foreign investors have more access, what they are increasingly concerned about is the consistency and predictability of policies. The onslaught of regulatory tightening on various sectors including fintech and education over the past year has shaken investor confidence.

Read More
Opinion: The Who, What and Why of China’s Regulatory Campaign

Regulation and a rapidly changing policy environment are significant challenges for foreign institutions, along with the need to develop a more in-depth knowledge of the local market, better relationships with regulators and intermediaries, and increase distribution channels and brand awareness. Complaints about unfair treatment and red tape are also common. In the asset management and wealth management sectors, new foreign entrants don’t have a long track record in the domestic market to burnish their credentials and the highly competitive nature of the market makes it difficult to differentiate themselves and launch innovative products.

Foreign financial institutions are well aware of those challenges, however, and many have been present on the mainland for years, building up an understanding of the regulatory framework and the market through joint ventures as they awaited the green light to go it alone.

In wealth management, joint ventures are still the main option, and foreign companies usually hold a majority stake. Amundi Asset Management, Europe’s largest asset manager, was the first to win majority-ownership approval in December 2019, taking a 55% stake in a venture with Bank of China Ltd.’s wealth management arm. It formally opened for business in September 2020 and has launched dozens of publicly offered wealth management products. BlackRock and Schroders are also in joint ventures.

China’s “parental” style of regulation is a challenge for many overseas companies involved in the financial sector. A manager at one foreign-invested brokerage complained that rules and procedures for allowing a company or a product to enter the market are too strict. A foreign institution seeking to raise its holding in its China joint venture to 100% from a 51% stake still needs to go through the same laborious procedures as a minority shareholder applying to increase its stake, he said.

Investment banking is more tightly supervised than in many overseas markets — the workload involved in helping a company list on the A-share market is more than four times what is required in Hong Kong, one investment banking source said.

Licensed financial institutions are also required to register or get approval for every new product they want to launch, which reduces efficiency and slows down their expansion. “If China continues with this way of regulation, it won’t be able to keep up with the rapidly changing market or with increasingly complex demands for financial services from retail and institutional investors, let alone financial innovation,” the manager said.

Another manager urged the authorities to respect foreign institutions’ own views and decisions of their parent companies. Regulation should not require foreign institutions to develop in one direction in China, but to some extent, many policies, including window guidance, are driving sheep in the same direction, he said.

Different metrics for assessing financial institutions are also problematic for foreign brokerages, notably the use of net assets to gauge business strength. Chinese regulators include net assets in a supervisory framework to contain excessive leverage in the financial sector and protect investors’ interests. That conflicts with the business model institutions usually adopt in developed markets, which doesn’t require as much capital, the manager at the foreign brokerage said, adding that the framework is based on a “one size fits all” approach that doesn’t take account of the characteristics of foreign capital.

It is easier for brokers with more than 2 billion yuan of net assets to get a higher ranking under a classification system used by the CSRC to measure their risk management capabilities. But that puts foreign institutions at a disadvantage because currently, the net assets of their China ventures are on average about 1 billion yuan. Some foreign brokers complain that the supervisory framework neglects their other advantages, such as expertise in financial services.

Regulatory uncertainty is another concern for many foreign institutions. This year, China’s wide-ranging regulatory tightening on internet platform companies and the education industry, as well as energy conservation and carbon reduction policies, have unnerved investors and hurt the country’s stock market. Foreign investors want a stable business environment and consistent regulatory policies, a manager at an overseas firm said.

The CSRC acknowledges that improvements are needed, an issue addressed recently by Shen Bing, director of the commission’s international cooperation department, at a conference in Beijing in October.

“We are also clearly aware that there is still a big gap between the degree of internationalization of China’s capital market and developed markets (overseas),” Shen said in a speech. “In addition to the difference in the degree of openness, more importantly, the provision of regulations is inadequate… Local regulations and rules are still not fully in line with international best practice, and the completeness, transparency and predictability of the system need to be enhanced.”

Regulators are considering a new round of measures to further broaden access to the domestic market in line with the government’s high-level opening-up strategy, sources with knowledge of the matter told Caixin.

But words need to backed up with action, one executive at a foreign financial institution told Caixin.

“In the past few years, there have been a lot of financial policies regarding foreign investors’ access to the Chinese market, many of which responded to long-standing concerns raised by foreign institutions,” the executive said. “But most are about decreasing limits, or relaxing of restrictions in some very specific financial business areas. That’s not a systemic or institutional high-level opening.”

Policies also need specific measures and guidelines to be implemented effectively, he said. “Simply shouting slogans and drawing up big ideas is not enough.”

China’s unique market environment and characteristics are difficult for many foreign institutions to get to grips with. They also lack the depth and breadth of relationships their domestic rivals enjoy and which are essential for companies involved in investment banking activities such as sponsoring or underwriting stock or bond issuance, and advising on reorganizations and mergers and acquisitions. Domestic brokerages usually build close partnerships with local intermediaries to bring in more clients, and they are also more familiar with the way financial regulators and local governments work, a person working for a Chinese broker said.

The lack of familiarity with the market and the time-consuming process of building local expertise mean many foreign institutions need to partner with local teams to help with their investment banking business to save time and energy and to improve business efficiency, a source at a foreign investment bank said.

Foreign asset managers who sell their products directly to retail investors also have to overcome their lack of a track record in the Chinese market, poor brand recognition, and weak sales networks as well as strong competition from well-established domestic players. They also need time to become familiar with Chinese investors’ preferences.

Sources at several foreign financial institutions told Caixin their group headquarters were prepared to lose money in the first few years after entering China and were focused more on gaining market share. Expanding in China for strategic reasons and the synergy it brings to a company’s global operations are more important than making a profit at this stage, one source said.

Even so, the challenges have already prompted one of the world’s biggest asset managers, The Vanguard Group Inc., to drop plans to set up a wholly owned mutual fund company in China and instead focus on growing its business through its robo-advisory joint venture with Chinese fintech giant Ant Group Co. Ltd. The American fund manager paused its application for a license in March, amid speculation it was put off by the process of growing the business on its own in a highly competitive market where it lacks distribution channels, and by administrative red tape.

Many foreign financial companies are optimistic and prepared to dig in for the long haul to win market share and develop their businesses in spite of the challenges.

Fidelity International, for example, first set up an office in China in 2004 and set up a technology operation in the country in 2007.

“Then we waited very patiently for the opening up of the market where foreign players would be allowed entry,” Rajeev Mittal, Fidelity International’s managing director for Asia Pacific ex-Japan, told Caixin in a recent interview. “When that time came, we applied for the private fund management qualification and then for the wholly owned mutual fund license.”

Having obtained its license in August, Fidelity is now preparing for an onsite inspection by regulators and hopes to launch its first mutual fund some time in 2022.

Getting in front of potential consumers is an issue, and Mittal said the company wants to work with banks and securities companies to expand distribution channels for its products. Online sales channels, such as online platforms of Ant Group and Tencent Holdings Ltd., are becoming increasingly important and Fidelity has built a small team to better understand online distribution channels, he said.