By Sun Yanran and Kelsey Cheng 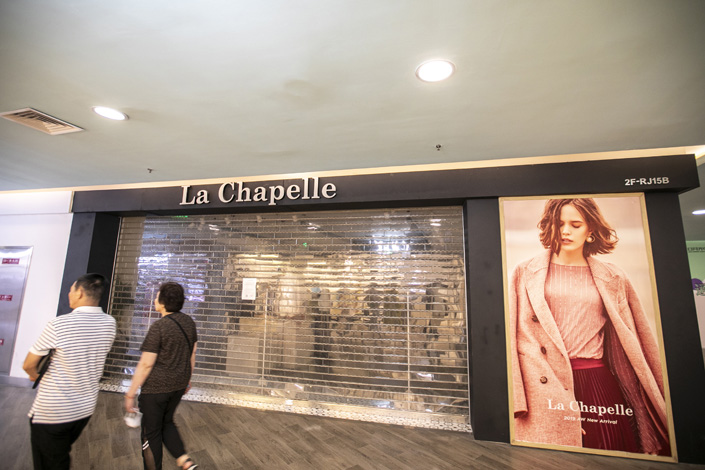 The parent of troubled Chinese fast-fashion brand La Chapelle vowed to fight court petitions by three of its creditors seeking the company’s liquidation, after it failed repay millions in debt.

But the firm, which faces delisting from the Shanghai Stock Exchange, admitted it has liquidity problems in a notice filed to the bourse on Tuesday (link in Chinese).

Three suppliers of Xinjiang La Chapelle Fashion Co. Ltd. (603157.SH/06116.HK), which at one time aimed to become the Chinese version of Spanish apparel chain Zara, have filed court petitions for the company to be wound up due to its inability to repay debts, according to the notice.

The company, which was formerly backed by U.S. investment bank Goldman Sachs Group Inc., owes the suppliers more than 31.4 million yuan ($4.9 million), according to the notice and a previous filing.

In response, La Chapelle Fashion said the petitions had been filed to the wrong court and thus “do not comply with the relevant legal procedures,” according to the statement. Therefore the “company will apply for objection to the petitions for winding-up and liquidation to the People’s Court of Xinshi District in a timely manner.”

It also had “not received any court rulings regarding the current winding-up petitions and there is great uncertainty in the creditor’s petitions.”

This is just the latest in a string of legal troubles for La Chapelle Fashion, which includes numerous court-approved claims through litigation for more than 2 billion yuan, resulting in the freezing of its bank accounts and equity interest in subsidiaries, and the seizing of certain real properties, according to its third quarter earnings report.

As for the current petition seeking its liquidation, “the company will continue to actively negotiate with creditors and the court, strive to eliminate the adverse impacts as soon as possible,” according to the statement.

Established in 1998, La Chapelle Fashion debuted on the Hong Kong Stock Exchange in October 2014, followed by a listing in Shanghai where it raised 460 million yuan. Apart from La Chapelle, it also has other female-targeted brands including Puella, La Babité, 7 Modifier and Candie’s.

Following its secondary listing, the apparel retailer entered a phase of rapid expansion of its retail network and accelerated the development of its online business to boost revenue. It operated more than 9,000 physical stores in China at its peak in 2018, a number that has since tumbled to 349 by the end of September after mounting losses forced it to begin shuttering its retail stores.

“La Chapelle relied too much on developing a large-scale strategy and lacked actual brand integration capabilities, resulting in its sub-brands competing against each other,” senior researcher Jiang Han at think tank Pangoal Institution told Caixin.

In the first three quarters of this year, La Chapelle Fashion registered negative net assets of 897 million yuan attributable to shareholders of the company and a net loss of 288 million yuan. Operating revenue was reported to be 365 million yuan while total liabilities stood at 3.86 billion yuan.

In that report, the company attributed the “significant decrease” in each of its brands to fewer stores, a transformation to the licensing business model and a decrease in product purchases.

If the court accepts the creditors’ winding-up petitions, its A-shares will also risk being delisted in accordance with the Shanghai bourse’s regulations, the company warned in the Tuesday filing.