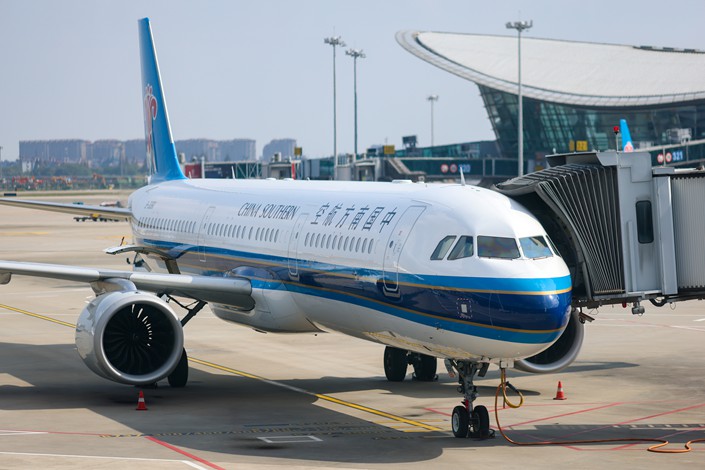 Shares of major Chinese airlines dipped as the discovery of a new variant of Covid-19 triggered fresh travel restrictions and further obscured the aviation industry’s path to recovery.

To tackle the spread of the omicron variant — first identified in southern Africa early this month and designated a “variant of concern” by the World Health Organization (WHO) Friday — a growing list of countries have restricted flights and nonresidents traveling from some southern African countries.

But flight schedules between China and Africa look to remain stable for the time being.

With natural isolation from the real world and the nature of interconnectivity, virtual assets can easily become a money laundering tool for criminals, Gou Wenjun, director of the Anti-Money Laundering Monitoring and Analysis Center of the People’s Bank of China (PBOC), said at a financial security summit.

As cash-strapped property companies became reluctant to bid for land, local government financing vehicles (LGFVs) have stepped in to help authorities make ends meet, but questions remain over whether their purchases can boost local revenues in real terms.

LGFVs have bought more land use rights nationwide starting in the third quarter when the cash crunch at some private property developers worsened, and in some places these vehicles became the major bidders. From July to Nov. 15, LGFVs bought 13.38% of land parcels by value across the country, up 4.38 percentage points from the January-to-June period, according to calculations by brokerage Zhongtai Securities Co. Ltd.

Troubled electric vehicle (EV) startup Faraday Future Intelligent Electric Inc. told stakeholders that its stock is not at risk of being delisted from the Nasdaq, after the bourse issued a warning letter over its failure to file earnings for the third quarter.

Shares of Faraday will be stuck with an “out of compliance” label unless the firm submits a compliance plan within 60 days and releases its earnings within 180 days, according to a Monday statement (link in Chinese) from the company. The company was added to the Nasdaq’s noncompliant companies list Nov. 17.

"We are confident that we will be back in compliance in the relatively near future,” Faraday said in the statement, which was published in Chinese and English on its WeChat account. The company said it was working with the bourse to resolve the issues.

Chinese video streaming firm Youku Tudou Inc., a unit of internet giant Alibaba, won a copyright infringement lawsuit it filed against TikTok-like app Kuaishou, with the victory coming after regulators vowed to tighten oversight of such violations by users on short video platforms.

Hong Kong-listed Kuaishou was ordered by the Beijing Internet Court Monday to pay Youku compensation of 460,000 yuan ($72,200) for allowing users to upload content from TV romance series “Skate Into Love” without Youku’s consent, according to a statement provided to Caixin by Alibaba Digital Media and Entertainment Group.

The Chinese star of Oscar-winning documentary “American Factory” is now turning his attention to education and plans to build a university with the goal of cultivating applied research and technical talent to bolster China’s self-sufficiency, seen as crucial in the country’s increasing tech rivalry with the U.S.

Tencent will begin testing a function to allow group-chat participants to share links to third-party e-commerce platforms, the company said Monday in an official blog post. Directed by regulators, the company will eventually allow WeChat’s users more options for sharing content, though it didn’t elaborate. And it promised to let them tweak settings and take other steps to manage external sharing in the future.