Trending in China: Chinese Model Defends Shape of Her Eyes in Controversial Ad 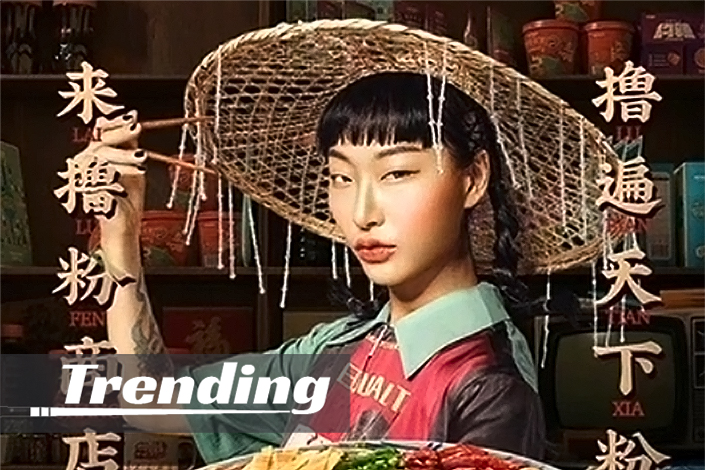 An advertisement for snack retailer Three Squirrels featuring a Chinese model with “squinty eyes” has sparked a heated debate online over Western stereotypes of Chinese people, with angry internet users accusing the model of “insulting China.”

The debate widened after the model, who goes by Cai Niangniang on China’s Twitter-like microblogging platform Weibo, hit back at the users’ claims Sunday night, saying she was born with narrow, small eyes and she suffered cyberbullying.

On Sunday, an internet user posted a series of old Three Squirrels photos used to advertise its food product on Weibo. The photos circulated online showed a female model posing with the product, with some netizens interpreting her look as that of “squinting.”

The photos soon came under fire as some netizens criticized the model’s appearance, saying it played on a negative Western caricature of Asian people, with make-up that made her eyes look more narrow and slanted.

That night, Cai posted an article on her Weibo account revealing that she was the model. She said these were the eyes she was born with and that she has suffered online abuse and humiliation over the advertisement that was shot in 2019.

“I feel very helpless about the online comments. I don’t know what I’ve done to deserve this kind of online aggression. I am just an average employee who did what I asked to do. Does it mean I’m not worthy of being a Chinese because of my small eyes?” she said.

“I raise my hands in favor of patriotism! But it’s a morbid state to be moralistic about everything. Please be a netizen with a healthy mind,” she added.

In one message Cai posted, she shared a comment from a social media user who wished her death from Covid-19 and called her a “spokesperson for insulting China.” In another message, a user asked why she could be ugly but so confident.

Cai said the social media users didn’t consider how their comments would affect her career as a model. She noted she would resort to legal measures if she continued getting “personal attacks.”

Separately, some netizens said that Cai appeared to like squinting in her videos on Douyin, known internationally as TikTok.

Cai’s case has drawn attention to Leshan Giant Buddha, a 71-meter tall stone statue in the southwestern province of Sichuan, where some netizens noted the protected statue also has narrowed its eyes over the past few decades. In a 1925 photo circulating online, the statue had bigger eyes and bushy eyebrows.

On Sunday, the snack retailer apologized on Weibo over the “discomfort” brought upon by the ad, while adding that it has removed the web page containing the advertisement.

Some detractors of the ad have clarified that their criticism is not directed at the model, but at the snack brand, while others pointed out issues of self-esteem among critics.

One commenter said that there was nothing wrong with one’s appearance, but the way the brand promoted its products is regrettable.

Another commenter added: “Have the Chinese lost their confidence? No, they still have a fragile heart.”

Yet another commenter pointed out the core of the matter is the aesthetic difference between the East and the West. “Squinty eyes make us feel offended. That’s because of stereotypes and prejudices… Isn’t this a manifestation of inner self-esteem?”

On Tuesday, state-run People’s Daily made a comment online on Cai’s case. The newspaper said narrow eyes have become a special issue. “We should be aware of what is insulting China, while also recognizing how the issues around slanted eyes can confuse domestic public opinion, or even force people to stand in line to create divisions.”

Hu Xijin, former editor-in-chief of nationalist tabloid Global Times, weighed in on the issue, saying that when Westerners say Chinese’s eyes are small, there are those who are scornful, and some are just joking. The latter might not mean anything bad.

Chinese people can be both self-confident or self-deprecating when honestly assessing their eyes, which is all right, he said, noting that it’s really unnecessary for Chinese to magnify or overanalyze, “continuing to tear through the cracks between China and the West.”