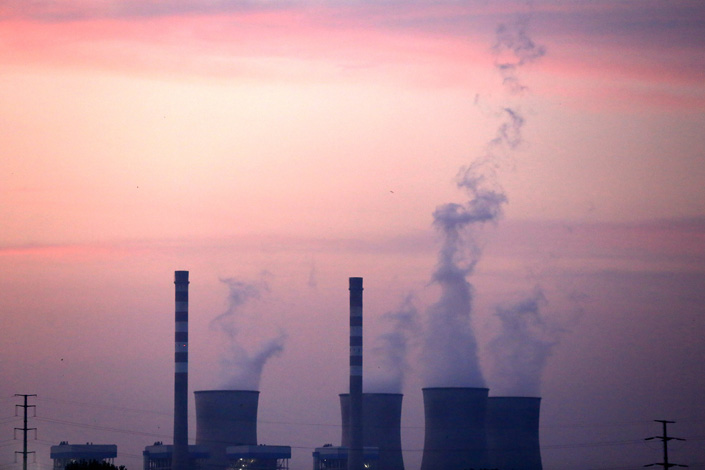 Caption: Smoke billows from the chimneys of a power plant in eastern Jiangsu province's Huai’an in 2018.

Editor's note: Caixin Global and Yale Center Beijing jointly launched in August a Smart Talks on Climate Change program, including an essay competition, to endow young leaders of the next generation aged 16 to 25 to tackle the problem. We're publishing the top three essays from the winners of the competition as this year’s program concluded in November.

In recent years, global climate change has led to frequent extreme climate disasters, which have caused suffering for countless innocent people. At the same time, the Covid-19 pandemic has evolved into a global crisis, which has seriously affected the trust and understanding between countries.

Since the greenhouse gas emissions caused by man-made activities have led to global warming and posed a huge threat to the ecological security of the Earth, responding to the global climate crisis is to safeguard the common interests of mankind. Achieving carbon neutrality is an inevitable choice for human society to protect the Earth’s ecology. Carbon neutrality means reducing carbon emissions from human activities and ultimately achieving net-zero carbon emissions. This is the development trend of the world and the only way to build a global ecological civilization.

For a long time, China’s energy consumption structure has been dominated by coal. This special energy structure makes China’s energy problems closely related to environmental issues. China is now responsible for more than 27% of total global emissions, far exceeding the U.S. — the second highest emitter — which contributed 11% of the global total.

Although China and the United States account for about 40% of global carbon emissions, these emissions are not a separate issue of the United States, China, or Europe. It is a problem that requires the joint actions of all countries in the world to resolve. In the process of achieving carbon neutrality, because each country has different development stages and national conditions, its strategies and technological choices are also different, which brings about the issue of how to implement the transition fairly for the international community. China and the United States need to cooperate rather than fight alone to ensure that other countries can follow.

Both Chinese and American leaders have proposed emission reduction targets: President Xi Jinping announced that China’s carbon dioxide emissions will reach their peak by 2030, and strive to achieve carbon neutrality by 2060. The Biden administration also announced a new target for the United States to achieve a 50% to 52% reduction from 2005 levels in economy-wide net greenhouse gas pollution in 2030, and reach net-zero emissions economy-wide by no later than 2050. From the scientific and technological view, it is very difficult for the two countries to achieve emission reduction targets because there are still many uncertainties in carbon reduction technology, navigation, and long-distance transportation. Even so, it is inspiring that China and the United States have successively proposed ambitious emission reduction targets and plans, which would encourage other countries and people to take climate change issues seriously.

“If carbon is to be reduced, 50% to 60% of the world’s electricity will come from wind and solar energy in the future,” said Daniel Schrag, the Professor of Environmental Science and Engineering at Harvard University, in the 2021 China-U.S. Public Diplomacy Summit. Therefore, our future focus is not on domestic emissions, but on financing, support to enable more countries to embark on the path of clean energy. We need to establish a financing and financial model in which cooperation and competition coexist to jointly respond to the threat of global climate change. All these goals can only be achieved under the lead and cooperation of China and the U.S. — the world's largest developing and developed country and major emitters.

It is important that China and the U.S. to pay more attention to the voices of the youth, and young people also need to be aware of the important role they can play as communicators between their country and the world in promoting mutual understanding and trust. Where there is thought and communication, there is friction and misunderstanding. The young generations have to take the protection of the future of human destiny as the ultimate goal, instead of refusing to cooperate and communicate due to differences in ideology and the possibility to fail.

The cooperation on responding to the climate crisis between China and the United States is a vital step that we must take. Only when we can hold a tolerant and open attitude to promote communication and collaboration, will the two countries have more opportunities to push the destiny of the world on a better track in the future.

Liu Ziying is a student at Brandeis University.