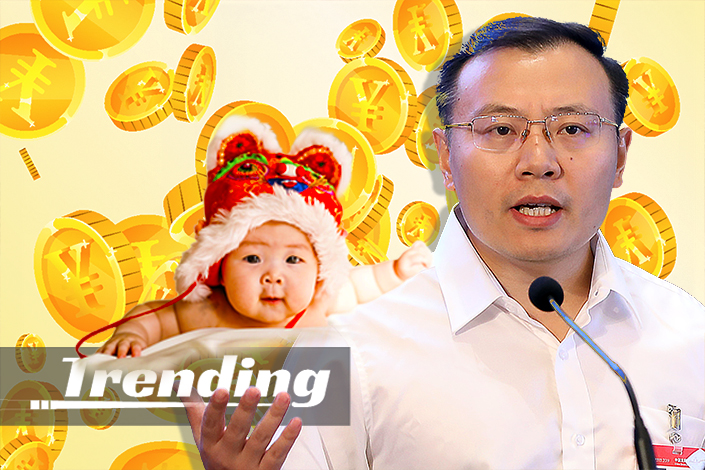 A prominent economist’s argument that China’s central bank should print an extra 2 trillion yuan a year to boost the country’s falling birthrate was met with widespread derision online.

As of Tuesday afternoon, the related hashtag #Ren Zeping said we cannot count on post-90s and post-00s for fertility #任泽平称生育不要指望90后00后 has received over 20 million views on China’s microblog platform Weibo. Another hashtag #Would central bank printing 2 trillion yuan raise fertility rate? #央行多印2万亿能提高生育率吗 has been viewed around 10 million times.

“The central bank should print an additional 2 trillion yuan every year for a fertility fund designed to add additional 50 million births in 10 years and solve the aging population issue and the falling birthrate,” said Ren Zeping, a chief economist at Soochow Securities, on his personal Weibo account on Saturday.

Two days after he posted this, Ren’s team published a report — “Solutions to low fertility have been found — China Fertility Report,” on Monday, in which he reiterated his “fertility fund” theory, explaining how it could raise China’s fertility rate.

“We must seize the time in which those born between 1975 and 1985 can still give birth, and introduce a fertility encouragement fund … Don’t have too many expectations of the post-90s and post-00s generations [to raise the fertility rate],” the report said.

Ren, the country’s highest paid strategist and a former chief economist at Evergrande Think Tank, joined Soochow Securities Co. in March 2021. He has made a name for himself commenting on China’s stock market and social media topics such as the metaverse and new energy. It is not the first time he has waded into discussions on China’s fertility rate.

Beijing has struggled to shake off fears that China’s fertility rate has been dropping calamitously since the last national census results were published in May 2021. The statistics triggered major central government policy changes including the move from a two-child policy to a three-child policy, as well as efforts to incentivize families to raise more children.

Ren’s words sparked debate on the usefulness of his suggestions.

Hong Hao, named China’s “Most Accurate Strategist” by Bloomberg, said Monday on Weibo that “Overseas experience has proved that printing money has nothing to do with fertility, and establishing the special fertility fund is also in vain.”

A commentary published by Caixin said that some suggestions put forward in the report, such as establishing a fertility fund, will indeed help to increase China’s fertility rate if implemented.

“To raise China’s fertility rate, we should not only count on older mothers, but instead on the younger generation, especially women aged 20-34,” the commentator remarked.

Many Weibo users teased Ren for his “2 trillion yuan” suggestion. “His words forced me to take out notes from my sophomore year and check the definition of inflation,” a Weibo user wrote.

Ren responded to economic doubts on Tuesday, saying “if the central bank prints an additional 2 trillion yuan every year, it won’t lead to inflation and a rise in house prices.”

He went on to say, “In the short term, it will help stimulate demand and stabilize growth, and in the long run, it will contribute to social vitality and long-term healthy economic development.”