CX Daily: The Uncertain Future of NFTs in China 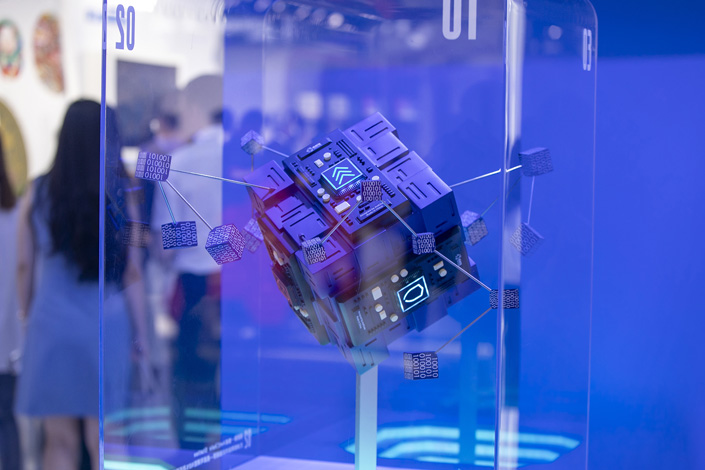 An all-in-one AntChain workstation on display at the 2021 World Artificial Intelligence Conference in Shanghai in July 2021. Photo: VCG

In Depth: The uncertain future of NFTs in China

Last year the non-fungible token, or NFT, broke into the mainstream as hype over the volatile market for pixelated artworks pushed sales into the billions.

While speculative investing in cartoon apes and other works of variable artistic merit has captured the most attention, industry observers say that the underlying technology could perhaps offer long-term value if companies look to deliver solutions to a wider range of practical problems.

In China, NFTs are a growing phenomenon despite a cautious regulatory environment and official hostility to cryptocurrencies, which also use blockchain technology. Also, while the ability to trade NFTs and potentially turn a profit has been a huge draw for the technology in other markets, there is so far no official secondary market for such tokens in China.

China’s new technical standards for unifying digital payment barcodes have laid the groundwork for tearing down the walls between different payment platforms, but to what extent interoperability can be achieved will depend on how forcefully regulators enforce these nonmandatory provisions, industry insiders told Caixin.

If strictly implemented, the standards are expected to have a significant impact on the booming multitrillion-dollar mobile payment market, shaking the duopoly of Ant Group Co. Ltd.’s Alipay and Tencent Holdings Ltd.’s WeChat Pay.

The new specifications for integrating payment barcodes, produced by the People’s Bank of China (PBOC), lay out a set of unified technical requirements for payment service providers, including quick response (QR) codes.

The bank sold 569.6 million shares of common stock at 3.57 yuan ($0.56) per share, raising 2.033 billion yuan ($319 million). The price indicated a price-to-book ratio of 0.82, the bank said Tuesday. A ratio of less than 1 could mean the stock is undervalued. The bank said setting an IPO price lower than its net assets per share might better protect the interests of investors.

The northern Chinese city of Tianjin tightened exit controls by canceling 97% of flights and requiring residents to have negative Covid-19 test results and obtain approval from employers or community authorities before leaving town.

Tianjin detected China’s first pair of local Covid-19 cases of the highly transmissible omicron variant over the weekend. The city of 14 million is carrying out mandatory nucleic acid testing on all residents starting Sunday. As of Tuesday, the port city completed tests of nearly 7.9 million people and reported 97 cases, local health authorities said at a press conference.

Hundreds of millions of tons of crude steel capacity will have to adapt to the country’s “ultra-low” emissions standards by the end of this year to stay on track with government plans for the sector, according to an environment ministry official.

For environmental and overcapacity reasons, China has for several years been reining in its steel industry.

By the end of the year, “about 560 million tons of crude steel production capacity needs to have cut pollutants and carbon emissions to meet the government-set standards as planned, of which only about one-fourth have completed the upgrade so far," Wu Xianfeng, deputy director of the Department of Atmospheric Environment at the Ministry of Ecology and Environment (MEE), said at a Monday forum held by the China Iron and Steel Association.

Amid sluggish smartphone sales in China, tech companies have pioneered a series of technological upgrades to drive consumer interest, with foldable phones becoming the latest fad.

Honor Device Co. Ltd., the former sub-brand of Huawei Technologies Co. Ltd., is the latest local firm to launch a smartphone fitted with a foldable screen as it pushes into the nascent high-end segment market formed three years ago.

Benxi Steel Group Corp., one of China’s top 10 steelmakers, is expected to post an annual net profit “for the first time in a decade,” said a top executive, after it was taken over by another state-owned steel giant last year.

The world’s largest steel producing nation has been pushing the sector to consolidate to cut overcapacity and compete with global behemoths. The campaign is also being driven by local governments that want to unload responsibility for overseeing inefficient local steelmakers.

VW bets on electric vehicles to resume growth in China