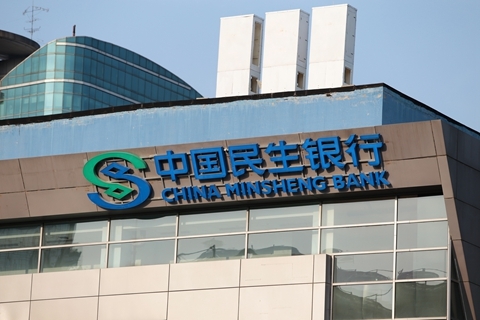 China Minsheng Banking Corp. Ltd., the country’s largest privately owned bank by assets, is most likely going through its coldest winter ever.

The Shanghai- and Hong Kong-traded lender is a major casualty of China’s property downturn. Minsheng is one of the largest creditors of debt-ridden China Evergrande Group, and it loaned tens of billions of yuan to other risky developers, sources with knowledge of the issue told Caixin. Some industry insiders say the bank is likely to struggle to collect these debts, some of which could soon turn irreparably sour.

Yields on benchmark Chinese government bonds recovered Tuesday after slumping to their lowest in almost two years the previous day when the central bank cut the interest rate on a key money-market instrument in its latest move to support the slowing economy.

The People’s Bank of China (PBOC) lowered funding costs Monday for 14-day reverse repurchase (repo) agreements by 10 basis points, or 0.1 of a percentage point, to 2.25% after last week reducing several key policy loan rates. The yield on the benchmark 10-year government bonds declined that day to close at 2.6775%, its lowest since May 2020, and recovered to 2.6975% Tuesday, according to data compiled by Bloomberg.

Most Chinese provinces lowered their gross domestic product (GDP) growth targets for 2022 as the country struggles with headwinds from the pandemic and the plunging property market.

All of China’s 31 provincial-level governments except virus-stricken Tianjin issued 2022 growth targets, most of them lower than the 2021 expansion. Gansu in northwestern China was the only one that set a higher target. Inner Mongolia in the north projected the same growth as 2021.

Cai Esheng, a former vice chairman and Communist Party committee member of the now-defunct China Banking Regulatory Commission (CBRC), has been expelled from the party for serious law and disciplinary violations including bribery, the country’s top anti-graft agency said Monday in a statement.

Cai took bribes and in return helped others get financing and promotions, the Central Commission for Discipline Inspection said. He abused his power and severely disrupted the order of the financial market, it said.

Hong Kong researchers discovered a new combination of drugs that could work as an orally administered Covid-19 treatment.

The broad-spectrum antiviral medication has the potential to facilitate treatment at home and reduce the burden at hospitals, they say.

In-Depth Analysis: China will push for greater self-reliance in food

Fisher: The many myths behind the worries over rising global interest rates

The co-founder and former chairman of Luckin Coffee Inc. plans to expand his new food and beverage industry startup using a similar business model and some of the same team as the chain that was rocked by an accounting fraud scandal.

The planned expansion of A-Bite Technology (Beijing) Co. Ltd. marks Lu Zhengyao’s shot at becoming a force in a high-growth market that has investors’ mouths watering, even as he remains under the shadow of Luckin, whose fraud scandal revealed in 2020 got him booted from the helm of the company and the one-time Starbucks challenger kicked off the Nasdaq.

Founded in August 2020 just months after the scandal broke, the meal-kit maker A-Bite has so far opened 10 stores and signed contracts with over 3,000 franchisees, according to Li Yingbo, rotating CEO of the company, in a Friday interview with Caixin.

The Winter Games and Paralympic Games are being held at the conjunction of winter and spring, when meteorological conditions are “very unfavorable,” Liu Youbin, spokesperson for the Ministry of Ecology and Environment, said at a Monday press briefing.

The assets up for sale include residential, office, commercial and hotel projects wholly or partly owned by Shimao, according to documents seen by Caixin. The projects are in 17 cities including Beijing, Shanghai and Hangzhou and in the Greater Bay Area. Shimao didn’t comment.

The Goldman Sachs and Tencent-backed enterprise is seeking new funding to expand its business as increased demand fails to arrest the growth of losses.

Tuhu plans to use money raised from the IPO to help automate its distribution centers through the use of robots, build more warehouses, and develop technologies for data wrangling, the firm said in a preliminary prospectus published Monday.