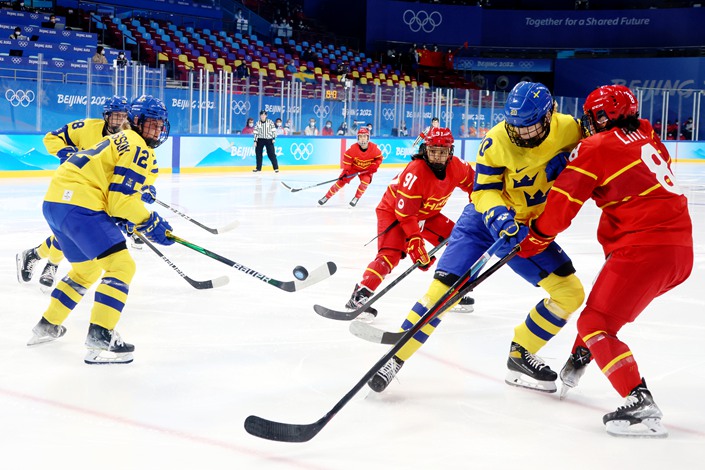 Ice hockey, considered as one of the “crown jewels” of winter sports, is one of the most professionalized sports among all the Winter Olympics competitions.

Modern ice hockey is believed to have evolved in Canada in the 1800s. It was introduced to China during the late Qing Dynasty (1644-1912). At that time, missionaries, officials, and merchants from other countries brought the sport to China. It gradually spread all over the nation. The first ice hockey rink in China was built as early as 1890. Foreigners living in Tianjin and Beijing even formed ice hockey clubs and jointly held the Beijing-Tianjin intercity ice hockey tournament each winter. Then, foreigners living in China’s northeastern cities such as Harbin, Shenyang, and Dalian began to build ice hockey rinks in winter. Since then, the sport has become more and more popular in the country.

After the founding of the People’s Republic of China, ice hockey developed rapidly. In March 1981, the men’s ice hockey world championship (group C) organized by the International Ice Hockey Federation was held at the Capital Indoor Stadium in Beijing. The Chinese team won second place in the tournament, creating an “ice hockey fever.” The sport then gained increasing support across the country.

After China won the bid for the 2022 Winter Olympics, more and more teenagers in Beijing started to learn ice hockey as interest and investment in ice and snow sports grew.

Zhang Xinping and Yang Zhanwu are coeditors of the “Fun With Winter Olympics” book series published by the Sun Yat-sen University Press.

This article is partly excerpted from the book series and from the Xinhua News Agency.

Translated by Mei Yue and reviewed by Guo Cong. (Both are from the School of International Studies at Sun Yat-sen University)