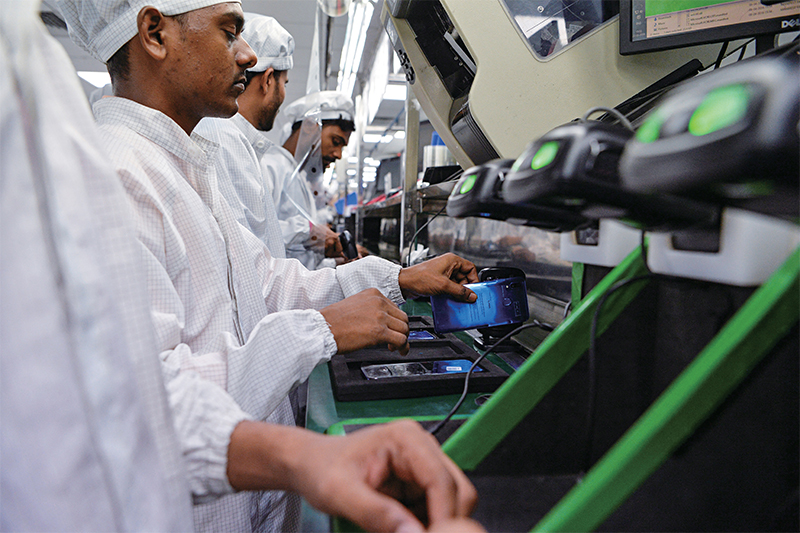 Workers assemble cell phones at a factory in India.

China’s strict pandemic controls blocking production and logistics threaten to add impetus to the manufacturing exodus that has been picking up speed over the past decade, international trade experts said.

The Covid policy disruptions add to pressures from rising labor costs in China and worsening Sino-U.S. trade tensions. With low labor costs and surging domestic demand, Southeast Asia and India have become the most popular destinations.

Goldman Sachs ICBC Wealth Management Co. Ltd. will develop and launch a series of wealth management products for the Chinese market, including cross-border products and those based on quantitative investment strategies, the U.S. investment bank said Friday in a statement.

The China Securities Regulatory Commission (CSRC) released draft rules Friday that stipulate the standards, as well as requirements for the management and sales of such products. The CSRC is soliciting public feedback on the draft before July 24.

Ping An Securities hit by business ban for Leshi sponsorship

Ping An Securities was suspended from sponsoring any initial public offerings for three months as a penalty for its role in the scandal-plagued 2010 share sale of Leshi Internet Information and Technology, the Shenzhen branch of China’s top securities regulatory body ruled Friday.

Ping An, the brokerage arm of Chinese insurance giant Ping An Insurance Group, was accused of flaws in due diligence and internal control when it performed as the IPO sponsor of Leshi, the Shenzhen-listed unit of embattled private conglomerate LeEco.

The China Banking and Insurance Regulatory Commission cleared MYBank’s share placement plan, which shareholders approved in 2021, the commission said Thursday in a statement on its website. No financial details were disclosed.

Editorial: How to keep the economy stable while upholding ‘houses for living, not for speculation’

China’s top legislature approved changes to a law that will subject platform operators to more restrictions in competition and raise penalties for their violations as the country seeks to bolster its year-long antitrust war on tech giants.

A new provision in the law stipulates that business operators engaging in monopolistic practices that involve abusing their data, algorithms, technology or capital advantages, or the rules for online platforms, may be banned.

After stepping back from JD.com, Richard Liu sells down his stake

Richard Liu, founder and chairman of JD.com Inc., has been selling down his holdings in the Chinese e-commerce giant over the last month, cashing out about $932 million, exchange filings show.

The move may shore up the telecom equipment giant’s push into the auto industry as it tries to expand its revenue base after U.S. sanctions battered its smartphone business.