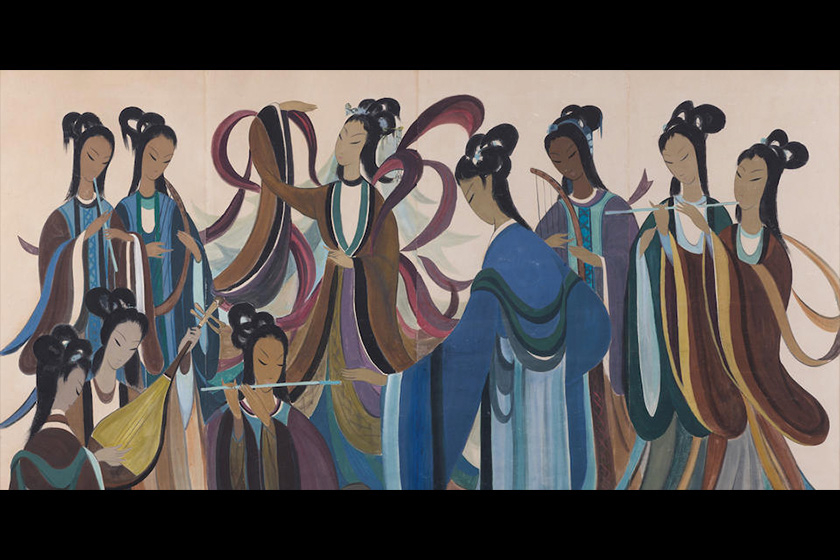 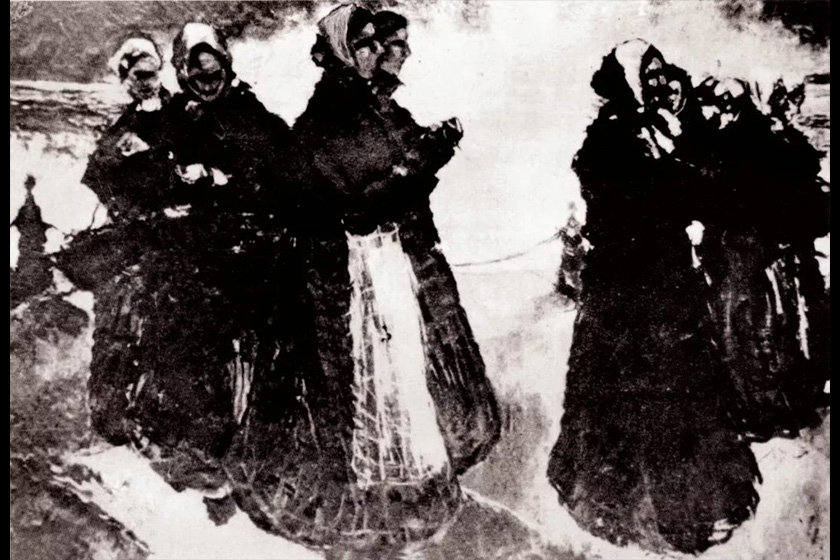 “Fishing Village After the Storm,” oil on canvas, by Lin in 1923 in Berlin. The painting depicts village women waiting anxiously by the sea after a storm. Lin went to Berlin in 1923 for a study tour, where he was influenced by German Expressionists. 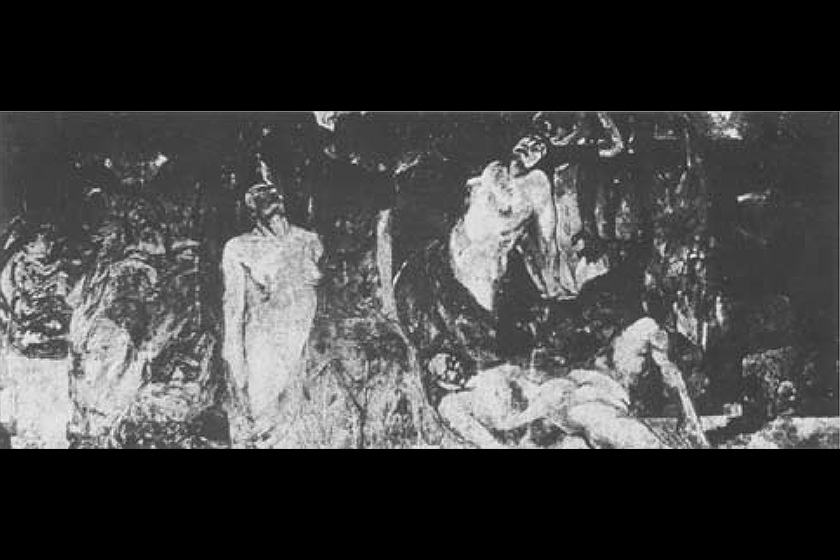 “Suffering,” oil on canvas, by Lin in 1929. The depiction of pain was a feature in many of Lin’s paintings. Photo: lcsd.gov.hk 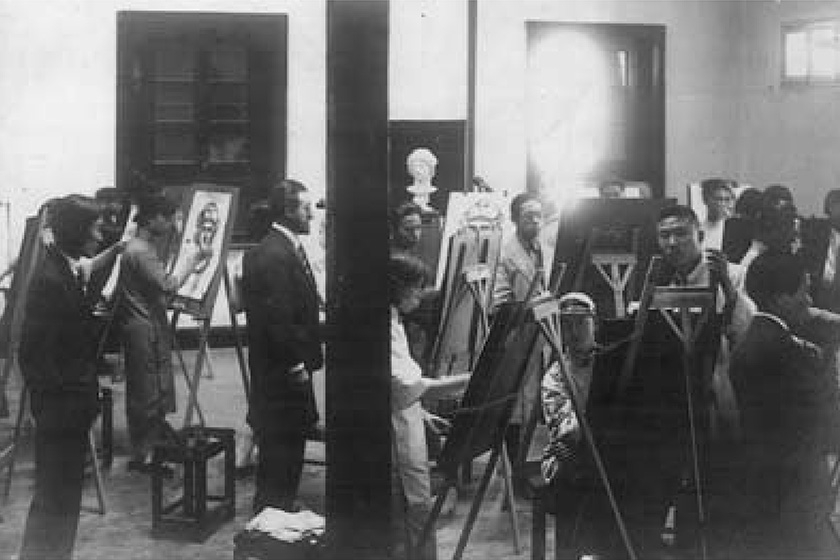 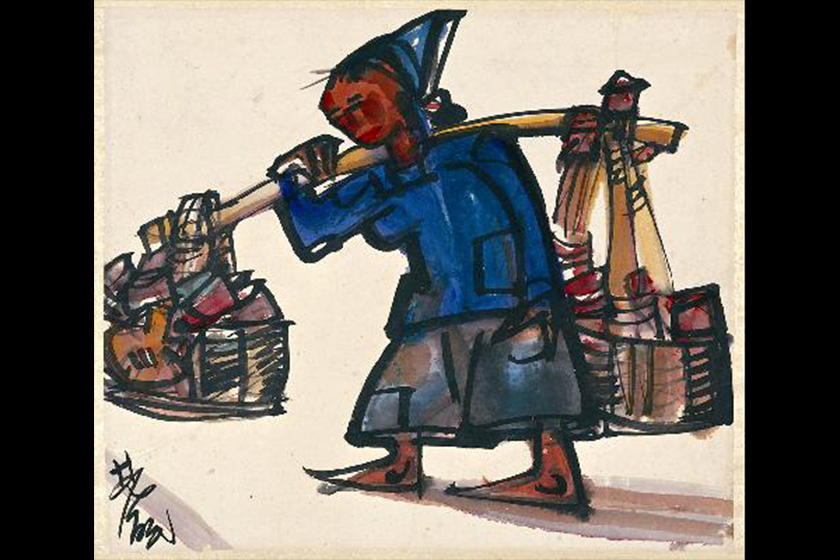 Painted in 1938 by Lin, this art piece depicts a hawker. That year, Lin and his students left for Hunan to escape the Sino-Japanese War, marking a turning point in Lin’s transition from Western painting to a new style of ink painting with Chinese flavor. Photo: info.gov.hk 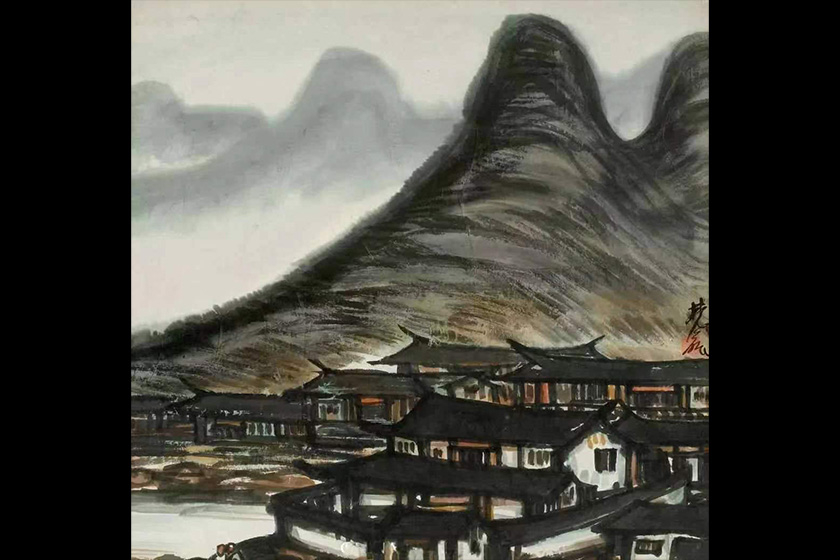 “Living in the Mountains,” color ink on paper, 67 x 67 cm, by Lin in the 1940s. Lin led semi-retired life during that decade to focus on the creation of artwork in Chongqing. Many of Lin’s early works were destroyed by Japanese soldiers during the Sino-Japanese War. Photo: Courtesy of China Guardian Auctions 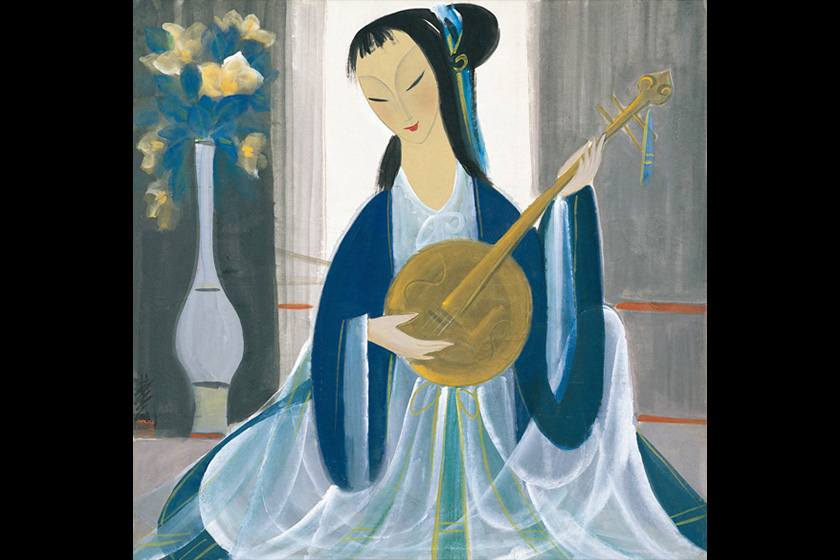 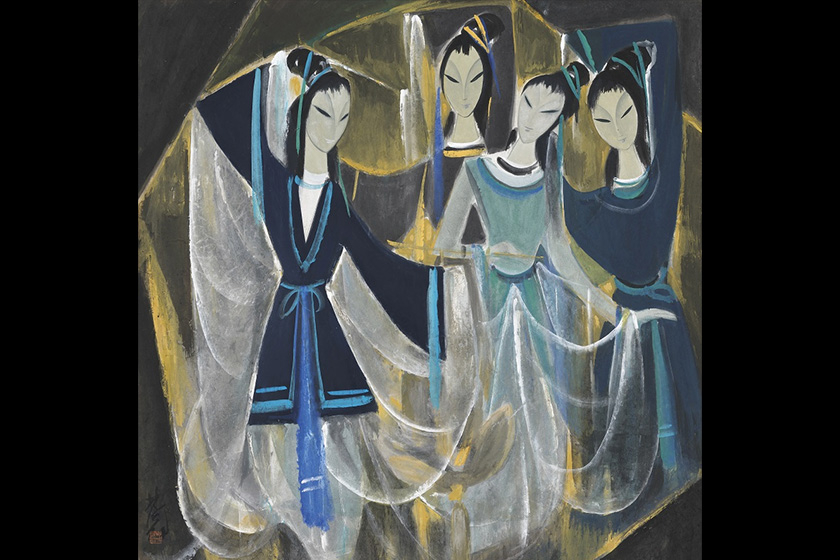 “Opera Figures,” ink and color on paper, 65 x 65 cm. Lin settled in Shanghai in 1951, after resigning from teaching that year. During this period, he often watched the Beijing Opera performances. Paintings such as “Opera Figures” reveal his interest in Matisse portraits during this time. Photo: Courtesy of Christie’s 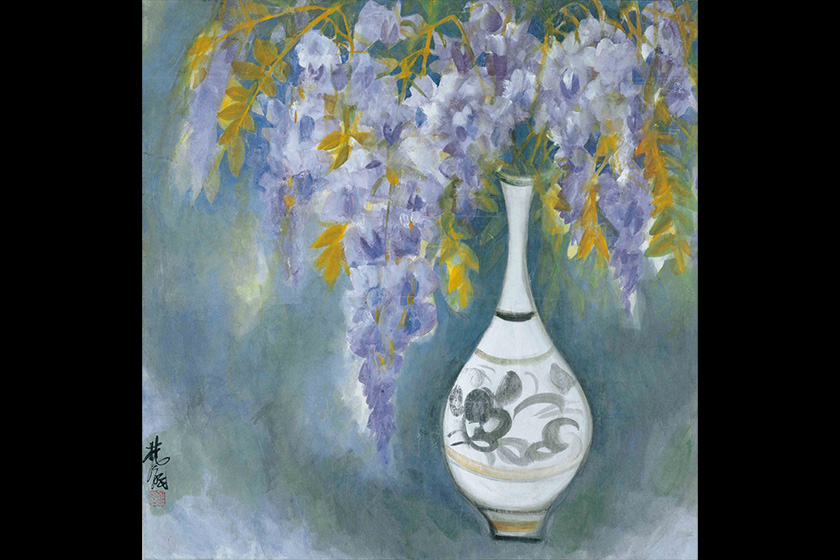 “Flowers in Vase,” ink and color on paper, 68.5 x 69 cm, by Lin during 1950-1953. Still life paintings were also a key feature of his artworks in the Shanghai period. Courtesy of Ravenel 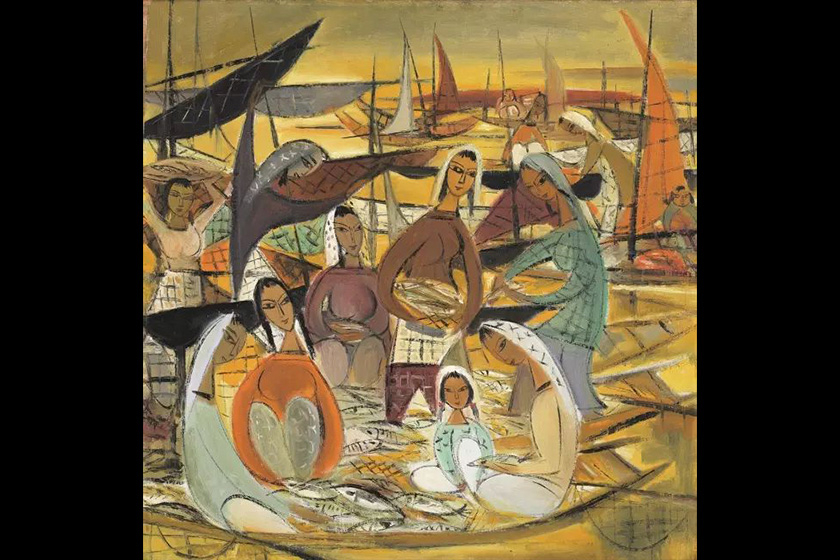 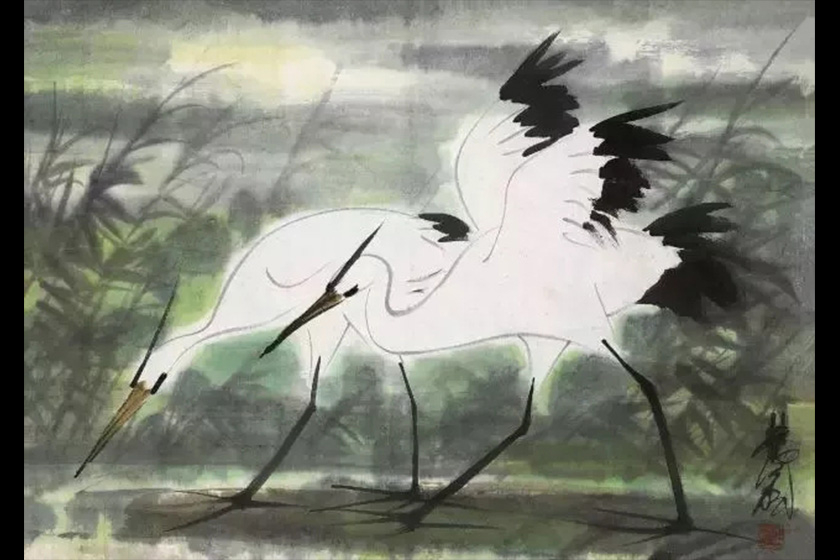 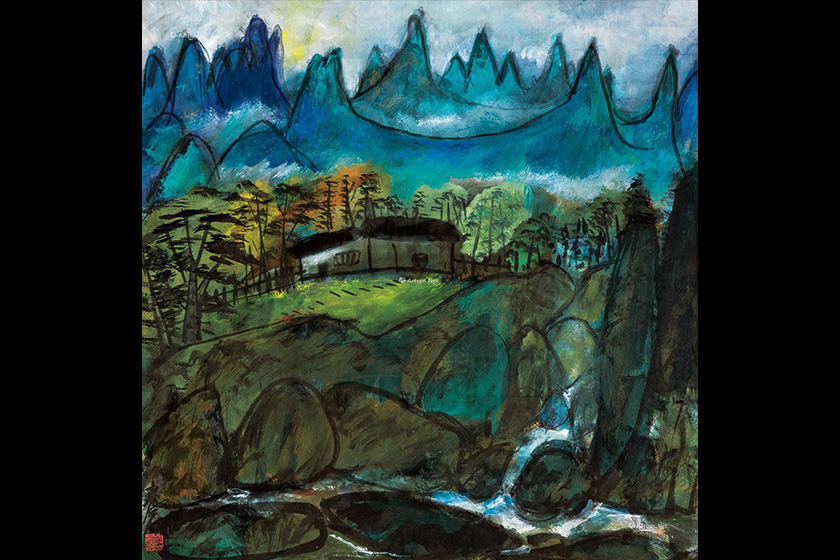 “Landscape,” ink and color on paper, 68.5 x 67.3 cm, by Lin in 1986. The painting was displayed at Lin’s last solo exhibition when he was 90, which was held at the National Museum of History in Taiwan. Photo: Courtesy of Sothebys 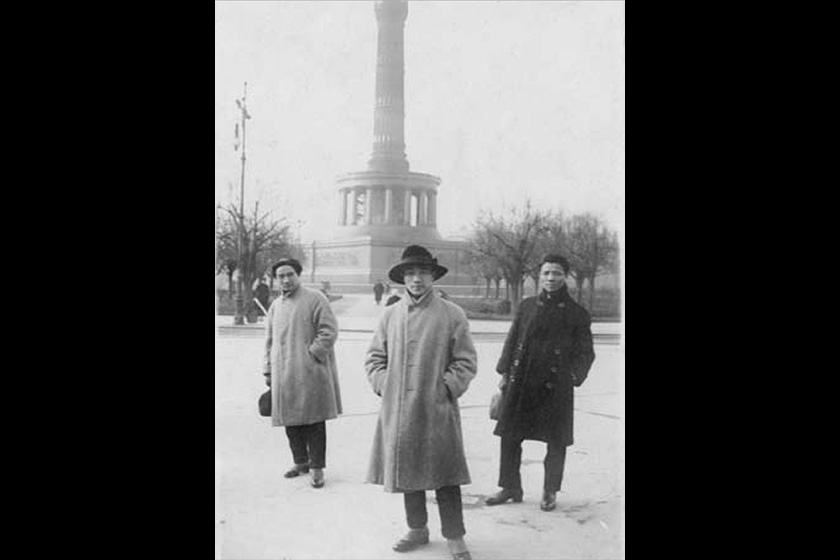 Lin Fengmian (middle) in Berlin. Lin spent the early years of his career in Europe, moving to the prestigious Ecole Nationale Superieure des Beaux-Arts in Paris. In 1920, he learned painting in the studio of Fernand Cormon, who also trained other renowned painters such as Vincent van Gogh. Photo: Photo: lcsd.gov.hk 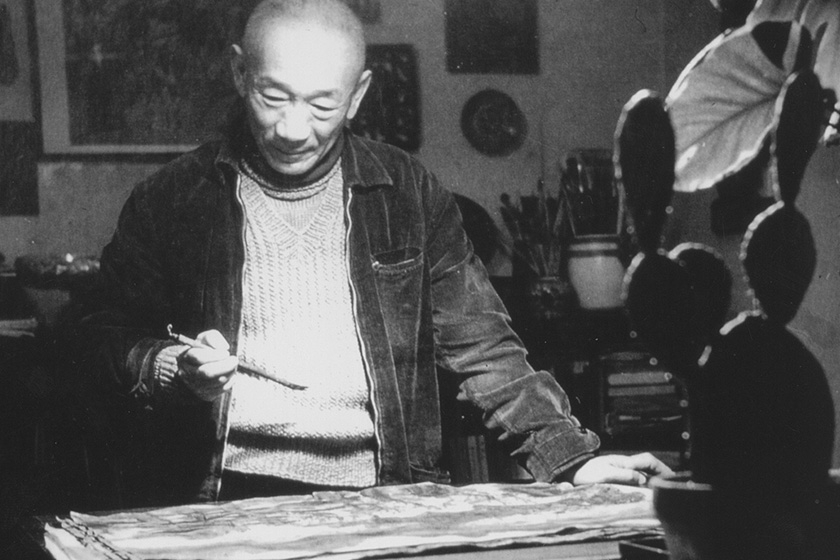 Born in 1900, Lin is considered as a pioneer of modern Chinese painting for his blending Eastern and Western styles. Lin was one of the earliest Chinese painters to study in Europe and an important innovator in the area of Chinese art education. Photo: VCG