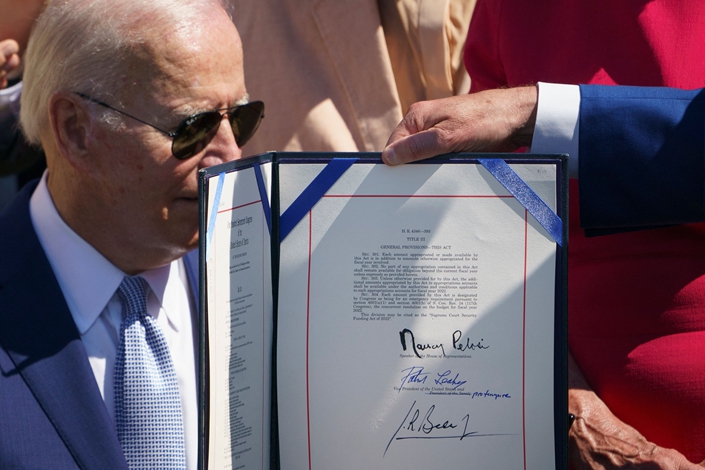 The CHIPS and Science Act of 2022 was signed by U.S. President Joe Biden on Aug. 9. Photo: VCG

A new law that could force chipmakers to choose between the U.S. and China is just the latest effort to keep the Asian giant from moving up the semiconductor supply chain

Breaking the Ice in the China-U.S. Audit Standoff

How a preliminary accord between regulators could help keep as many as 200 Chinese stocks worth over $1.5 trillion trading in the U.S.

The national economy grew just 0.4% in the second quarter, with coronavirus lockdowns the main culprit

Top Officials Fan Out Across China to Fend Off a Slowdown

Amid spreading mortgage strike over paid-for but undelivered units, three policy banks will dole out credits for local authorities to push project completion

In Depth: Why Chinese Companies Hesitate to Hedge Forex Risk

The central government has been trying to get more foreign-trade firms to protect themselves in the face of this year’s swings in the yuan exchange rate, but companies have reasons to be reluctant

Published by the Civil Aviation Administration, the plan provides a peek at how policymakers expect the country’s unmanned aerial passenger vehicle industry to evolve over the next decade

A record heat wave and drought have sapped hydropower generation, dragging on the economy and forcing a rethink of future electricity supplies

People from the Chinese mainland travelling to Macao on tourist visas can get BNT162b2, also known as Comirnaty, for $125

Communist Party’s 20th National Congress to Kick Off on Oct. 16

The congress will take stock of the party’s work over the past five years, as well as the valuable experience of Central Committee with ‘Comrade Xi Jinping at its core,’ Xinhua reported

When treatment options run out in China, some patients turn to the U.S., were clinical trials unavailable at home offer a potential and affordable lifeline

The latest on the multibillion-dollar swindle that shook the nation