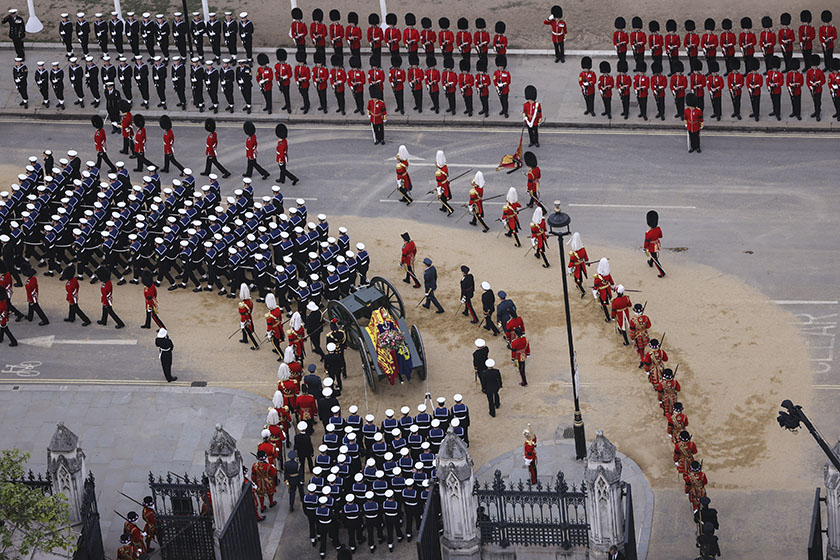 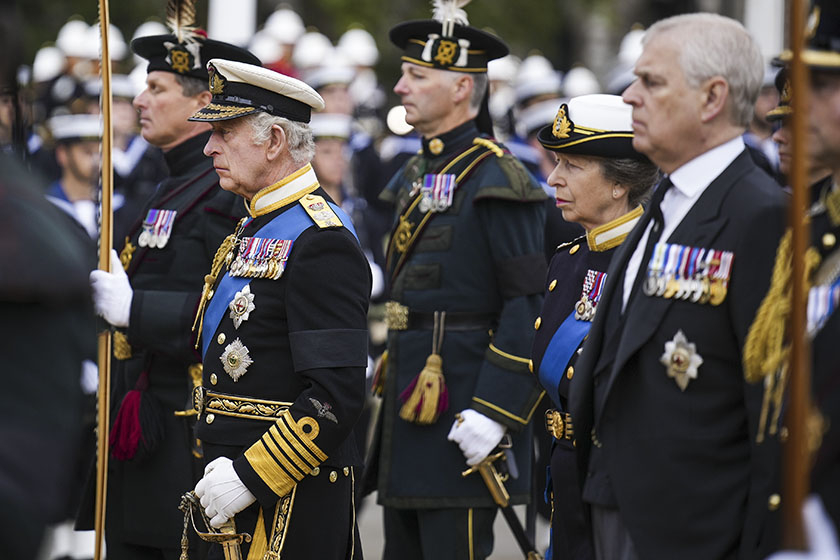 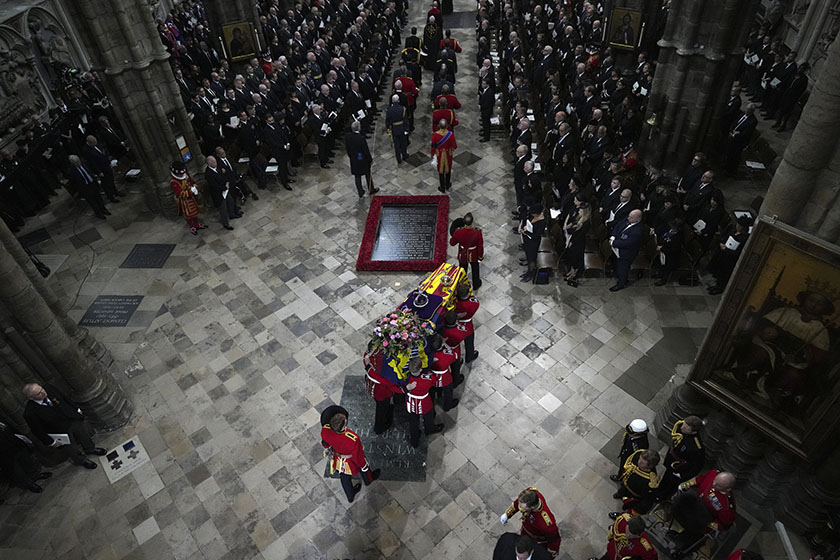 The coffin of Queen Elizabeth II is carried into Westminster Abbey for her funeral. The Queen will be buried in St George’s Chapel alongside her husband Prince Philip at Windsor Castle. Photo: Frank Augstein/VCG 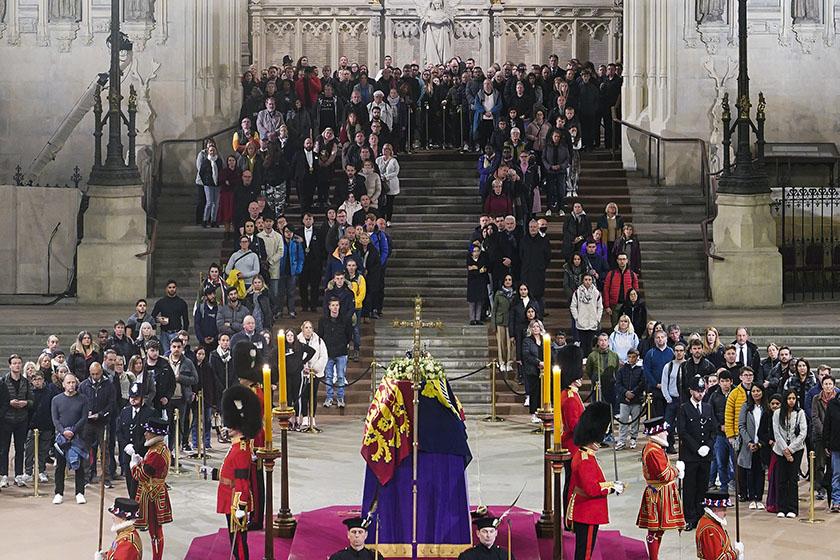 People pay their repects to the Queen at 5:30 a.m. on Monday in Westminster Hall. Her coffin is covered by the flag, the Royal Standard, with the Imperial State Crown and the Sovereign’s orb and sceptre resting on top. Photo: VCG 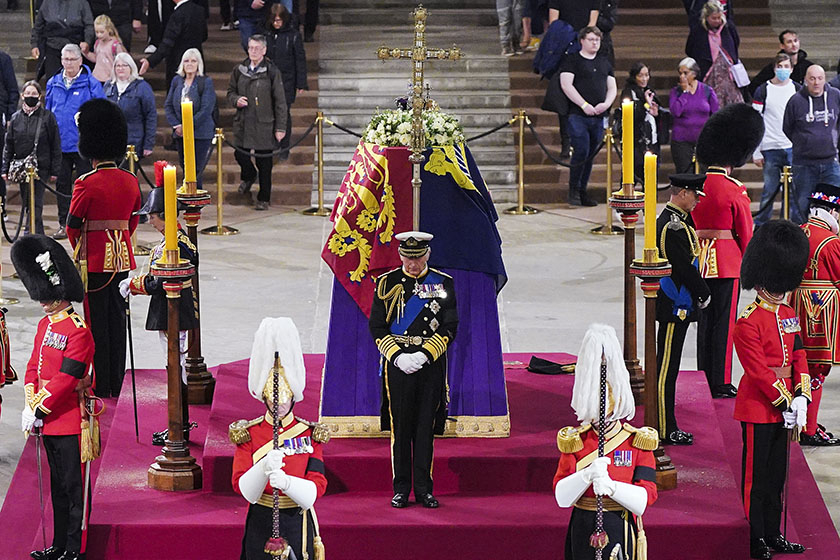 King Charles III at a vigil for the Queen at Westminster Hall in London on Friday. Photo: VCG 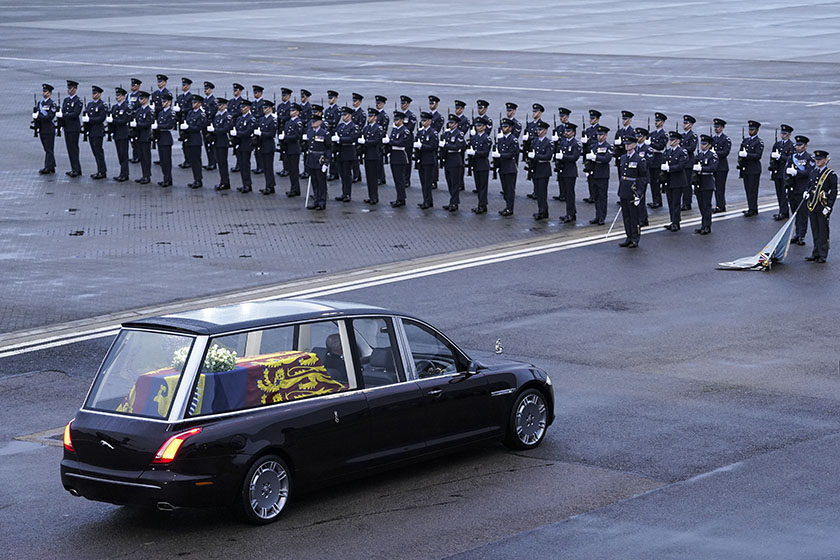 The Queen’s coffin arrived at RAF Northolt in London on Tuesday. Photo: VCG 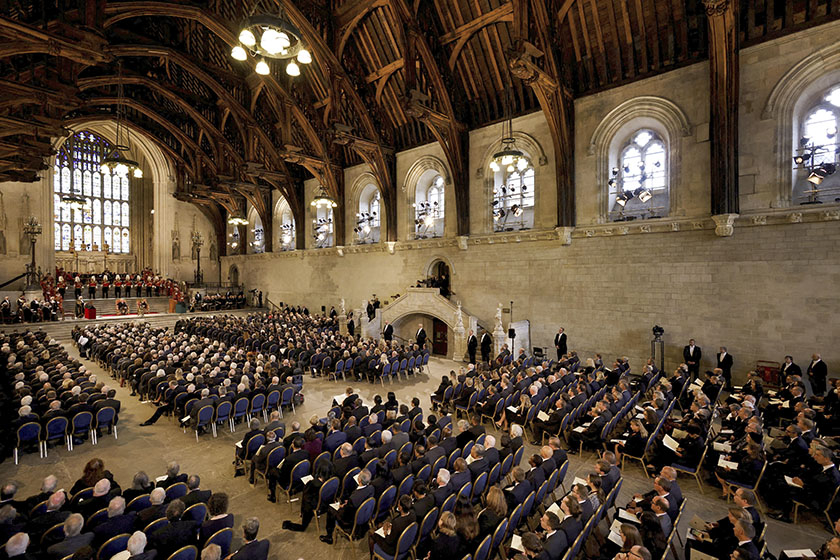 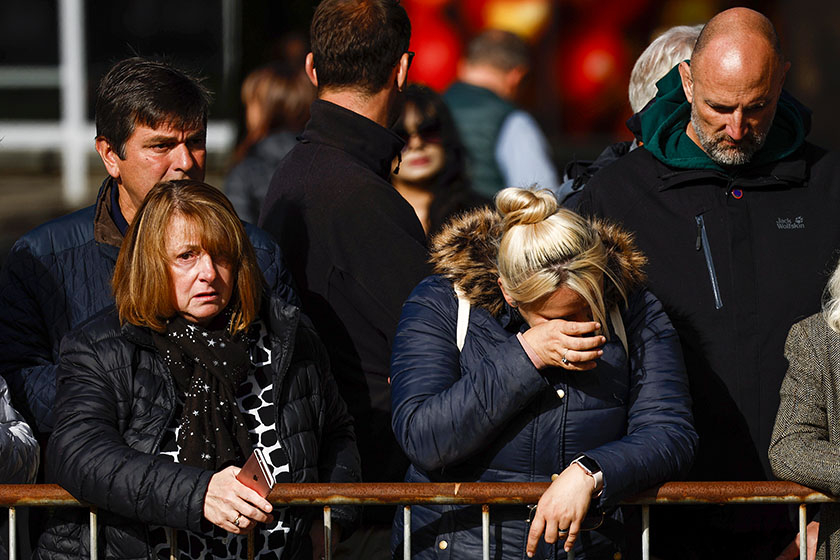 People weep as they watch the cortege carrying the coffin of the Queen pass through Ballater, the U.K., on Sept. 11. Photo: Jeff J Mitchell/VCG 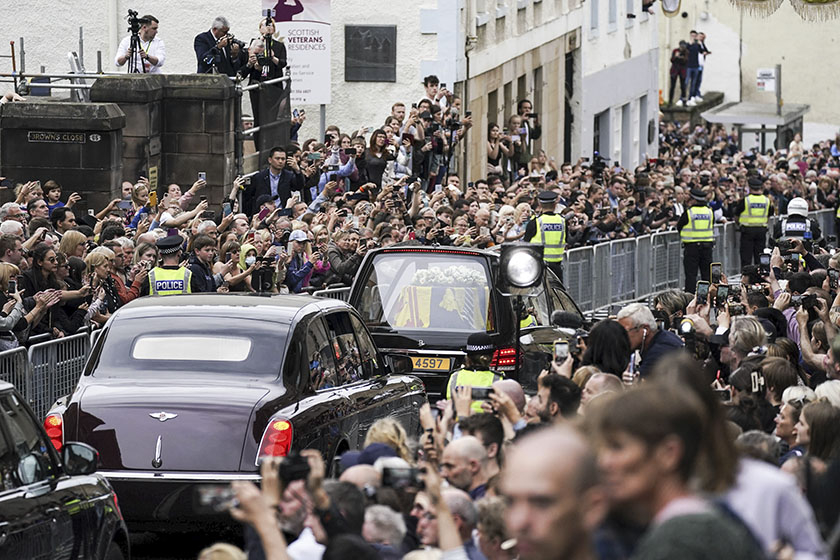 People watch the hearse carrying the coffin of the Queen passing along Canongate towards the Royal Mile as it completes its journey from Balmoral to the Palace of Holyroodhouse in Edinburgh on Sept. 11. Photo: Jacob King/VCG 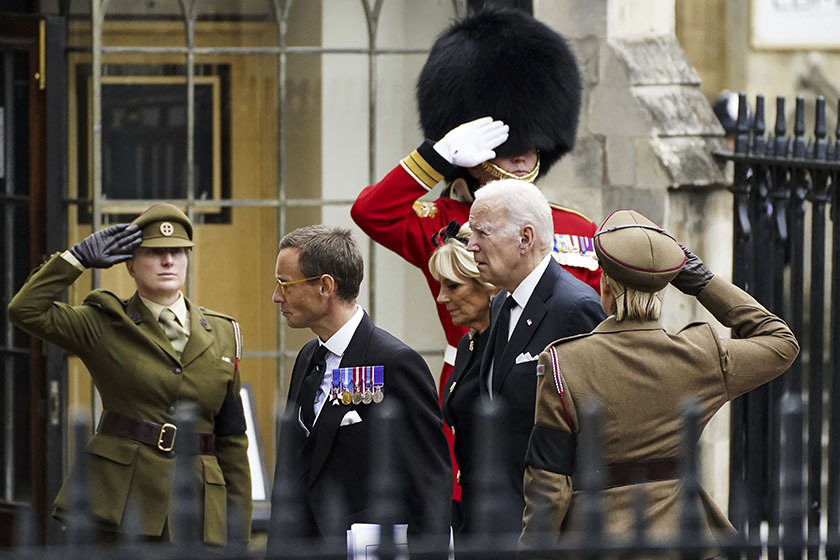 U.S. President Joe Biden arrives with his wife Jill Biden at Westminster Abbey on the day of the Queen’s funeral in central London on Monday. Photo: James Manning/VCG 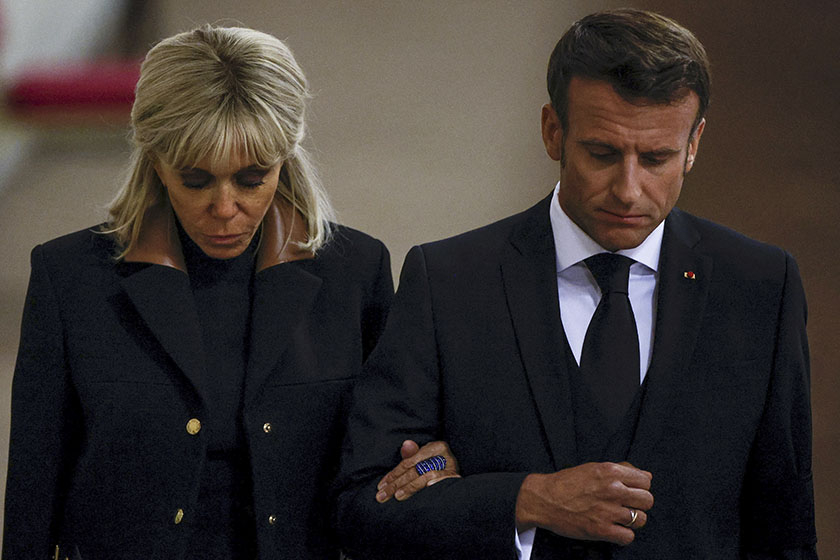 France’s President Emmanuel Macron and wife Brigitte Macron pay their respects to the coffin of the Queen at Westminster Hall on Sunday. Photo: John Sibley/VCG 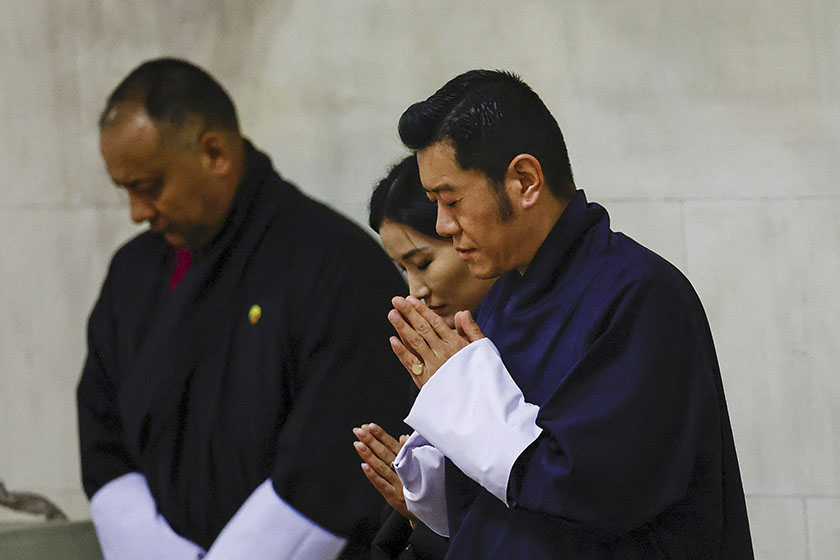 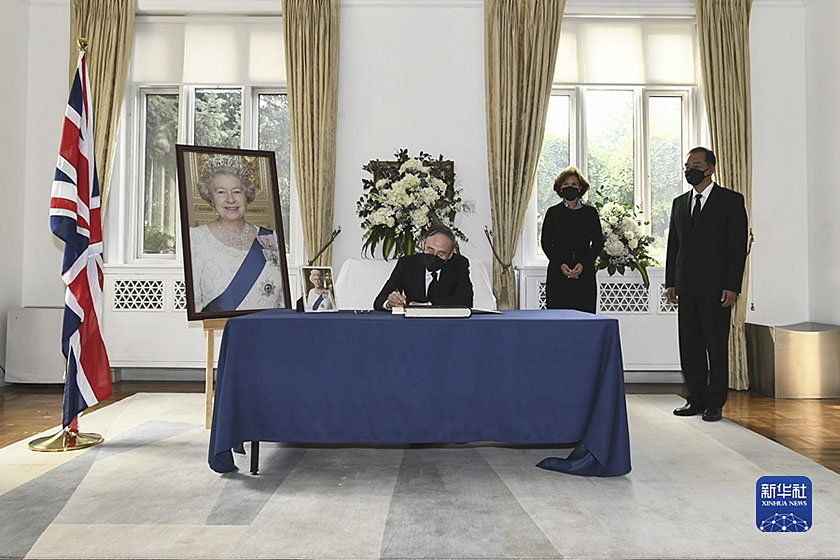 Vice President Wang Qishan signs a book of condolence at the British Embassy in China on Sept. 12. Wang attended the lying in state of the Queen on Sunday and the state funeral on Monday. Photo: Xie Huanchi/Xinhua