Indonesia IT Minister Plays Up Opportunities in Country’s Digital Transformation 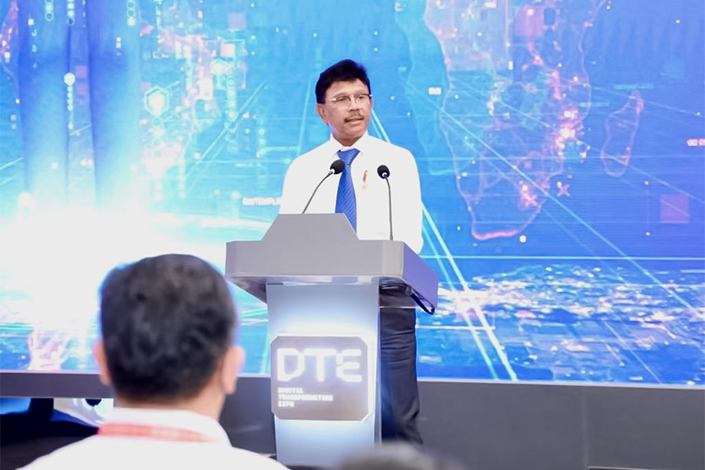 Johnny G. Plate, Indonesia’s Minister of KOMINFO, delivers a speech at the G-20 Summit on Nov. 15. Photo: Provided by KOMINFO

(Bali, Indonesia) — Indonesia’s IT minister touted investment opportunities in the country’s digital economy as data showed that fewer than one-third of its smaller businesses have undergone a digital transformation.

A digital makeover can help the Southeast Asian country’s micro, small, and midsize enterprises (MSMEs) gain “resilience and opportunities” in the face of economic recession and pandemic restrictions, Johnny G. Plate, Indonesia’s minister of communication and information technology, told Caixin in an interview Tuesday at the Group of 20 (G-20) summit in Bali.

A growing number of Indonesia’s MSMEs, which contribute to 60% of its GDP, have already begun to digitalize, according to data from G-20 Digital Economy Working Group. Since the start of the pandemic, the number of MSMEs that have implemented digital strategies has more than doubled to 19 million.

Still, the working group’s data showed that fewer than one-third of the nation’s 64 million MSMEs have digitalized. “The current level of data consumption per capita in Indonesia is very low, which means that there is a lot of room for growth. It opens up a plethora of investment opportunities,” Plate said.

Learning from the pandemic period, Plate said it’s important to “connect the unconnected groups” by increasing efforts in digital infrastructure and to cultivate digital talents in government, companies and academia.

As the global economy becomes more digitized, Plate thinks the world needs to formulate basic principles that cover the transmission of data across borders. Indonesia, which hosted this year’s G-20 summit, put forward “fairness, lawfulness, and transparency” as some of the principles agreed at the G-20 Digital Economy Ministerial Meeting in September.

Plate also pointed out that companies and digital platforms “in any country must comply with local regulations,” stressing that administrative registration is “very important” in order to trace accountability.

In August, the Indonesian government suspended the operations of Yahoo, PayPal and several gaming sites in the country for failing to comply with licensing rules.

During a meeting with Plate in September, the Chinese Ambassador to Indonesia Lu Kang said the digital economies of the two countries have “great potential and broad prospects.”