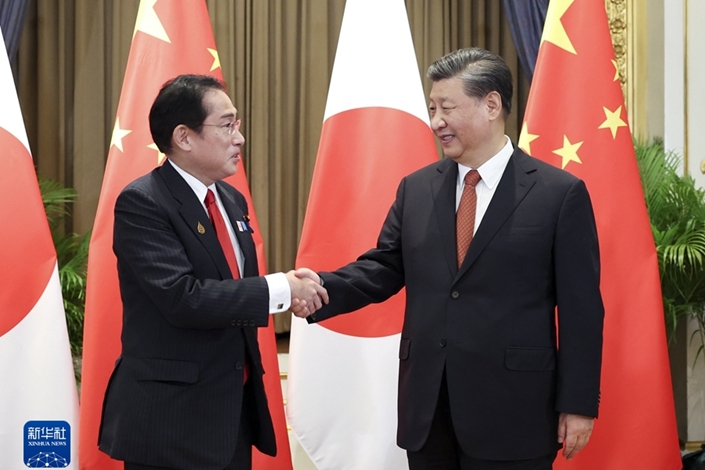 China and Japan will move quickly to open a direct phone line under the maritime and air liaison mechanism, as part of a five-point consensus reached by both countries in developing more stable bilateral ties, according to the Ministry of Foreign Affairs.

The consensus was released after President Xi Jinping and Japanese Prime Minister Fumio Kishida met in Bangkok, Thailand on the sidelines of the Asia-Pacific Economic Cooperation (APEC) summit. It was the first in-person meeting between the leaders of the world’s second- and third-largest economies in almost three years.

“The importance of China-Japan relations has not and will not change,” the consensus said as both sides agreed to intensify high-level exchanges to improve mutual trust while following through on the political consensus of being “partners, not threats.”

Amid heightened regional tensions in the Taiwan Strait, both sides also pledged to “shoulder the responsibility of maintaining international and regional peace and prosperity” in response to global challenges, the release from the foreign affairs ministry noted.

Xi told Kishida the issue of Taiwan must be handled “in good faith and appropriately” on Thursday. The maritime and air liaison mechanism between the Chinese and Japanese defense departments was first established in 2018 and is aimed at averting accidental clashes in the air and at sea.

Tensions over the Taiwan Strait were heightened this summer after U.S. House Speaker Nancy Pelosi visited the island, and Japan claimed some of the People's Liberation Army drills carried out afterwards entered its exclusive economic zone.

China has been Japan’s largest trading partner for more than a decade and Japan is China’s fourth largest trading partner, according to the foreign ministry. As part of the consensus, both sides had pledged more economic dialogue to provide a “fair, non-discriminatory and predictable” business environment for enterprises, highlighting cooperation focus in energy conservation, environment protection and health care fields.

The two countries also agreed to facilitate cultural exchanges on national and local levels as well as among youth groups, adding that a new round of meetings on the high-level consultation mechanism for person-to-person exchanges should be held soon.