Editorial: China and U.S. Can Prevent a New Cold War 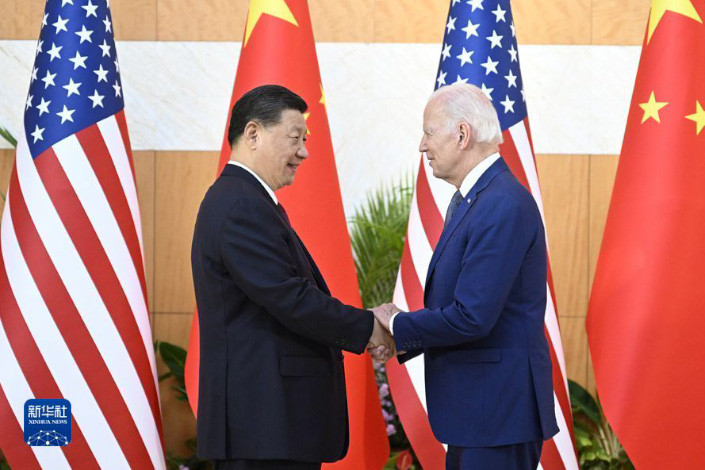 The meeting between President Xi Jinping and U.S. counterpart Joe Biden in Bali, Indonesia, was one that garnered worldwide attention. Based on statements released from the Chinese side, the meeting in Bali “achieved the intended purpose of having in-depth communication, clarifying intentions, making clear where the red lines are, preventing conflicts, setting the direction and exploring cooperation.” It demonstrates that communication has always been one of the solutions to China-U.S. bilateral disputes, conflicts and confrontations, no matter how serious they are. Cooperation is the best choice for China-U.S. relations, and the two countries see no need for a new Cold War.

China and the U.S. represent the most significant bilateral relationship in the world, which matters to global peace and development. In recent years, however, China-U.S. relations have been deteriorating and seemed to be falling into the so-called “Thucydides’ trap,” triggering the new Cold War concern. The two presidents responded to this concern at the meeting. President Xi Jinping said that China-U.S. relations should not be a zero-sum game where one side out-competes or thrives at the expense of the other, and that the world in the 21st century must avoid repeating the mistakes of the Cold War. The two sides should form a correct perception of each other’s domestic and foreign policies and strategic intentions. China-U.S. interactions should be defined by dialogue and win-win cooperation, not confrontation or zero-sum competition. President Biden stated that the U.S. respects China’s system, it does not seek a new Cold War, it does not seek to revitalize alliances against China and it has no intention to have a conflict with China or to contain China. Thus, neither the Cold War nor a new Cold War is a choice for both countries. The meeting identified a clear direction to prevent China-U.S. relations from getting out of control and sought to find the right way for the two countries to get along with each other. Avoiding a new Cold War is the premise.

The two major countries do not need a new Cold War because it neither conforms to the fundamental interests of both countries and their people nor meets the expectation of the international community. In addition, even though some attempt to start a new Cold War, it will be difficult to achieve victory and not worth the effort.

History tells us that China and the U.S. both gain from cooperation and lose from confrontation. The close economic and trade ties between the two countries have most significantly driven and stabilized the more than 40 years of worldwide economic growth and globalization process. China’s brilliant achievements in reform and opening-up have largely been attributed both to the Chinese people’s hard work and the positive China-U.S. bilateral ties that have weathered several ups and downs.

Currently, the world is faced with a persistent pandemic, a global recession risk, climate change, an energy shortage, food security issues and tense geopolitics. In the face of these crises, how countries can muster an effective, coordinated response remains to be seen, let alone they are constrained by one another. As China is the world’s largest developing country, while the U.S. is one of the most developed countries, and both are permanent members of the United Nations Security Council, China and the U.S. should bear the duty as major countries. A new Cold War is emphatically not a wise choice for politicians of both countries.

A new Cold War is repugnant. Today’s world is no longer a stage for major powers to stir up bloc confrontation. The Cold War mentality has long been outdated. Forcing other countries to take sides will only leave them in a tough spot. With the convening of the 27th Conference of the Parties to the United Nations Framework Convention on Climate Change, leaders meetings on East Asia cooperation, Group of 20 Heads of State and Government Summit, Asia-Pacific Economic Cooperation summit, and other international events, the international community is shaking off geopolitical conflicts and tensions between major countries, devoting energy and resources to global climate change, regional and global economic and trade cooperation, international poverty reduction, energy and food security, infrastructure upgrading and bridging digital gaps. Unilateralism runs counter to the tide and only invites self-inflicted problems.

Despite the solemn commitment of the two leaders, there are some who still insist on instigating a new Cold War. But it will be hard for them to have their way. The two countries’ comprehensive national strength indicates that it is difficult for one side to out-compete or thrive at the expense of the other in a short time and a new Cold War will entail high costs. The trade war with China started by Trump is a warning. The U.S. negotiating team was aggressive at the beginning of the trade war, but the reality is that the China-U.S. trade volume increased year after year, with the hopes of the U.S. dashed. The underlying reason is that the world’s top two economies have been deeply integrated with each other. This is a world away from the negligible economic and trade links between the U.S. and the Soviet Union during the Cold War. Today, the U.S. insists on the trade war, and even advocates the tech war, by building walls and barriers, pushing for decoupling and severing supply chains. However, even if the U.S. harms China’s interests to some extent, by doing so, it will only do great harm to itself eventually.

According to Chinese foreign ministry, the relevant working teams of China and the U.S. will promptly implement the important common understandings reached by the two heads of state and take concrete actions to put China-U.S. relations back on the track of steady development. Some interrupted or suspended communication channels between the two sides promise to gradually resume, which heralds the resumption and launch of more exchanges and cooperation between them at all levels. “To make the list of cooperation longer rather than shorter” should be fulfilled through the practical efforts of visionary people of the two countries.

To this end, both sides should face up to the consequences of their worsening relations over the past few years and actively bridge the trust deficit. One priority for both sides is to cultivate and guide friendly relations between their people, and to respect mutual histories and realities while avoiding demonizing each other. Deliberate hostility runs counter to the spirit of the diplomacy between the two heads of state.

Of course, a single meeting cannot fix all problems. It still remains to be seen whether relations between the two countries can recover from the slump. Notably, a harmful tendency shows in the current China-U.S. relations, that is, word-deed inconsistency. One example is that the U.S. has gone against the “One-China” principle more than one time. Avoiding a new Cold War should not only be diplomatic parlance. At this meeting, Xi pointed out that China will unswervingly continue reform and opening-up, and pursue advancement mainly with its own strength. This is the essential way for China to achieve modernization and the optimum strategy to prevent and address a new Cold War.