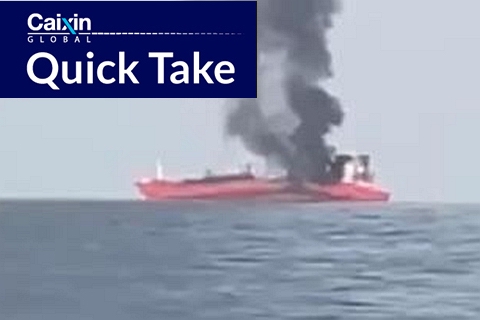 What’s new: An explosion broke an oil tanker in half Tuesday afternoon in the Yellow Sea southeast of Qingdao port in Shandong province.

Reasons for the explosion were under investigation. The incident didn’t cause any oil leakage or spillage. Two spillage response ships were dispatched to the site.

The 128-meter long and 20-meter wide Hongpu 6 tanker was on its way from Tianjin to Qingdao. Several captains told Caixin that the tanker wasn’t loaded with oil when the explosion took place. But the ship still contained more than 100 tons of fuel, posing the risk of leakage, several crew members said.

The background: The Shandong area in the Yellow Sea is usually busy with oil tankers. The volume of oil transported by ships in Shandong province’s coastal ports has increased by about 15% annually for 10 consecutive years, posing challenges to maritime emergency response operations, a government report said.

A tanker carrying around 1 million barrels of bitumen mix was involved in a collision near Qingdao during heavy fog on April 27, 2021, spilling 9,400 tons of oil into the sea. The government reported that the incident caused 6.2 billion yuan ($915 million) of damage and that it would take more than 10 years for fishery resources in the area to recover to the pre-spill level.