Smoking the Peace Pipe during a Cross-Strait Pow-Wow 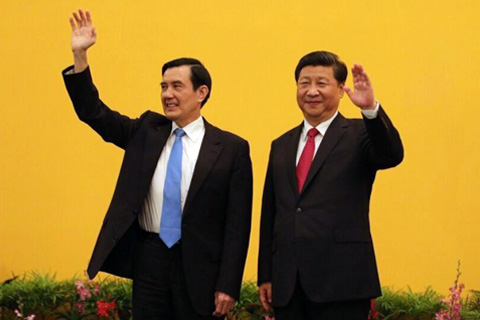 The rendezvous of Xi Jinping and Ma Ying-jeou on November 7 made history, as the leaders of the mainland and Taiwan held hands in photo ops and talked behind closed doors in Singapore. Apart from the symbolism, the carefully choreographed meeting reaffirms the framework for engagement across the Taiwan Strait.

In separate pledges, Messrs Xi and Ma upheld the "92 Consensus," in which representatives of the two sides agreed to the "one China" principle, but reserved the right to interpret the meaning of the term on their own. In practice, it connotes no reunification, no independence and no armed conflict, at least in the short to medium term. Despite a denial by Taiwan's pro-independence activists that a "consensus" ever existed, the mutual understanding has underpinned the cross-strait status quo for over two decades.

The People's Republic of China on the mainland and Republic of China in Taiwan have competing claims on "one China'' as a legacy of the Civil War, which did not officially end after the Nationalists fled to Taiwan in 1949.

The reaction in Taiwan to the Singapore pow-wow was overwhelmingly favorable, and the United States and Japan also applauded its peaceful intentions. Tsai Ing-wen, the Taiwanese opposition candidate set to win the presidency in January, has yet to acquiesce to or challenge the framework.

The appeal of status quo to the people in Taiwan is huge, and polls repeatedly indicate that the vast majority of voters favor stability. A candidate running for the top office must cater to this desire in order to be elected. Once in office, if a pro-independence president pushes his agenda too far, he risks losing popular support. Such was the case with Chen Shui-bian, Ma's predecessor. The mainland always looms large in Taiwan's politics.

With only weeks to go before the election in Taiwan, the Nationalist Party is faring badly. A series of political missteps led to its resounding defeat in local elections last year. Ma is stepping down after two terms. Given the grim prospects of winning in 2016, potential candidates within the party were reluctant to step up to the plate. The exception was the feisty legislator Hung Hsiu-chu, but her reunification stance stirred up too much controversy. She was replaced by party chair Eric Chu as Tsai's challenger.

Tsai, who lost to Ma four years ago, is a savvy politician. In her campaign, she declares that one must neither equate the Democratic Progressive Party to Taiwan, nor the Nationalist Party to the Republic of China. Her plan is to strip the Nationalists of their monopoly on the Republic of China and use it as a shell company, deepening de facto independence and biding her time before she effects a name change later.

From all indications, Tsai is not in a hurry to change the name of the island's government because the Republic of China, after years of being banished from the international community, has built a brand that stands for democracy, civil society and quality of life. Although it is increasingly economically dependent on the mainland, Taiwan has developed its own identity and soft power.

In Singapore, Xi used a folksy figure of speech to describe the fraternal relationship with Taiwan: "Even when the bones are broken, the tendons still connect." The bone-crushing metaphor sounds a bit heavy to the people of Taiwan. Conversely, the mainland's state media did not air Ma's speech in Singapore, in contrast to the no-holds-barred coverage of the event in Taiwan. Why the censorship and lack of self-confidence? The jarring note again feeds Taiwan's existential angst. No wonder the status quo is the safe default choice.