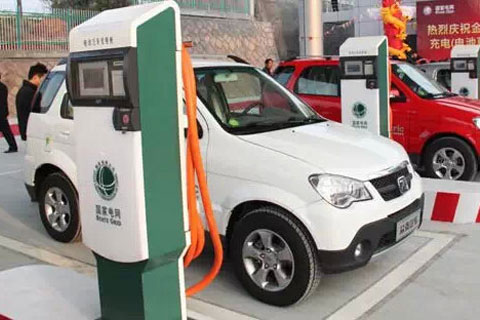 The production of electric cars in China, and their sales, have both grown threefold in 2015, owing to generous government subsidies. Although several carmakers were accused of abusing the subsidy program earlier this year, Beijing's support for electric vehicle manufacturers has remained unchanged. My team and I believe the industry's compound annual growth rate will exceed 23 percent over the next five years.

UBS Securities estimates that central and local governments have doled out 90 billion yuan to electric vehicle manufacturers, buyers, battery developers and charging station developers. These favorable terms attracted over 100 billion yuan worth of investments to the industry.

Electric cars existed even in the early days of the automobile industry. In 1900, electric powered vehicles accounted for about 50 percent of the global automobile market. Large-scale oil exploration, however, led to lower fuel prices and boosted the development of vehicles running on petrol and diesel. Electric vehicles again drew public attention after the 1973 oil crisis, but over the following decades, the market share for alternative-energy vehicles remained merely 1 percent, due to the dominance of cheaper petroleum engines.

At present, a drop in the cost of producing batteries that are becoming more efficient and the development of advanced materials have made it possible to mass produce electric vehicles. But over the next five years, manufacturers would struggle to compete with makers of vehicles using fossil fuel. But further breakthroughs in battery technology over the next decade will bring electric cars within the reach of most ordinary households.

The national strategy to boost the alternative-energy vehicle market will allow China to reduce its reliance on crude oil – of which 60 percent is imported – reduce pollution and develop a more competitive manufacturing sector.

Many are comparing the Chinese government's push for electric vehicles to its earlier efforts to pump up growth in the high-speed rail sector. Prior to 2008, the country had 800-kilometers of high-speed rail tracks. But in less than a decade, the total length of its high-speed rail links more than doubled to 19,000 kilometers. This amounts to about 50 percent of all global bullet train tracks. The average investment on a high-speed rail line is about 120 million yuan per kilometer, which means China invested more than 2 trillion yuan between 2011 and 2015 to develop its vast rail network. A significant part of this investment was funded through bank loans. Critics say this great leap has come at a high cost and point to the inefficient use of resources, but it has also made the country's high-speed rail technology competitive internationally.

The government is the major driving force behind the growth in both high-speed rail and electric vehicles. The policy-driven growth comes at a great cost. For example, sales of concrete machinery in 2015 were 95 percent less compared to the figure in 2011, when high-speed rail construction peaked. The sharp decline reflected serious problems of overcapacity caused by a sudden construction boom, which also triggered corruption and other social issues.

Similar problems are cropping up in the electric car industry. The subsidy has lured many consumers to buy hybrid cars, but some said they seldom used the electric-powered system.

The carbon emissions of an electric vehicle was not significantly lower than that of a fossil-fueled one if ones takes into account the pollution caused by coal burning and battery recycling. There are no clear solutions to these problems yet.

But China's electric vehicle industry has taken off, backed by generous government support. Although the government has started to gradually reduce the subsidy and eliminate it by 2020, we believe automakers will continue producing electric cars, due to tightening emission standards and declining production costs. UBS predicts electric car sales in China will hit the 1 million mark in 2020 and foresees robust growth beyond that.