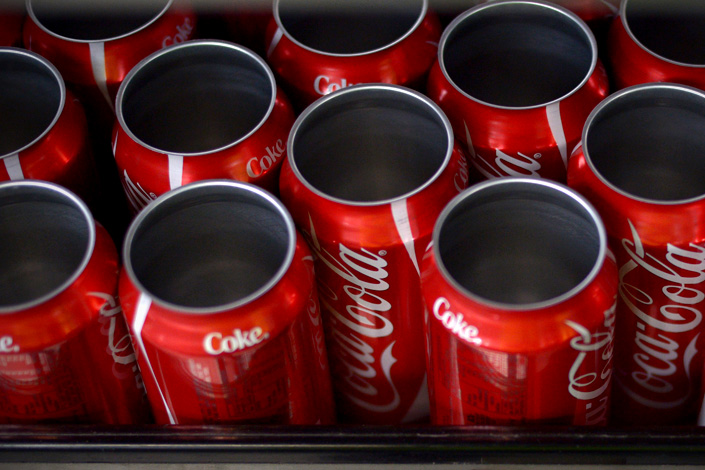 As memories of a "golden decade" of soft drink sales fade in China, global beverage kingpin Coca-Cola Co. is tasting the future by transferring its mainland bottling business to long-time franchisees.

Coca-Cola's pending bottling divestment, which has been valued by analysts at about $1 billion, is one of at least three recently announced deals reflecting a changing landscape for the beverage business in the world's second-largest economy.

The American maker of sodas, juices and bottled water says despite the divestment plan, it remains fully committed to the mainland market and will invest $4 billion in China through 2017. Sales of Coca-Cola products and its flagship soda — called "kekou kele" in Chinese — have risen in step with the nation's decades-long reform and opening-up campaign.

But under a deal announced in November and now pending Chinese government approval, Coca-Cola will sell its 13 bottling plants and related operations on the mainland to longtime franchisees Swire Beverage Holdings Ltd. and COFCO Coca-Cola Beverages Ltd.

Swire Beverage is a subsidiary of Hong Kong-listed Swire Pacific Ltd., which is tied to a conglomerate of the same name. COFCO Coca-Cola is a unit of state-owned China Foods Ltd. (COFCO), an agricultural and foods products behemoth.

The bottling plant deal for an undisclosed amount will end an arrangement through which the franchisees and Coca-Cola's Bottling Investment Group (B.I.G.) have for years shared the mainland bottling business.

Uni-President, one of Asia's largest food conglomerates, announced in November that it will sell its mainland soft drink subsidiary Jianlibao to a Beijing-based subsidiary of Citic Asset Management for 950 million yuan ($138 million).

The beverage companies are responding to a business climate that reflects changing consumer tastes in China, where urbanites are becoming more health-conscious.

Between 2003 and 2012, which China beverage industry analysts call the sector's "golden decade," soda sales by volume on the mainland increased six times to 130 billion liters. Industrywide revenues jumped to more than 471 billion yuan from 77 billion yuan.

A recent China Food Industry Association report said soda drinks accounted for 10.2% of all mainland beverage sales in 2015, down 0.7 percentage points from the previous year. The report also noted that growth prospects were good for low-calorie and "health" drinks, as well as herbal teas and milk-based beverages.

Coca-Cola said it is shifting its China focus to the beverage concentrate business, which is more profitable than bottling. The selloff is part of a global strategy to lighten the company's asset load by refranchising and focusing on brand-building, while outsourcing product manufacturing and bottling.

Globally, Coca-Cola's business relies heavily on franchising and selling concentrate to bottlers who handle all manufacturing, packaging and retailing. The company has about 250 bottling partners in more than 900 factories around the world.

Coca-Cola said its modern-day strategy in China had never called for permanent control of mainland bottling assets through B.I.G.

"B.I.G.'s ownership of bottling operations in China was a transitional process that allowed us to position the system for long-term sustainable growth," Muhtar Kent, Coca-Cola chairman and CEO said in a press release. Following the divestment, he said, that system will be "under the leadership of strong local partners."

Coca-Cola has done well in China ever since re-entering the country nearly 40 years ago. Today, China is the company's third-largest market, with 140 million beverages consumed daily.

A decades-long hiatus ended in December 1978, less than three weeks before the United States and China restored diplomatic ties, when Coca-Cola signed a deal with COFCO that let shops catering to foreigners in China sell Cokes.

The Coke deal was signed inside the same Beijing hotel where U.S. and Chinese diplomats negotiated their historic agreement in January 1979. Coca-Cola thus became the first multinational with permission to do business in China since bottling plants were nationalized in 1949.

Coca-Cola's China experience has not been without bumps in the road. For example, in 2009, the company's $2.8 billion bid for fruit-juice maker Huiyuan Juice Group was rejected by Chinese regulators on anti-trust grounds.

Coca-Cola worked with Malaysian business tycoon Robert Kuok's Kerry Group between 1993 and 2006, when the latter served as a franchisee with 11 bottling facilities in nine mainland provinces including Sichuan and Yunnan. But the Kerry plants did not live up to expectations and were eventually taken over by B.I.G., whose bottling plants in 19 countries and regions worldwide manufacture about one-fourth of all Coca-Cola products.

Yet Coca-Cola has consistently maintained good relations with COFCO as well as Swire Beverages, with which it has been doing business since 1965, when Swire bought a majority stake in the company's Hong Kong bottling division.

Jin Zihua, Coca-Cola China's spokesman, said a Swire facility produced the first bottles of Coke consumed on the mainland after the 1978 agreement was signed with COFCO.

The company has also invested heavily in China by, for example, sponsoring the 2008 Summer Olympics in Beijing.

Staying in the game

Today, like other multinationals, Coca-Cola is adjusting its China game plan. But it's definitely staying in the game.

"When an industry or business encounters an operational ceiling or dilemma, it innovates from the top," Zhu said. "What we see makes sense in light of the current economic and industry situation. But it is important to note that the main business entities of the companies are not leaving China."

What's happening in China is also happening in other parts of the world where Coca-Cola does business. For example, the company says it cut the percentage of bottlers it owns to 18% last year from 26% in 2014, and plans to eventually shave that to amount to 3%. Moreover, Coca-Cola said in February it planned to sell all U.S. bottling plants by the end of 2017.

Yet Coca-Cola's generally positive experience in China has not been shared by every multinational beverage concern.

Uni-President's sale of Jianlibao, for example, after a 10-year tie-up follows an unsuccessful strategy that leaned on offering a wide range of beverage brands, from a flagship soda to various fruit drinks. The strategy turned sour, though, as Jianlibao's revenues plummeted to 1.6 billion yuan in 2015 from 1.9 billion yuan in 2013.

Danone had a falling-out with Robust after buying the Chinese company, then best known for a yogurt drink with 2 billion yuan in annual sales in 2000. One year after the acquisition, though, a management team led by Robust founder He Boquan resigned to protest Danone's strategy.

Robust's business dwindled over the years until only its bottled water operation remained. Thus, few industry observers were surprised when Danone announced its exit.

"Danone is a holding company that does not have particular attachments to its brands," said a source with direct knowledge of the takeover deal who declined to be named. "Poorly performing assets will naturally be sold."