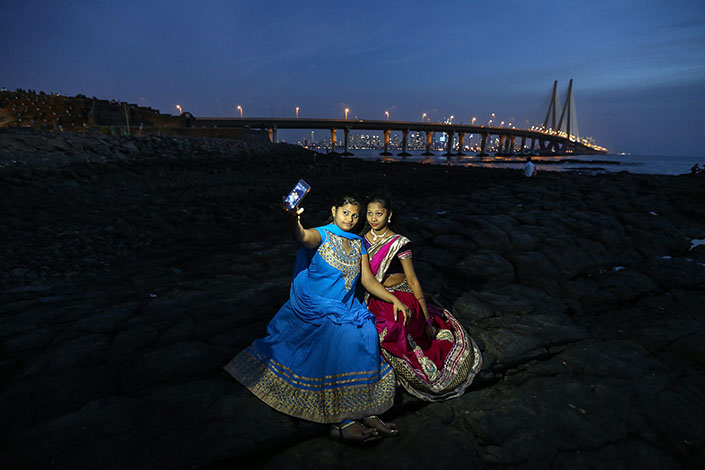 Two women pose for a selfie at a tourist spot near the Arabian Sea in Mumbai, India, in February 2016. According to a research report, Chinese brands captured close to 50% of India's smartphone market share last year, up from 14% in 2015. Photo: IC

(Beijing) — Chinese smartphone vendors have taken four of the top five places in India sales, using competitive prices and successful branding strategies to expand rapidly in a market that is now the world’s third-largest and which has big growth potential.

Chinese brands accounted for nearly half of the 28 million smartphones shipped in India in the final quarter last year, tripling their share from a year earlier, according to new data from two market research firms.

Four Chinese companies — Xiaomi Inc., Oppo Electronics Corp., Lenovo Group Ltd. and Vivo Communication Technology Co. Ltd. — each took about 10% of the Indian market during the quarter, according to the latest data from Canalys and Counterpoint Research. Traditional leader Samsung led the market with a little over 20% share.

Of the Chinese brands, Guangdong-based Oppo and Vivo have enjoyed exponential growth, similar to a meteoric rise last year in their home China market. Oppo, which plans to open a 1.5 billion yuan ($219 million) production base in India, has seen its India sales surge by more than a factor of 15 from a year ago, while Vivo has expanded over six times, according to Canalys.

Analysts attribute the success to the Chinese brands’ models that offer relatively high quality for affordable prices. Strong supply-chain management, combined with marketing campaigns that have begun to pay off, are also factors, they said.

“The core competence of Chinese vendors continues to be wide access in the supply chain,” said James Yan of Counterpoint. “This gave them steady and reliable delivery during periods when components were in short supply.”

Chinese brands have also filled a void between high-end names like Apple Inc. and cheap local brands like Micromax Informatics Ltd., whose phones often sell for less than $100, said Kiranjeet Kaur, an analyst at IDC.

“Everyone wants a durable phone with specs on par with the global vendors,” she said. “These brands have set new trends in India, gaining popularity thanks to generous investments in celebrity spokespersons and sponsoring events.”

She noted that the sudden rise of the Chinese brands was not an anomaly in the last quarter, but the result of a continued drift that began early in 2015.

Other factors that have played a part in the Chinese vendors’ ascent include a migration to smartphones from feature phones in India in the past two years, and the government’s scrapping of its highest-denomination currency notes last year. That switch hurt local brands that are typically sold for cash in street side shops, compared with many Chinese brands that have online distribution.

The Chinese brands have honed their skills in their home market, which is now the world’s largest and also brutally competitive. Now many are looking to export their products, and India has become one of their top destinations.

While there is still significant room for growth, the Chinese brands’ dominance will not come unobstructed, analysts said, adding that India’s rural market may prove much more complicated for international companies.

The foreign brands may also face head winds from a new push for more-affordable 4G feature phones, which will mostly be headed by local players. “China’s smartphone makers stand to lose out if this becomes big and they can’t jump on the bandwagon,” Kaur said.