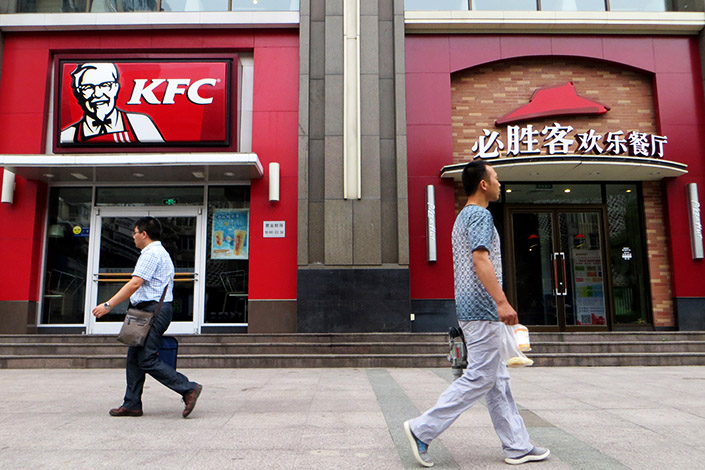 (Beijing) — Fast-food giant Yum China reported flat same-store sales and falling revenue in its maiden quarterly report as it tries to reverse a longer-term decline with more autonomy after a spinoff from its U.S. parent late last year.

The operator of the KFC and Pizza Hut chains in China has struggled in the market over the last five years due to a number of factors, including growing local competition and several food-safety scandals. Both Yum and U.S. rival McDonald’s Corp. have taken steps to overhaul their respective stores by modifying menus and adding features to cater to China’s younger tech-savvy and affluent middle class. Yum China’s moves include plans to introduce Taco Bell restaurants on the mainland. The first and to date only mainland-based Taco Bell officially opened in Shanghai last month.

To give its operations more flexibility, Yum’s U.S. parent spun off its China business late last year and introduced two locally based strategic investors. McDonald’s made a similar move last month by selling a majority of its China restaurants to two partners, including leading financial services conglomerate Citic Group.

Yum China Holdings Inc. said its same-store sales were flat in last year’s fourth quarter and for the entire year, according to its first quarterly financial report released in the U.S. on Tuesday. Same-store sales, a widely watched indicator for retailers, reflect the amount of sales in company stores that have been open at least a year.

Fourth-quarter revenue fell 3% to just under $2 billion. It posted a small profit of $88 million, reversing a $29 million loss from the previous year.

Despite its recent adjustments, Yum still faces a number of headwinds in the market, said Huang Xiaobin, CEO of catering consulting firm Bestown. Those include its reliance on Western-style food in a market that favors local tastes. Another is the rapid rise of internet-based alternatives, most notably a recent boom in online take-out ordering services, Huang said.

“I’m not confident that we’ll see any major improvements for Yum China in the next three years,” he said. “The kinds of changes they’re making will probably take at least five years to show results.”