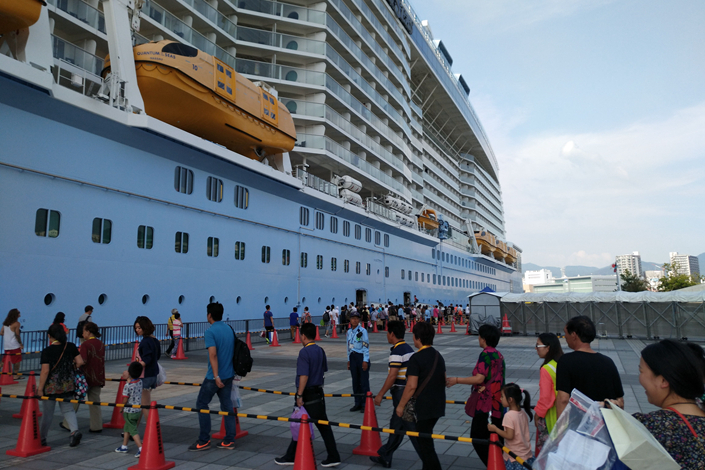 An internetional cruise ship docks in Shanghai in September. China State Shipbuilding Corp. and Italy's Fincantieri SpA will build two cruise ships for a total $1.5 billion for cruise operator Carnival Corp. & PLC, which will use the vessels to serve the Chinese market. Photo: Visual China

(Beijing) — Cruise operator Carnival Corp & PLC said it has ordered two new ships worth a combined $1.5 billion from a Sino-Italian ship-making venture, as it prepares to launch a separate brand to take advantage of the booming Chinese demand for leisure travel.

Carnival’s own China cruising joint venture is placing the order with another joint venture between leading local ship builder China State Shipbuilding Corp. and Italy’s Fincantieri SpA, Carnival said in a statement on Wednesday. The deal includes an option to buy four more ships in the future.

Carnival’s China joint venture announced an initial deal in September, and formalized the agreement at an official signing ceremony in Beijing to coincide with a visit by Italian President Sergio Mattarella. Fincantieri disclosed the $1.5 billion deal value.

Carnival’s China joint venture plans to launch its own local brand for the market, which will initially buy ships from Carnival. It will receive the first of the two new ships in 2023.

“Our cruise joint venture’s agreement to order the first-ever cruise ships built in China … is a tremendous opportunity to grow interest and demand for cruising as part of China's rapidly expanding tourism market,” Carnival Asia CEO Michael Thamm said. “We are very committed to working closely with our partners to further develop the Chinese cruise industry and continue supporting China’s efforts to become one of the leading cruise markets in the world, which will remain a key driver for cruise growth across Asia for many years to come.”

China is rapidly becoming one of the world’s biggest markets for cruise operators, banking on the nation’s fast-growing middle class looking for new vacation ideas. The market has grown at an average annual rate of 66%, reaching about 1 million passengers in 2015, according to the Cruise Lines International Association.

A Carnival executive had said in 2016 that the company expected to welcome about 1 million Chinese customers that year, about double the total from the year before. The company was one of the market’s earliest entrants with its arrival in 2006. Other operators include rival Royal Caribbean Cruises Ltd., one of the world’s other largest companies. Leading Chinese online travel agent Ctrip.com International Ltd. has also entered the business through its investment in a liner operated by Royal Caribbean.