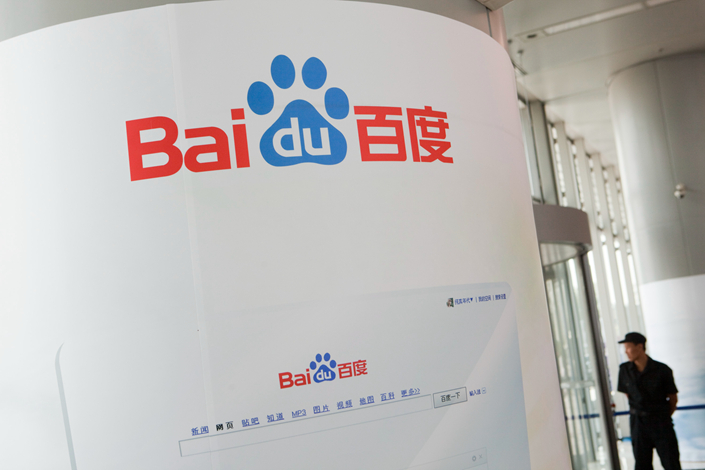 Baidu Inc. said its fourth-quarter profits dropped 38% year-on-year, but predicted a rebound in the next earnings report. Photo: Visual China

Leading search engine Baidu Inc. reported a drop in fourth-quarter revenue but predicted a return to growth in the current quarter as it struggles with lingering fallout from a scandal last year and a drag on profits from its money-losing businesses.

The improving revenue outlook came as Baidu reported its operating profit plunged 38% to 2.2 billion yuan ($320 million) year-on-year as revenue also contracted by 2.6% to 18.2 billion yuan, according to its latest earnings statement released on Thursday. But Baidu forecast the recent revenue declines had bottomed out, and that the figure would rise by 4.2% to 7.6% in the current quarter.

Online marketing revenues related to search-based advertising, which form the core of Baidu’s total, declined 8.2% in the fourth quarter to 16.2 billion yuan. That drop came as the number of Baidu’s active online marketing customers dropped by an even-steeper 18.6% to 452,000 year-on-year.

The company suffered last year when it got caught up in a scandal about advertisements mixed in with its search results. Its online-video, group-buying and takeout-dining units are also losing big money due to stiff competition.

“During the fourth quarter, we largely completed our initiative to ensure that new and existing customers meet our stringent quality requirements,” CFO Jennifer Li said. “We believe that the impact of these initiatives is mostly behind us and we look forward to 2017 as a time of recovery and growth.”

Baidu shares fell 0.7% in Thursday New York trading before the results were announced. The stock lost more than 15% of its value last spring after the transparency scandal broke.

As a result, Baidu was ordered to change its practices and include fewer advertisements on its search pages. It also embarked on a campaign to cleanse itself of low-quality advertisers. At the same time, the company is under pressure from its large but money-losing businesses in takeout dining, online video and group buying, which sap profits from its high-margin search business.

Its shares have gradually climbed back as it overhauls its business and now trade at about 10% below their levels from before last year’s scandal erupted.