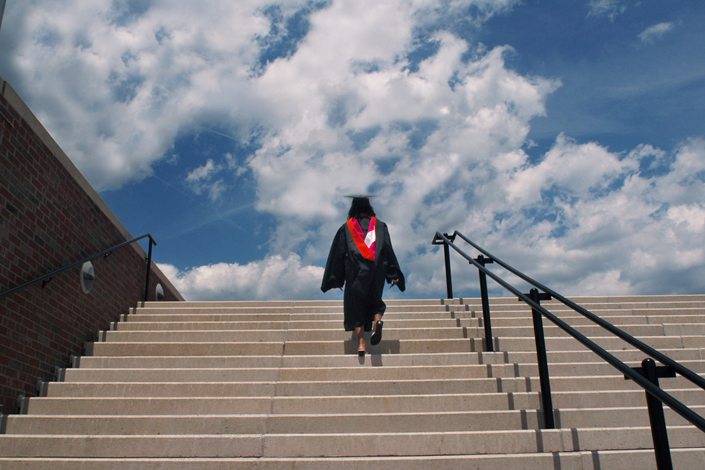 (Beijing) — Eleventh-grader Nox Yang was sitting in class when one of her friends told her that the SAT college entrance exams scheduled for June had been canceled.

Thousands of high school students in China and their parents panicked on Feb. 23 when the College Board, the U.S. nonprofit that runs the SAT tests — a requirement for enrolling in undergraduate programs in most U.S. universities — announced it will reduce the number of testing dates for non-U.S. passport holders from six per year to four for the 2017-18 and 2018-19 school years.

The move created chaos because China does not allow SATs and other foreign college entrance exams to be held on the mainland. As a result, families had to cancel travel plans and scramble for the few testing slots left.

The cancellations are part of an effort to enhance scrutiny at testing centers around the world following a slew of test-stealing and cheating scandals in recent years, the College Board said in a statement. The College Board promised to refund testing fees to those who had already signed up for the June and November exams, which were dropped.

The New York City-based college entrance exam provider said it is also tightening controls to prevent past cheaters from retaking tests and will alert law enforcement agencies in the U.S. and abroad of companies and individuals it suspects of stealing test materials.

The sudden announcement came as a rude surprise for many test-takers like Nox. “I was shocked and felt very nervous,” said the student at the Zhengzhou foreign-languages school, in Henan province. “It forced me to change all my plans.”

Applicants from the Chinese mainland usually prepare for one to two years before taking the test, not only because they are gunning for a high score, but also because it is difficult to find a vacant testing center. Each year, thousands of Chinese students flock to examination halls in Hong Kong, Taiwan, Singapore and even Thailand.

“I had booked my flight tickets and even a hotel in Hong Kong because I was planning to take the SAT test there in June,” said Shawn Yin, a Shanghai 11th-grader. “But after the Thursday announcement, I had to rush to move my examination date to May, but all the test centers in Hong Kong, Macau, Taiwan and Japan were full. So I had to switch to Singapore. It’s a waste of thousands of dollars.”

The change affects all international applicants, but the impact is particularly felt by those on the Chinese mainland. Many Chinese students also take multiple Advance Placement (AP) tests, which allow them to get college credits and complete their undergraduate program faster, saving thousands of dollars. They also take several SAT subject tests that increase their chances of getting into a prestigious U.S. university. Any abrupt changes in testing dates can derail their packed schedules.

“I have already registered to take 4 AP tests in May, in calculus, physics, micro- and macroeconomics,” Nox said. “And I will take three SAT subject tests in math, physics and American history in August. I will have to cram the SAT test into May because the next one in October is too late.”

“June is the ‘high season’ for taking the SATs for Chinese students,” said Hongyang Xiao, a partner at AcadMe, a Beijing-based education consultancy that offers courses in the humanities to high school students. “Many Chinese applicants take the SAT exam at least twice, the first time in January as a practice and then in June so that they will have the results in time to apply for an early admission decision.”

Testing services that offer the SAT — the Test of English as a Foreign Language (TOEFL) and the GRE for U.S. graduate school entrance — have been hit by a series of cheating scandals in recent years, in Asia and elsewhere.

In 2015, federal prosecutors in Pittsburgh, Pennsylvania, took 15 Chinese nationals to court over a scheme that had students hiring impostors to take the SAT and other college entrance tests in that U.S. state since 2011. Some Chinese students paid up to $6,000 to professional test takers, the case revealed. All but two of the defendants, who were living in China at the time, pleaded guilty.

“There are two problems with the College Board: They don’t have adequate security at test centers to prevent people from stealing paper-based tests, and some of the test prep companies in China and South Korea have been able to buy the actual test questions before the exam date, according to what I have seen and heard in the industry. This leads to suspicions that there is some form of an information leak,” Hongyang said.

The widespread problem of test stealing stems from the fact that the College Board reuses past SAT questions. “Most test prep companies in China and many other places collect past exam papers and train students to answer them,” Hongyang said. “Only a few mock tests are publicly available. So some test prep companies send an agent to steal actual test papers from testing centers.”

It is not difficult to find sellers touting “kao qian mi juan,” or “secret answer sheets,” before the actual exam on Baidu forums or on e-commerce sites like Taobao. One student wrote on Zhihu, a popular question-and-answer website, that days before the January SAT exam, she received an unsolicited phone call from a seller claiming to have the actual leaked test.

“The security procedure at most testing centers isn’t very strict,” Hongyang said. For example, the testing center in Hong Kong, popular among most mainland Chinese students, seats about 20,000 test-takers in one sitting, making it impossible to catch thieves.

Because of the practice of recycling test questions, “some companies fly their agents to the U.S. to take tests there and some can even memorize the entire exam,” said Huini Gu, founder of Shanghai-based college consultancy Zoomin Academy.

This year, the January exam given in Asia had been originally administered in June in the United States, Reuters reported. A quick search on Chinese search engine Baidu pulls up hundreds of pages of scans and photographs of the June exam questions and answers. Some of the material was posted before the January exam date.

“Several students at my testing center said they had already practiced answering the January SAT questions in a mock exam given by their test prep trainer,” Nox said. “They were really happy, but I hadn’t seen those questions before, and I think it’s really unfair.”

Despite this leak, the College Board released test scores for the January exams on Feb. 23, the same day it announced the new test security measures.

However, the test administrator canceled college entrance exams in 45 testing centers, including those in Hong Kong and Macau, in January 2016 after discovering that some students may have obtained copies of the tests.

College Board CEO David Coleman said in September that the organization planned to scale back its reuse of tests.

Another issue with the SAT exam is that the College Board doesn’t have a way to identify individual cheaters. Therefore, when an irregularity is spotted, they cancel the scores of all the test takers who sat for an exam at the center concerned. According to details available on the test administrator’s website, SAT security measures begin long before exam day. It includes the secure printing and shipping of test materials to the nearly 7,000 SAT test centers in over 170 countries and training test center supervisors to turn away students with questionable IDs. SAT’s top cops rely on complaints of dishonest student behavior at a testing center by students, parents or officials for follow-up investigations.

“But the College Board collects very little information about individual applicants,” said Hongyang. “This makes it difficult for them to zero in on the real cheaters.”

Several students complained of having their scores delayed or canceled due to alleged incidents of cheating at their test centers by a few applicants.

“I flew to the United Sates in 2013 to take the SAT exam, to avoid the risk of having my scores canceled, but in the end, the scores of the entire test center were annulled. I saw two or three students exchanging some notes, but everyone else was just focusing on the exam” said one student from Shanghai, who wished to remain anonymous. “It was a waste of thousands of dollars.”

The College Board does not publish figures on how many test takers take the SAT in each country. According to figures from China’s Ministry of Education, more than 500,000 Chinese students headed overseas for an education in 2015, and the U.S. remains a top destination.