By Liu Wei and Yang Ge 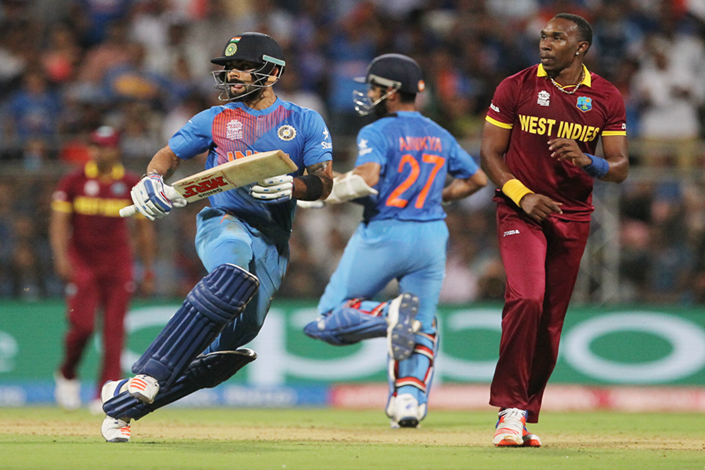 OPPO's logo is seen during the 2016 ICC World Twenty20 cricket semifinals in Mumbai. The Chinese smartphone maker signed a 5-year cricket sponsorship deal worth a reported $160 million to promote the brand in India. Photo: IC

The five-year deal will see Oppo’s name appear on all jerseys for the Indian team over the next five years, an industry source told Caixin. The winning price was reported by local Indian media. The source added that Chinese rival Vivo Technology Communication Co. Ltd. also took part in the bidding, but lost with a lower offer that Indian media said was worth about $115 million.

Oppo, Vivo and other major Chinese brands like Lenovo Group Ltd., Huawei Technologies Co. Ltd. and Xiaomi Inc. have all flocked to India over the last two years, aiming to sell their lower-end smartphones to the country’s rapidly growing consumer class that now boasts more than 600 million mobile subscribers. Less than half of those have smartphones, providing a major sales opportunity for such lower-end models.

As the competition heats up, many of the Chinese brands are looking to differentiate themselves through sponsorship deals with sports clubs and local celebrities. Vivo previously signed a sponsorship deal for the 2016-2017 season of the Indian Premier League, one of the nation’s top leagues for a sport considered by many as India’s national pastime. An estimated 85% of people surveyed followed the sport via TV or other media, according to market research firm YouGov.

Chinese companies took four of the top five spots in India’s smartphone market in last year’s fourth quarter, banking on their niche as makers of low-cost smartphones that can often cost as little as $100 or less. Global giant Samsung Electronics Co. Ltd. led the pack with a 25% share, followed by Xiaomi, Lenovo, Oppo and Vivo, which rounded out the top five with market shares ranging from 7% to 11%, according to data tracking firm IDC.

The Chinese companies migrated to India after fighting a fierce battle for supremacy in China, the world’s largest smartphone market. In last year’s fourth quarter Oppo topped the China market with an 18% share, followed by Huawei, Vivo, Apple Inc. and Xiaomi, with shares of 7% to 17%.

As the competition heats up in India, the Chinese players are also trying to lower costs by localizing production. In December Oppo announced plans to build a 1.5 billion yuan ($22 million) production facility in the country. Xiaomi, Huawei and Vivo have all also announced plans for different forms of localized production.