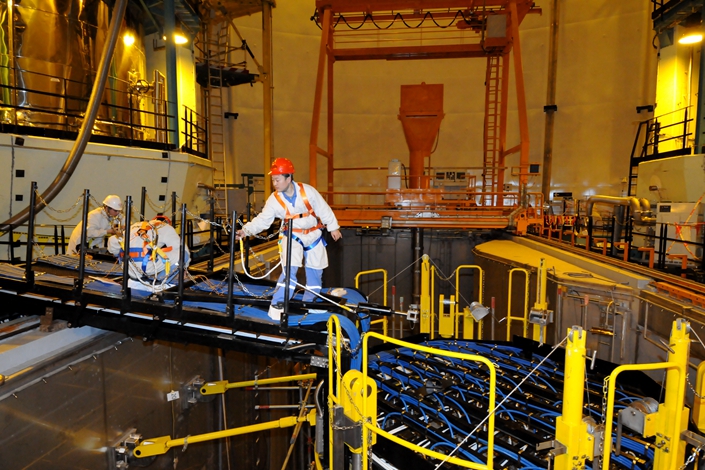 China National Nuclear Corp. (CNNC) and China Nuclear Engineering & Construction Corp. (CNEC) are working on “strategic recombination plans,” which then need to be approved by the central government. Two listed companies owned by CNNC and another listed by CNEC announced the planned merger over the weekend.

The consolidation will be among the two groups, which will not affect the assets and the trading of the three listed companies, a spokesperson of Shanghai-listed China Nuclear Engineering Corp. Ltd., a subsidiary of CNEC, told Caixin.

Once approved, as expected, it will be another major merger between state-owned enterprises. The merger would follow the landmark naissances of train maker CRRC Corp. Ltd. in 2015, formed by CSR and CNR, and steel giant China Baowu Steel Group in 2016, formerly separately operating as Baosteel Group and Wuhan Iron and Steel Group.

Mergers have taken place in other sectors, including tourism and construction materials. In 2016, five pairs of SOEs started the process. The wave of mergers aims to improve efficiency and boost chances of the merged companies expanding successfully overseas.

Most of the earlier consolidations were among rivals. In contrast, CNNC and CNEC have little overlap in business: CNNC specializes in nuclear power generation and new-energy sources, while CNEC provides construction services for nuclear and national defense projects.

Rumors about the deal have circulated for some time, especially after former CNEC Chairman Wang Shoujun became the chairman of CNNC in December.

The two companies were siblings of an old China National Nuclear Corp., which spun off the construction department to form CNEC in 1999, and reorganized with some administrative bodies to evolve into the new CNNC at the same time.

Wang said at a news conference earlier this month that Chinese nuclear companies should unite if they are to export technology, implying the consolidation.

China currently operates 37 nuclear reactors, which supply 3% of the country’s total power use, and is cooperating with other countries in projects overseas. For example, the Hinkley Point C nuclear power station in southwest England is being built by a Sino-French consortium led by China General Nuclear Power Group and French energy group EDF.

Following the nuclear merger, another much-awaited one — between China State Shipbuilding Corp. and China Shipbuilding Industry Corp. — can be expected, as the two firms have different business focuses and were originated from the same company, just like CNNC and CNEC, said Si Jingzhe, analyst with Sinolink Securities.