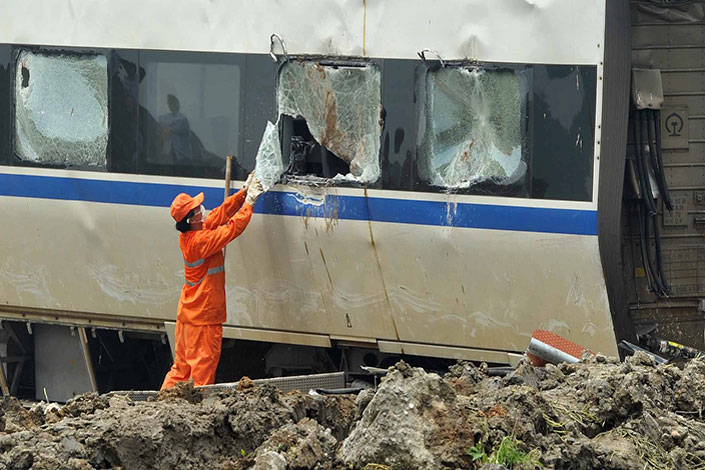 A worker removes a broken window after a train accident in Wenzhou, Zhejiang province, on July 26, 2011. The number of people killed in railway accidents has been declining in the past six years. Photo: Visual China

(Beijing) — The number of railway-related deaths in China continues to fall, slipping below 1,000 in 2016, but secrecy about accidents and agency in-fighting remain.

The National Railway Administration (NRA) said in its report that 932 people died in railway accidents in China last year. That was the lowest annual death toll since China began keeping public records in 2011, when 1,566 people died in rail accidents. It was also a 10% decline from 2015, when 1,037 deaths were recorded.


The rail administration said there were three major accidents in 2016. Two were caused by illegal trespassing or crossing on tracks and by substandard equipment. The other was due to poor management on a work site.

However, detailed information and investigation results for two of the accidents have been shrouded in secrecy. Caixin telephoned the rail administration for comment but received no reply.

In one accident, six maintenance workers were hit by a train and killed in central Henan province due to poor management of the Zhengzhou Railway Bureau. Caixin first reported on the accident in December, after which the government revealed the results of its investigation.

The administrative and commercial functions of China's railway network are split into two agencies, the NRA and the China Railway Corp (CRC), respectively.

The CRC vowed to reduce train accidents and related deaths last year in response to growing pressure from the railway regulator, sources said.

Last May, the rail regulator NRA required all companies in the rail industry to file reports about accidents that caused three or more deaths. Within 20 working days of the reports being filed, companies must now disclose investigation results, any punishment, and how the situation leading to the accident could have been prevented.

But the CRC opposed the disclosure rules, arguing that revealing the number of people who die in mishaps every year would invite too much public scrutiny, Caixin reported last March, citing sources with knowledge of the situation.

Last year, 2.8 billion people traveled by rail in China, about half of whom were on high-speed rail. Meanwhile, freight trains transported 3.3 billion metric tons of cargo.