By Coco Feng and An Limin 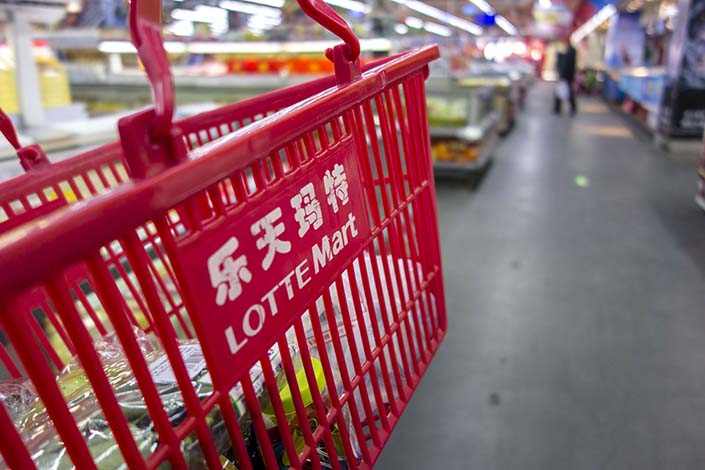 A customer carries a shopping basket in a Lotte Mart in Beijing on March 2. Seventy-five of Lotte Mart's 99 China stores have been closed since the South Korean retailing giant agreed to provide Seoul with a golf course to use as the site of an anti-missile system. Photo: Visual China

South Korean retail giant Lotte Group was the first and hardest-hit by the diplomatic tensions after it agreed last month to allow a golf course it owned to be the site of the missile system. Of the 99 China-based Lotte Marts, 75 have now closed, company spokesperson Han Bo Young told Caixin.

The U.S. and South Korea say the system — the Terminal High Altitude Area Defense, or THAAD — is designed to intercept and destroy missiles that would be fired by North Korea. But China has voiced concern that THAAD’s powerful radar could be used for spying.

Lotte’s China website has been down for over a month, and it has seen its stores disappear from China’s top two online marketplaces — Alibaba Group Holding Ltd.’s Tmall, and JD.com.

Hwang Kag-gyu, head of the company’s Corporate Innovation Office, said during a news conference on Monday that China has been Lotte’s largest overseas market in recent years, and the group will continue to invest in its China business.

Other industries also have felt adverse effects from the diplomatic spat. South Korean automakers Hyundai Motor Co. and Kia Motors Corp. sold half the numbers of cars in China last month than they did in the same period last year, Reuters reported.

In the wake of the disappointing sales numbers, Hyundai reportedly suspended output at its factory in Hebei province, while Kia was said to have cut its China-based vehicle production. However, Hyundai’s joint venture in Beijing denied the suspension of the Hebei plant. Kia’s joint venture in China had no comment on the purported production cuts.

A decline in tourism has affected businesses in both countries. Travel packages to South Korea, including tickets for tourist attractions, were removed without explanation from major Chinese travel websites such as Ctrip, Qunar, Alibaba’s Fliggy, and Tuniu.

China is a significant source of tourism to South Korea, accounting for 47% of total visitors last year, according to the Korea Tourism Organization.

“Though netizens are praising their moves, the tourism industry is shouldering the consequences of continuing losses,” said Zhang Mingyang, a senior editor of CTCNN.com, a tourism industry information provider.

Wanzhong online sales manager Guo Jinming told Caixin that Wanzhong has given over 3,000 refunds of at least 2,000 yuan ($290) each since early March.

South Korea was one of the largest source of business for the company, which has shifted its focus more to North Korea and Southeast Asia, Guo said, adding that the company will restart service to South Korea after the THAAD controversy is over.

The impact has spread to other sectors. Chinese budget flight operator Spring Airlines reported a 28% decline in net profit in 2016, down for the first time since it was listed three years ago.

“China-Korea routes have been the most profitable lines of the company,” Spring Airlines said in its annual report. “However, both prices and reservations have started to decrease since October, after South Korea decided to deploy THAAD, which influenced tourism.”

The company will continue reducing capacity on South Korea lines in the near future, its annual report said.