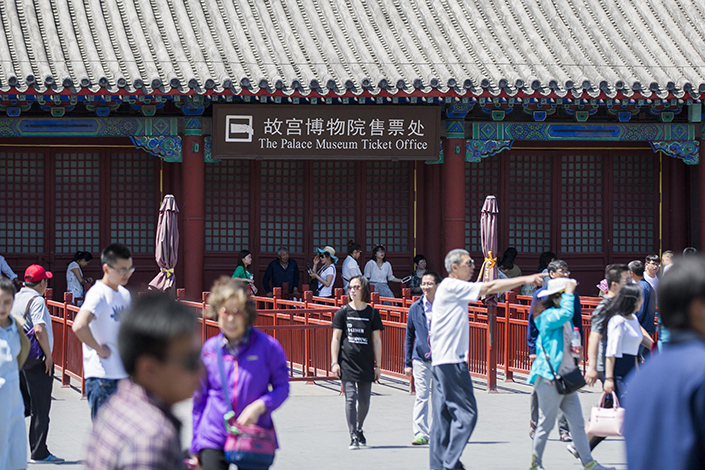 The Forbidden City, one of China's top tourist attractions, will have tickets available only online from July through October under a pilot program. Ticket-purchase assistance will be available on-site for visitors who aren't tech-savvy. Photo: Visual China

(Beijing) — One of China’s best-known landmarks is bringing new meaning to its name, with word that the Forbidden City in Beijing is preparing a trial program that will close its doors to low-techies.

The home to emperors during the Ming and Qing dynasties from the 15th to early 20th centuries — now one of China’s most popular tourist attractions — will officially test an online-only sales model for its tickets starting in July, according to Chinese media reports, citing the attraction’s director, Shan Jixiang.

Spokesmen for the massive tourist attraction fronted by Tiananmen Square and sometimes also known as the Palace Museum were not available for comment.

The trial program, which will run through October, will see the closing of all windows that sell tickets for 60 yuan ($8.70) during peak season and 40 yuan during off-peak months. About half of all tickets are now sold over the web, while the figure can rise to as high as 70% during holidays.

For those who don’t know about the policy or aren’t web-savvy enough to order online, attendants at onsite information booths can help people buy tickets on the spot. But such last-minute buyers could be out of luck if the 80,000 tickets available each day are sold out, since all of each day’s allotment will be available on a first-come, first-served basis.

In addition to online ordering, the Forbidden City’s operator is also exploring creation of a ticket-ordering app, which would eventually incorporate payments via popular services such as Alipay and WeChat’s payment function. An English-language version is also in the works to accommodate foreign visitors.

Officials at the tourist attraction said one of the policy’s main goals is to maintain a more-stable visitor flow to prevent overcrowding during peak times of day, when lots of visitors tend to show up, and lower-volume times, when fewer people come. Since rolling out its daily limit, the Forbidden City has had to turn away visitors on 90 separate days since 2015 after reaching its capacity.

Reaction to the trial program was generally supportive among internet users, though some worried the policy could discriminate against foreign and older visitors who still prefer to buy things and order tickets using traditional brick-and-mortar channels.

“Yes! I give it 32 ‘likes’” said one internet user named mangc6d1984 on the news site operated by the popular NetEase portal.

Others said the policy was almost certain to be exploited by scalpers, known as “yellow cows” in Chinese, who find their way into nearly any type of business that requires a ticket.

“This is a good trend, but will they be able to control the scalpers?” commented another user. “How about a system that requires use of people’s real names?”

The Forbidden City isn’t the only famous tourist attraction experimenting with new high-tech concepts. Earlier this year, the nation’s tourism administration announced an ambitious plan that calls for free Wi-Fi and other high-tech bells and whistles in all of the nation’s top tourist attractions, including the Great Wall and Forbidden City, by 2020.