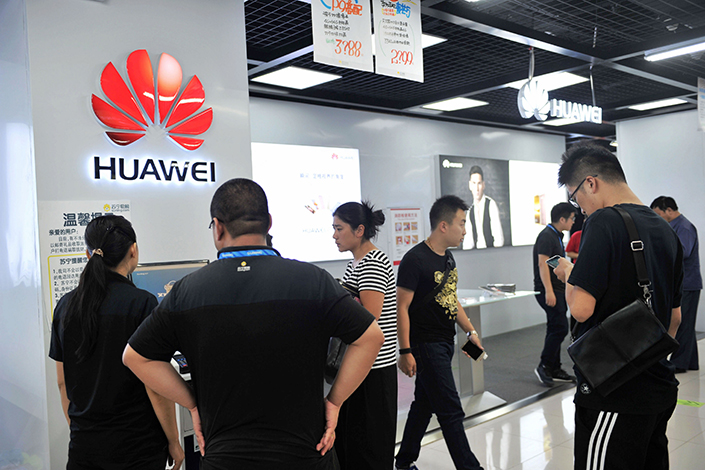 Customers visit a Huawei counter at a home appliance store in Qingdao. The telecoms giant is launching a second generation of portable PCs. Photo: IC

(Beijing) — After making a tiny splash into computers last year, telecoms giant Huawei Technologies Co. Ltd. is taking another shot at the lucrative but competitive market with a second generation of portable PCs, the company announced.

Having rocketed to global stardom on the success of its smartphones, Huawei is now trying to replicate that performance in the computing space, focusing on portable products that are considered the wave of the future as traditional desktop PC sales decline.

A year after rolling out its first laptop model, which included a detachable screen, Huawei announced a second generation of three new models, one with a detachable screen and two more conventional ones, according to a company announcement on Tuesday.

It said the new models from its laptop series, called MateBooks, will start shipping this summer, and are aimed at the middle- to higher-end of the market, consistent with the company’s movements in the smartphone sector. The cheapest of the three models, the MateBook D, will start at 799 euros ($893), while the highest, the MateBook X, will start at 1,399 euros and sell for as much as 1,699 euros.

Huawei’s first MateBook model got relatively positive reviews, but sold just 400,000 units last year, accounting for a tiny 2% of the market for notebook computers with detachable screens, according to data tracking firm IDC. The detachable market is expected to grow 30% this year, but is still just one-ninth the size of the market for traditional laptop models, said IDC analyst Bryan Ma.

Ma said Huawei, now the world’s third largest smartphone maker, could face some headwinds in the computer market due to its lack of presence among corporate buyers, whose demand is likely to grow more strongly than mass consumers. By comparison, brands like Lenovo, Dell and HP have much better connections with corporate customers, he added.

“Still, reviewers have been favorable to the industrial design (of Huawei’s computers), comparing it to (Apple’s) MacBook Air. This could bode well for Huawei in China, where ultra-slim MacBook Air-like products have garnered increasing consumer interest lately.”