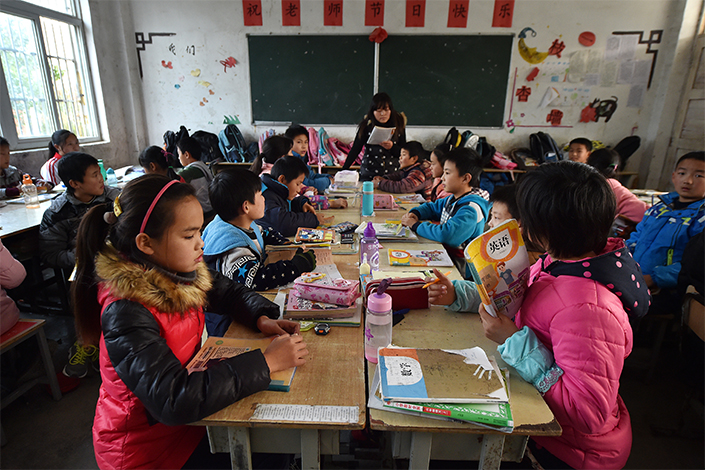 The Ministry of Education wants teachers to be paid at least as much as civil servants. Photo: Visual China

(Beijing) – County governments in China must make sure teachers are paid at least as much as civil servants—or else be held accountable.

Low pay has led to a shortage in trained teachers, especially in remote and impoverished regions.

The Ministry of Education said it wants to increase equality in schooling for rural students. A new document, released earlier this week, contains new criteria designed to improve the quality of teaching at primary and middle schools in rural areas.

Schools are required to have at least one "backbone" teacher – a highly qualified educator – for each 100 students and at least nine teachers in physical education, music and fine arts for every 1,000 students. And teachers must be paid at least that of civil servants in the same area.

Failure to meet these targets can result in a warning for county officials in charge of education, or even demotions, the ministry said.

County governments in China are tasked with distributing funds for public schools in rural areas. But rural teachers have been falling behind government employees in benefits despite repeated pledges from the central government to address the problem.

The pay gap between primary and middle school teachers versus civil servants has widened since 1990. The gap peaked at 6,851 yuan a year on average before it dropped to 2,774 yuan in 2010, according to a study published by Jiang Jinqiu at Capital University of Economics and Business in Beijing.

The gap could in fact be larger because government employees have better perks, including substantial housing allowances.

That has led to a brain drain of rural teachers. The drain is especially acute at schools in remote areas in some impoverished regions. The number of rural teachers dropped by over 30% to 3.3 million from 2010 to 2013, official statistics show.

A shortfall has led to the closure of thousands of small rural schools and a growing number of “super-size” classes at township and county schools, at the expense of teacher quality and students' well-being.

More than 45% of classes in schools in the central provinces of Henan and Hunan and the southern region of Guangxi are overcrowded, according to Wu.

Some classes in rural schools in Henan have had as many as 160 students, according to Yang Dongping, director of the 21st Century Education Research Institute.

Overcrowding at Chinese schools has been blamed for tragedies like the stampede at Puyang County No. 3 Experimental School in central Henan province late in March, which killed one and injured another 22.

The school said on its website that it had 1,704 students in 24 classes — or 71 students in each class on average.