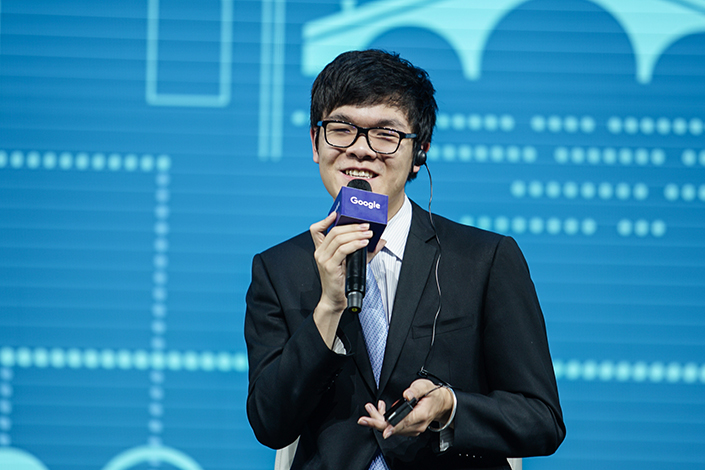 Chinese Go player Ke Jie speaks after being defeated by Google's artificial intelligence (AI) program, AlphaGo, in the second game of the Google DeepMind Challenge Match during the Future of Go Summit in Wuzhen, Jiaxing, in east China's Zhejiang province, on May 25. Photo: IC

(Beijing) — A lofty man-versus-machine debate gave way to more earthly matters of nationalism and cultural pride on Friday, as controversy erupted over a Chinese reporter’s use of English to question a master compatriot who had just fallen to a computer at the ancient game of Go.

The controversy began shortly after 19-year-old Ke Jie, the world’s reigning Go champion, lost his second straight game to a Google-backed artificial intelligence computer named AlphaGo, meaning there was no way Ke could come back to win the three-game match.

The series was widely followed by many Chinese, not only for its man-versus-machine theme but also its local overtones. Go was invented in China more than 2,500 years ago, making it the world’s oldest continuously played board game. Chinese are also proud of their nation’s history as one of the world’s oldest civilizations, and Ke’s position as global defender of the game followed several decades where Go champions came mostly from South Korea and Japan.

So when a Chinese reporter from CGTN, China’s main English-language state news channel, asked a rapid-fire series of questions in English in a post-match session, many were caught off guard. Those included the on-site translator, who was overwhelmed by the reporter’s quick speech and firing off of several questions without waiting for a translation between each statement, which is sometime customary.

The exchange prompted CGTN to issue an apology, a rarity from China’s official broadcaster often considered to represent the views of the government and Communist Party. The apology, posted in an official microblog post on Weibo, the Chinese equivalent of Twitter, led off with the word liangjie, or roughly “please forgive us”, written out three times at the top.

A message follows from the reporter, first in Chinese then in English, explaining that CGTN’s reporters often pose questions in English because of the station’s own use of English as its official language.

“English is the working language of CGTN’s digital department, where I am an editor,” the reporter wrote. “Therefore, I addressed the question in English, knowing that an interpreter was available. Mr. Ke responded that as a Chinese journalist, I should ask questions in Chinese. I fully understand and respect his point of view.”

The unusual apology drew thousands of reader comments, though most focused on minor points like how Ke or the translator could have reacted better or issues of what language is most appropriate in which situations, conveying the feeling that this was much ado about very little. Some noted that Ke was probably feeling emotional after the big loss, and made his remarks in the heat of the moment.

“In fact, the reporter didn’t do anything wrong, it’s normal to be emotional,” wrote one user called Xiaochendelieshou. “Perhaps Ke Jie was also emotional, and this created the clash between him and the reporter. We should thank the reporter for being courteous. This incident tells us you should be polite, you should be tolerant.”