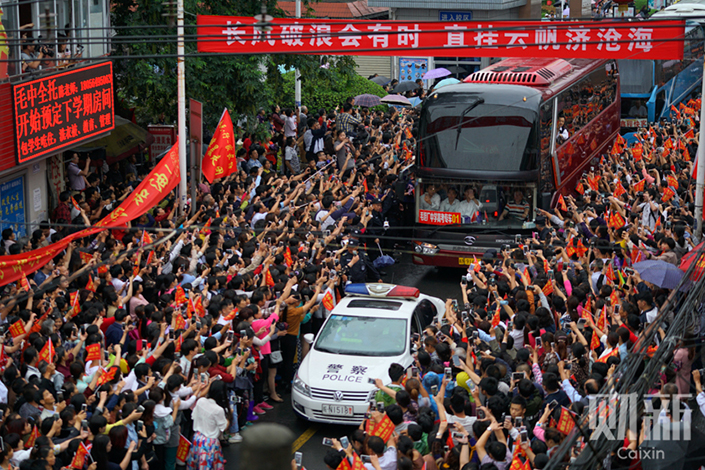 (Beijing) – Humans worried about being replaced by machines needn’t fret too much just yet, at least not if they’re among the thousands of anxious teenagers set to take China’s national college entrance exam, known as the “gaokao,” over the next two days.

In what’s being billed as a first in China’s nearly 1,500-year-old exam-taking history, a robot powered by artificial intelligence, or AI, will sit the math portion of the test at a special session attended by scientists and reporters in Chengdu, capital of interior China’s Sichuan province. The event spotlights the country’s recent obsession with all things high-tech, as it seeks to move up the value chain away from its traditional strength in low-tech manufacturing.

AI-MATHS’ gaokao debut follows a more high-profile challenge last month for a Google-backed computer named AlphaGo, which showed off its prowess by shutting out defending world champion Ke Jie at the ancient game of Go in a three-game match.

Millions of Chinese followed that contest, which contained big local overtones due to the game’s invention in China more than 2,500 years ago and also Ke’s own status as a Chinese master.

Like AlphaGo and many annual test-takers, AI-MATHS prepared by poring over hundreds of practice exams with about 12,000 individual questions, according to the Chengdu Evening News, which detailed the upcoming challenge.

“Now AI is back, this time to take the math-only portion of the gaokao, China’s hyper-competitive college entrance exam,” said Brock Silvers, managing director of consultancy Kaiyuan Capital. “Will more Chinese champions fall to another computer? Let the battle continue! Either way, expect reactions of both pride and disappointment.”

Despite being labeled as a “robot,” AI-MATHS is really just an assembly of more than 10 computer servers that will occupy a table in a meeting room of Chengdu’s Tianfu Xingu Building No. 10, according to the news report. By comparison, most Chinese high-school students sitting the exam will take their places in desk-lined rooms within tightly guarded testing centers, usually in schools. AI-MATHS’ computers will go to work around 5 p.m. on Wednesday, after human test-takers have completed their session for the day, the newspaper said.

The robot’s designers, who come from the prestigious Tsinghua University, haven’t set the bar too high for AI-MATHS. The designers wouldn’t comment on their goals shortly before the test, perhaps feeling the pressure that many Chinese do before an exam that could determine the rest of their lives.

But in an interview last month when they announced their plan, the team said the robot had recently scored 93 on a practice test, and that a score of 110 would be their goal for the upcoming challenge. That compares with a top possible score of 150 for most Chinese provinces, and champions who usually score above 145 and occasionally finish at the perfect level.

The gaokao is a huge event in China, tracing its roots as far back as the Sui and Tang dynasties nearly 1,500 years ago. The earliest exams, often called Imperial Examinations, would usually see well-to-do Chinese study the classics for years to prepare for a series of tests that were the main gateway into officialdom. Today’s tests follow a similar format based on a modern curriculum, with two main categories in humanities and sciences.

Gaokao stories typically flood the media in days leading up to the test, including the latest measures being taken to prevent cheating, both high-tech and low-tech, and steps being taken to make sure students can get to exam centers on time. In a bid to relieve some of the pressure, many universities have begun administering their own admission processes outside the gaokao in recent years, accepting a mix of students selected from the national test and their own systems.