Opinion: Relax, Humans: Robots Here to Enhance, not Replace, Us 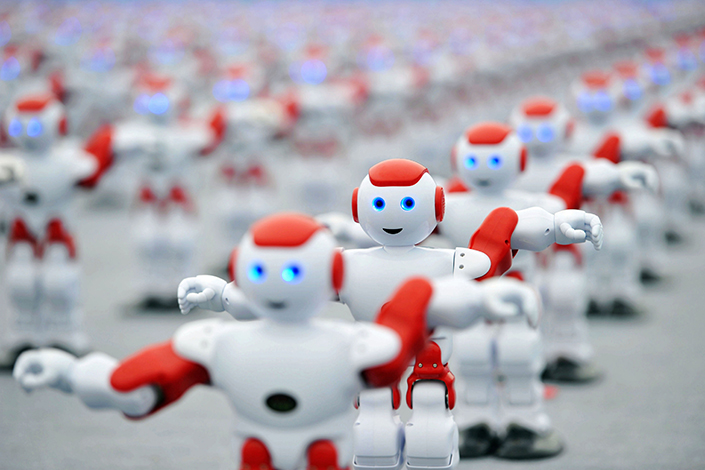 Many fear that the growing popularity of robots and artificial intelligence will lead to unmanageable job losses. Above, 1,050 the One thousand fifty robots dance simultaneously at the 26th Qingdao International Beer Festival in Qingdao, Shandong province, on July 30, 2016. Photo: Visual China

The English-language press is full of information these days about robots and advances in artificial intelligence (AI) that will make robots ever better, perhaps even excelling human beings at many heretofore human tasks. Indeed, alarm is being spread about the future loss of jobs that these developments — and other technological marvels — will entail as one by one, they replace human beings in their physical and intellectually routine tasks, often with greater safety and reliability.

To those with a historical inclination, these arguments should sound familiar. Qualitatively, they have been going on for over 200 years, as primitive spinning and weaving machines gradually replaced hand-spinning and hand-weaving of cloth. Sure enough, many hand-weavers eventually lost their activities, replaced by machines. But it took time, and in the meantime, other industries expanded — in the metals and machine-making industries directly involved in making the machines; but also in other activities made possibly by the higher productivity in cloth-making, including, of course, growth in demand for the now-cheaper cloth.

So this currently fascinating but alarming warning of the future robotization of society simply is an old story repeated at periodic intervals over the decades — “automation” was the phrase a generation ago — in superficially new clothing.

Maybe, maybe not. There is no rule that history must repeat itself in different guises. Maybe current alarms reflect a new phenomenon. We often are told that technical change is “accelerating” and is approaching a speed that challenges the abilities of modern society to adapt to it. Although the word is used frequently, is there actually any evidence of “accelerating change” — meaning that change is proceeding at an ever-more rapid speed, rather than continuing at the steady pace of the past few decades, or even century?

One possible indicator would be productivity growth in the United States and other leading economies. Sadly, while this seems to have risen for several years about 20 years ago, it has since then declined to the level of the 1970s and 1980s, or even below that. Of course, these economies had a large recession in 2008-09 with only a slow recovery. But a recovery has occurred, with U.S. unemployment back to the level of 2006, yet there is no sign yet of a recovery in productivity growth to the level of the late 1990s, much less above it. That is, on this overall aggregate indicator, there is no sign of an acceleration of technical change; on the contrary.

To be sure, our measures of overall productivity have been increasingly questioned, particularly as employment shifts from production of goods (agriculture and manufacturing), where we are relatively confident of our measurements, to the production of services — now accounting for 85% of American employment — where output is much harder to measure, and indeed where (as in education) we measure output by inputs, implicitly assuming growth in productivity is zero. As the employment shift from goods to services continues, an aggregate measure of productivity growth might therefore be expected to decline. But this shift has been occurring for decades, so for an “acceleration” to have occurred, we would need an increase in this measurement error, which so far economists have been unable to find.

Another, less-comprehensive approach would be to measure the declines in occupational employment that have occurred over recent decades to get an indicator of whether particular categories of jobs have been destroyed at an increasing rate. Of course, this depends on how exactly jobs have been classified. But on the BLS classifications, this answer again seems to be negative. Maximum 10-year declines in employment by occupational category were 71% in 1950-60, 42% in 1960-80, 51% in 1980-90, 59% in 1900-2000, and 35% in 2000-2015 (different job categories in each period). Variation yes, but no obvious indication of acceleration here.

Robots and ever-better robots are coming — indeed, are already coming, including to China. In 2016, an estimated 90,000 robots were installed in China, roughly one-third of the world total, although China lags far behind the countries with the largest number of robots per 1,000 employees. South Korea leads, followed by Singapore, Japan, and Germany in that order — all rapidly aging societies. But if the recent past is any guide, they will take a long time to replace labor even in jobs where replacement by robots is technically possible. And the enhancements to productivity will either lower prices and/or raise incomes for someone (owners of the robots, or the firms that make them). The enlarged real incomes — and the increased leisure that robots will enable — will lead to expansion in other industries, possibly remote from where the robots are used. Americans, and probably others as well, seem to have a potentially insatiable demand for new gadgets and for new experiences.