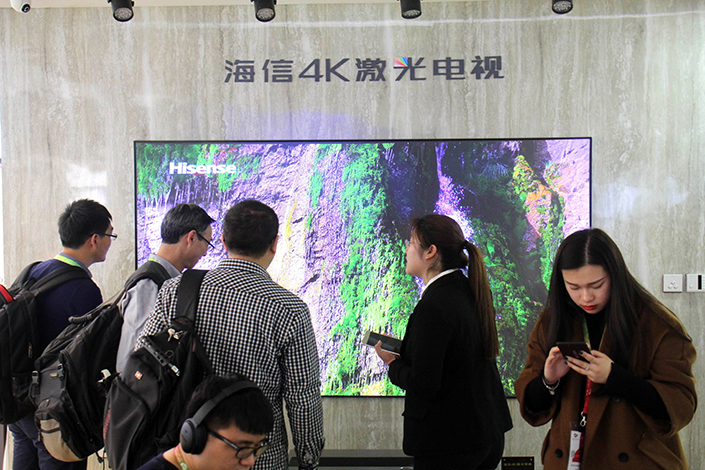 Sharp Corp. is seeking to pullout of a trademark contract in the U.S. with Chinese TV maker Hisense Co. Ltd. . Above, a Hisense laser television is displayed at the Appliance & Electronics World Expo in Shanghai on March 9. Photo: Visual China

(Beijing) — Sharp Corp. is seeking to pull the plug on a trademark contract in the U.S. with Chinese TV maker Hisense Co. Ltd. for allegedly “cutting corners on quality,” as the Japanese electronics-maker filed a court action against Hisense for devaluing its name.

The leading LCD TV-maker is reneging on a 5-year branding license for its TV business, an agreement signed before the arrival of a new owner, Taiwanese manufacturer Foxconn Technology Group. Foxconn is now actively looking to leverage the Sharp brand to boost worldwide growth in its consumer electronics.

The Japanese firm has accused Hisense of selling “shoddily manufactured, deceptively advertised” televisions in North and South America under the Sharp name, which it says has tarnished Sharp’s reputation and led to an overall perception of the brand as being “cheap,” the company said in a complaint filed last Friday with the San Francisco Superior Court.

Hisense told Caixin that Sharp’s decision to terminate their agreement was led by Hon Hai Precison Industry Co., also known as Foxconn, which took a 66% controlling stake in Sharp in August.

Originally established as a state-owned enterprise and headquartered in Shandong province, Hisense acquired the rights to manufacture and sell using the Sharp brand for five years beginning in 2015. The rights came with the $23.7 million purchase of its television factory in Mexico.

Hisense said it has continued to make and sell TVs under the Sharp brand in North America in accordance with the original contract, and is prepared to defend its position in court.

Sharp is an important asset for Hon Hai, which expects to help the company make a comeback, as it looks to cut overheads and improve its management structure.

An aggressive campaign to revive one of the longest-standing Japanese tech brands is already underway, and Sharp has increased its global TV production target for the year to 14 million from 10 million sets.

This new target, along with a shift to a more proactive market strategy, was announced last week during its first product launch since Hon Hai’s takeover.