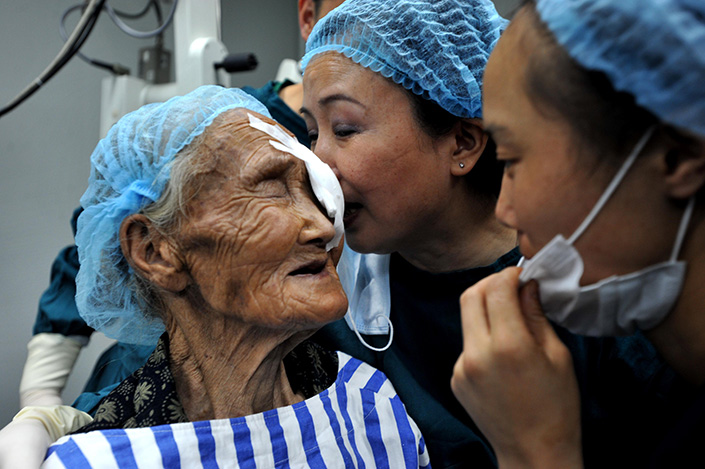 A 109-year-old woman celebrates her successful cataract surgery with nurses, in an Aier eye hospital in Guiyang, Guizhou province, on July 15, 2011. Photo: IC

(Beijing) — Chinese eye-clinic giant Aier Eye Hospital Group has made an unprecedented move to open a branch in the United States. But the largest challenge ahead is possible resistance from Americans to a Chinese brand, an Aier executive told Caixin.

“The company plans to open eye clinics all across the U.S., employing thousands over the next five years,” said Dr. Ming Wang, CEO of Aier U.S., whose clinic in Nashville, Tennessee, was acquired by the group in January and became Aier’s first presence in the country.

Aier, which now has more than 170 branches in its home country, has accelerated its pace of expanding overseas this year. In addition to the U.S., it now has more than 70 locations in four European countries after purchasing European peer Clinica Baviera SA in April.

Caixin interviewed Wang, who is a veteran Chinese-American ophthalmologist who moved to the U.S. in 1982 to study and then begin his career. Wang has been involved in Aier’s China operations for 15 years.

Here are excerpts from the interview:

Caixin: What areas of the U.S. will Aier focus on in the beginning, and how many new clinics are you planning to open in the next few years?

Wang: Aier has had a successful track record in China of starting out itself in the rural areas of China, where the need was the greatest. Aier U.S. may start by looking into the rural area of U.S. We’ll start from Tennessee — Aier’s headquarters in the U.S. — and its neighboring states, and concurrently look for sites in small cities.

The new venture has just been set up this year, and the expansion will start next year. In the next five years, we are thinking of building up to 50 clinics, mainly through mergers and acquisitions. We don’t expect the U.S. operations to be as scalable as in China.

Caixin: What is the largest challenge of Aier’s expansion in the U.S.?

Wang: So far, Americans have mixed feelings about Chinese companies, especially given the large trade deficit the U.S. has with the Asian country. The health care industry develops particularly based on perception, on whether the patients prefer one clinic over another. We’ll start acquiring local clinics in the U.S. and gradually improve Aier’s brand in the country. In the long run, it is both challenging and promising, as both countries have economic interests and Aier provides quality care and job opportunities.

Caixin: How will Aier stand out in a country where the health care industry is much more advanced?

Wang: First of all, Aier has had successful experience building and running the world’s largest eye care group, and we feel that we can tap on that. We do understand that the U.S. and China are very different in many ways, and we need to do things the American way here in the U.S.

Secondly, Aier has excelled in identifying areas of need for eye care and has built itself up by first focusing in rural areas in China where the need for eye care was the greatest. Though the U.S. is much more advanced in eye care, Aier believes that there are still areas in America where access to health care such as eye care is still lacking, and these areas presents great opportunities.

Lastly, as a public company, which was the first hospital in China’s history to seek an IPO, in 2009, Aier has strong financial strength and resources. We are a long-term player and count on organic growth.

Caixin: How is the U.S. market different from China’s, and how will Aier do things the American way?

Wang: The U.S. is a capitalist society, but the health-care segment is more socialist as a larger proportion of the cost is covered by the government and private insurance plans. In this sense, patients, regardless of costs, are in need of better services.

Aier, on the contrary, sees around 30% of its services paid by patients themselves, and the company tends to spend more on marketing and patients are more picky. As Medicare costs are standing high, the U.S. has started to control costs and back off some coverage, and Aier has a lot of experience surviving in such a system. (Editor’s note: Medicare is the U.S. government’s health insurance program for citizens 65 and older and younger citizens with certain disabilities.)

Another difference is that technology in American health care is highly utilized. No country can even come close to the U.S. in terms of technology, research and innovation. Aier will also benefit from launching services in this market.

Caixin: Does Aier plan to expand to places other than the U.S. and Europe?

Wang: So far, Aier’s focus outside China is the two regions. There are also opportunities in other areas, such as India. There is no concrete progress, but many discussions on India have been conducted.

Caixin: Chinese companies have made a great number of acquisitions abroad, and some in the entertainment and real estate sectors have aroused concerns. How is Aier’s investment in the U.S. viewed?

Wang: There have been precedents where deals in other industries were blocked. But Aier’s move is the first such case in the U.S., and so far there is no nervousness aroused, which makes health-care sector attractive to investments.

Caixin: What is your view on traditional Chinese medicine?

Wang: I was educated in the Western system, but the two older generations of my family performed traditional Chinese medical care. I personally appreciate both. The industry in the past half-century has been dominated by Western medicine, which is good at fixing health problems. But now it is also influenced by the philosophy of Chinese medicine with a focus on maintaining health and improving the balance of the whole physical system.