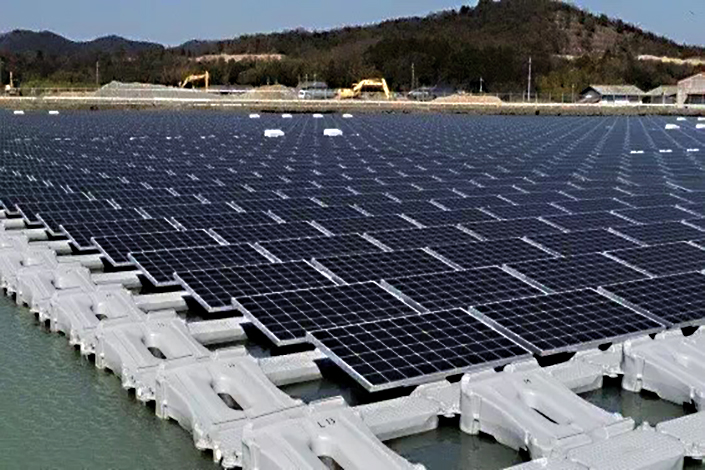 (Beijing) — A solar story with highly symbolic overtones has officially come online in eastern China’s Anhui province with the switching on of an unusual power generation plant floating in an artificial lake in an abandoned coal mine.

While relatively small by industry standards, the 40-megawatt plant near the city of Huainan is still the world’s largest floating solar plant, according to JA Solar Holdings Co. Ltd., which supplied panels for the project. The plant, which officially began operations last month, is capable of supplying most of the needs for power lighting and air conditioning systems in nearby Huainan.

China has actively been promoting the development of new energy sources like solar, wind and hydropower to replace coal, which currently supplies the majority of the nation’s electricity and is a major contributor to the country’s frequently heavy air pollution.

While floating solar panels make a pretty picture in addition to generating clean energy, they will probably remain a niche market for the foreseeable future, analysts said. JA Solar said the type of plant is well-suited to places like islands, where land is generally a more scarce commodity, making the cost of ocean surface a less-expensive alternative.

In the case of the Huainan project, government policy was probably a chief consideration behind the decision to develop on an old coal mine, said Patrick Dai, a solar energy analyst in research house Macquarie’s commodities group. In particular, he said, the project’s developer probably chose the site to capitalize on government incentives to develop such cutting-edge projects in impoverished regions.

“To compete for listing in the (poverty alleviation) program, solar farm developers are trying their best to utilize areas of depression from deserted mines, ponds, roofs of green houses and hills,” he said. “That would be the background of this floating solar farm. Although the scale and return of the solar farms still requires a relatively large area, it could be more interesting to deploy the technology for the poverty relief program in the poor regions where many water bodies exist.”

Dai also said that as the global solar industry heads into a new downturn that has sent many panel-makers into the red, companies like JA Solar will be looking for more-creative projects like the water-based one to pick up new business to offset broader weakening demand. Government incentives will also help to offset the effects of weakening margins due to eroding prices.

“Given serious oversupply and weakening demand from China and the U.S., the manufacturers in the supply chain will face increasing difficulty in terms of margin contraction and price collapse,” he said.

Growing trouble signs have emerged from the Chinese solar sector in recent weeks, as players like Canadian Solar, ReneSola and Yingli Green Energy all reported quarterly losses. The companies are being hurt by weakening demand, as the pipeline of new projects in the U.S., Europe and China starts to slow.