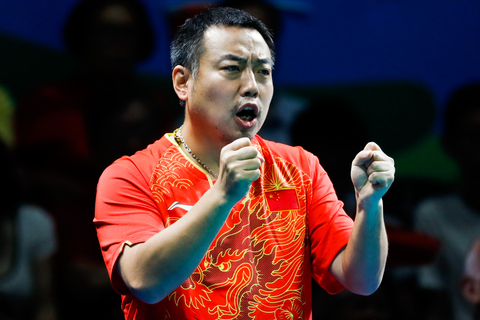 Liu Guoliang is a well-known table tennis player, the first to secure every title at major world tournaments, including the World Championships, World Cup and the Olympic Games. Photo: Visual China

(Beijing) – Three top-ranking Chinese pingpong players quit a world tour to protest the removal of a beloved coach, sending the sport into disarray and angering table tennis authorities both at home and abroad.

Ma Long, Fan Zhendong and Xu Xin, the world’s top three players according to the International Table Tennis Federation (ITTF) ranking, didn’t show up for their round of singles matches at the China Open in the southwestern city of Chengdu on Friday evening and thereby forfeited their matches, the ITTF said.

At 7 p.m. on Friday, all three players, including a fourth member Zhang Jike who quit the game due to injury, posted the same line on their Sina Weibo accounts: “At this moment we don't feel like playing anymore, because we miss you, Liu Guoliang!”

Liu is a world champion and Olympics medalist who was China’s head coach until Tuesday, when the Chinese Table Tennis Association unexpectedly announced he would leave the top coaching position and become the association’s vice chairman, an administrative position already shared by 18 people.

Other Chinese table tennis players and coaches have joined the protest, posting the same line on their Weibo accounts.

However, all the Sina Weibo posts have since disappeared.

China’s General Administration of Sports, which views table tennis as the nation’s top “national ball game,” said on Friday evening that “the act of forfeiting without authorization and leaving without notice during a major international tournament shows a lack of regard for the athlete’s ethical code and the code of conduct, and for the interest and glory of the country, and it is also disrespectful to opponents and spectators.”

“The General Administration of Sports of China has tasked the Chinese Table Tennis Association (CTTA) to investigate the incident and deal with the incident severely,” it said on its official website.

The ITTF said it was “very disappointed” and will work with the CTTA “to investigate this serious matter to work out our course of action.”

Disobedience of professional sports players in China can have serious consequences. Chinese-Japanese table tennis player Koyama Chire, a former world champion, quit the Chinese national team and moved to Japan in the 1980s, after refusing to follow the coach’s orders to throw matches to her teammates.

China’s table tennis team is currently undergoing a shakeup. In May, Kong Linghui, the chief coach of the national women’s team, was relieved from his duties after having been sued by a luxury Singaporean hotel for failing to fully repay a S$1 million ($721,300) credit line taken out from the hotel’s casino operator two years ago.

Kong is an old friend of head coach Liu, and former teammates from the same era. It is not known if Liu’s sudden change of position relates in any way to Kong’s removal.

Spectators chanted Liu’s name throughout matches at the China Open on Friday evening.