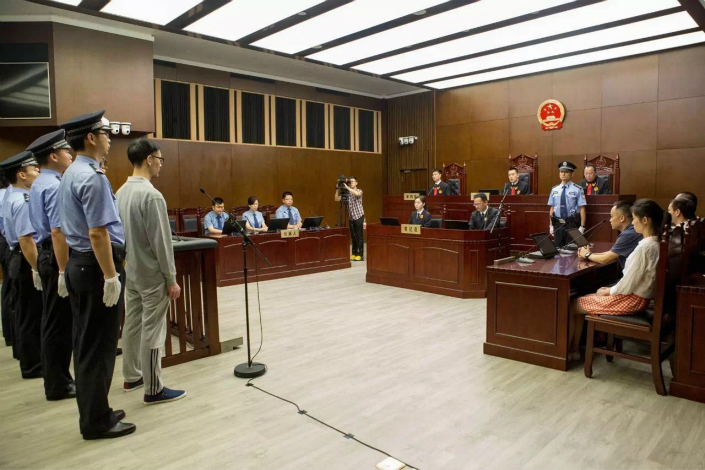 (Shanghai) — A Shanghai court has fined a high-frequency trading firm controlled by two Russians and handed out suspended jail sentences to two of its traders after they were found guilty of manipulating China’s futures market before and during the stock market meltdown in the summer of 2015.

Yishidun International Trade Co., also known as Eastern Dragon (ED), was fined 300 million yuan ($43.9 million) and ordered to hand over 389 million yuan in illegal gains made from high-frequency trading on China’s index futures, the Shanghai No.1 Intermediate People’s Court said in its verdict released on Friday. The company could not be reached by phone or email for comment on Monday.

The landmark case marks the first time a Chinese court has issued a verdict on high-frequency trading, which involves using algorithms to buy and sell large amounts of shares automatically at very high speeds. The practice is not illegal in China, but its use in trading stock-index futures was seen by regulators as having exacerbated the turmoil in the market that started in June 2015 and saw the benchmark Shanghai Composite Index slump 42% in two months.

Yishidun was one of several foreign-owned and domestic traders investigated by authorities in the wake of the collapse as they sought to root out the causes of the crisis and tighten regulations to prevent a recurrence.

In its verdict, the court said the behavior of the defendants — the company, two of its employees and an official from a brokerage — “constituted a crime of manipulation of the futures markets, a crime they committed jointly, and furthermore the crime was particularly serious.”

The court said that Yishidun illegally connected its proprietary trading system to the China Financial Futures Exchange, allowing it to circumvent brokerage systems and giving it the ability to trade at a faster speed. From June 1 to July 6, 2015, the firm traded 3.77 million futures contracts on the CSI 300 Index and CSI 500 Index, making a profit of 389 million yuan. The company’s general manager, Gao Yan, and Jin Wenxian, a broker at China Fortune Futures, borrowed or purchased 26 futures accounts to trade on the futures exchange.

Jin was found guilty of helping Yishidun cover up details of its trading activity and of using his position to embezzle 134.8 million yuan from his employer. He was given a five-year prison sentence and fined 600,000 yuan.

An emailed statement from Yishidun cited by Bloomberg News said the court’s verdict “does not suggest that Eastern Dragon’s trading strategy distorted the market, but that the trading system ED employed merely gave it a speed advantage over other traders.” It also said that the fine imposed by the court was at the lowest end of the options available to it.

The firm said an independent audit of its trading model conducted after the Chinese authorities’ investigations found nothing consistent with “market manipulation” as the term is understood outside of China.

Yishidun is controlled by two Russian nationals, identified by the court as Georgy Zarya and Anton Murashov, but they were not named as defendants in the case. The court said they will be dealt with in a separate case.

In August and September 2015, in response to the market crash, the China Financial Futures Exchange introduced new regulations and charges, the harshest since stock-index futures were introduced in 2010, to control trading. Margin requirements were raised to 40% from 10% for investors trading stock-index futures for purposes other than hedging, and commission charges were raised from 0.015% to 0.23% of transaction values. The number of contracts investors could buy was limited to 10 per day.

Some of those rules have now been relaxed as the market has recovered. In February this year, the China Securities Regulatory Commission raised the daily limit on contracts to 20, reduced commissions, lowered margin requirements to 20% on SSE 50 index futures and CSI 300 index futures and cut those on CSI 500 index futures to 30%.