Editorial: What’s Next for China After U.S. Pulls Out of Paris Accord? 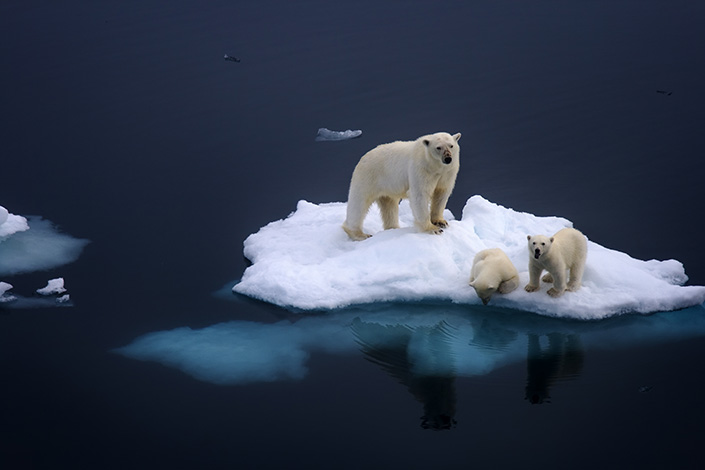 As the U.S. reneges on its commitment to the Paris climate accord, China will play a greater role in the coalition against climate change. Above, a female polar bear and her two 6-month-old cubs rest on an ice floe near Norway's Svalbard archipelago after a 60-mile Arctic swim. Photo: Visual China

U.S. President Donald Trump’s decision to pull out of the Paris climate agreement has upset the international community. Signed in 2015 by nearly 200 countries, the accord was a landmark move. It calls on countries to reduce their greenhouse gas emissions in a bid to keep global warming below 2 degrees Celsius.

The European Union has rejected Trump’s offer to renegotiate the Paris climate deal and pledged instead to bypass Washington to work with U.S. business leaders and state governors to implement the historic accord’s commitments. Chinese Premier Li Keqiang has also reaffirmed China’s commitment to cut carbon emissions and pursue a more-sustainable course of development.

Despite the federal government’s pullback, U.S. states and cities, including the states of California, New York and Washington, have formed an alliance to uphold the agreement and curb emissions. On June 6, President Xi Jinping met with California Gov. Jerry Brown, in a rare meeting between a state official and a national leader, to discuss climate change cooperation.

As the U.S. turns inward, many have asked whether China will step forward to fill the emerging leadership lacuna on global environmental policy. The answer depends on how we define leadership. The U.S. withdrawal shouldn’t affect China’s determination to meet its climate goals. Consistent efforts to cut emissions will help the world’s most-populous country — and second-largest economy — to switch to a more-balanced development model. Fulfilling its pledges is the best way for China to reassure the international community about the need to stick to the Paris deal. China can also move a step further and help coordinate efforts by different countries to fight climate change. This approach fits China’s current capacity and influence.

The Paris accord isn’t legally binding and doesn’t penalize nations that fail to meet their commitments. It requires countries only to submit plans to reduce carbon emissions and puts the onus of implementing those plans on individual nations. Many scientists, nonetheless, view the deal as an essential step to prevent global catastrophes wrought by drought, devastating storms, coastal erosion and the decimation of aquatic ecosystems like coral reefs due to warming and ocean acidification. But some climate skeptics are echoing what Trump’s advocates have said and are trying to restore traditional manufacturing and push up coal production to give their economies a quick boost.

Concerns have mounted on whether the Paris accord will unravel, just as its predecessor, the Kyoto Protocol, flopped after a U.S. withdrawal. China should join hands with other major nations in Europe, Asia and Africa to push forward further negotiations and fulfill pledges made. China should also work with U.S. states and organizations that have are keen to uphold the agreement so that it can equip itself with the latest technologies on clean-fuel generation, smart grids and carbon capture.

The U.S. pullout may push China onto the global limelight, but Beijing should start by fixing its own problems. As one of the few countries in the world that still rely heavily on coal-fired power generation, China has emissions that are much higher than those of the U.S., U.K, Japan and other developed countries. This poses a great challenge when it comes to reducing the country’s carbon footprint. Policymakers must remember that China has already paid a heavy price for hosting polluting industries, with many of its major cities frequently choked by hazardous smog.

China should also push ahead with legislation to protect its environment, manage energy consumption and establish a carbon trading system. Authorities must also enhance public awareness on climate change. This would help create a positive example for other developing nations who are also transitioning to cleaner energy sources.

Global observers are also closely watching how America’s withdrawal from the Paris accord will affect Sino-U.S. ties. The two countries had made significant progress on joint efforts to tackle climate-related issues under the Obama administration. But the Trump administration’s stance on environmental issues may weaken this important pillar supporting bilateral relations.

The U.S.-China Strategic and Economic Dialogue, established in 2009 to support regular interactions between top leaders from the two countries, has evolved into a dialogue platform with four separate channels focusing on foreign affairs, the economy, law enforcement and cybersecurity, and people-to-people exchanges, after Xi met Trump in April. But whether this new framework will include the U.S.-China Climate Change Working Group isn’t clear.

The U.S. is the world’s second-largest emitter of carbon, behind only China. As America reneges on its commitment to the Paris accord, China will play a greater role in the coalition against climate change, but it must remain calm and rational. As the biggest beneficiary of globalization, China has an obligation to promote environmental protection to benefit the whole world, but it all starts with putting one’s own house in order.

Hu Shuli is the editor-in-chief of Caixin Media.