Samsung Seeks to Reconnect With Smartphone Shoppers in China 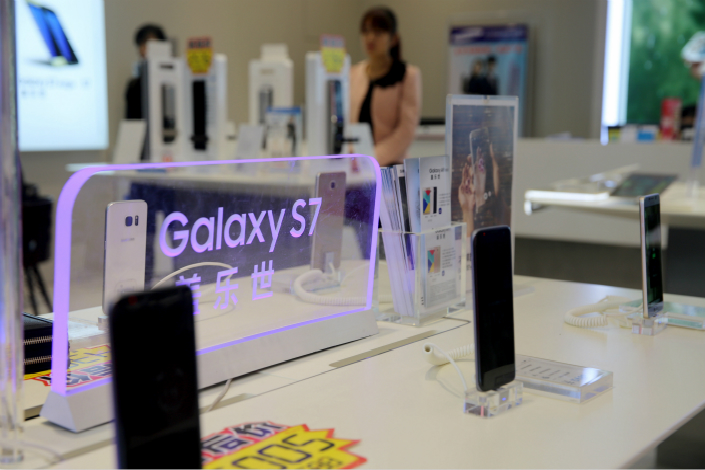 Despite slipping sales in China, Samsung is showing it hasn't given up on the market, launching the new, high-end S8 smartphone in the country on May 18. Above, a Samsung store in Sanmenxia, Henan province, promotes the then-new Galaxy S7 smartphone on Oct. 21, 2016. Photo: IC

Samsung used to be a leader in China’s high-end smartphone market before a series of high-profile setbacks late last year sent the brand’s image crashing down.

At its peak, South Korean giant Samsung accounted for over 20% of the phones sold in China. In 2017’s first quarter, however, Samsung sold only 3.8 million handsets in China — approximately 3% of all phones sold in the country, according to market research firm Gartner.

“This could be Samsung’s worst-performing quarter in China,” a regional sales manager at Samsung told Caixin. The Note 7 recall and anti-South Korean sentiment over the country’s planned installation of a controversial U.S. missile system earlier this year have badly affected sales, the manager said.

But Samsung showed some weakness in China even before its latest woes. As early as 2015, Samsung’s annual smartphone sales in China had fallen to 29.02 million units from 2013’s 58.94 million units, figures from Gartner show.

Samsung doesn’t plan on giving up the China market, though. On May 18, Samsung introduced its S8 series at a news conference in Gubeishui, on the outskirts of Beijing. A week later, it began selling the phones in China. The S8 is the first high-end product launched by the company since the Note 7.

At the same time, the company has overhauled its China operations, replacing seven Chinese regional branches with 26 offices in early July, and bringing in a Kwon Kye-hyun as its new Greater China president. Samsung has also remodeled their entire distribution system in China.

Kwon, who took over from his predecessor, Bae Kyung-tae, in early May, wants to take control of Samsung’s product prices, which have long caused difficulty for the company in China.

Samsung’s headquarters in South Korea “often has higher sales expectations than what the market can handle, and frequently causes the problem of distributors having excess stock,” a China-based Samsung agent said.

When distributors have excess inventory, it’s tempting for them to cut prices to clear stock, causing prices across the market to fall rapidly, the agent said, adding, “In the long term, distributors’ trust in Samsung is affected.”

Additionally, by the time the company’s S7 smartphone series was launched in March 2016, there were more than 7,000 distributors selling Samsung products across China — nearly too many to control.

Kwon announced a new vision of Samsung at a partner’s meeting held on the same day the S8 was launched in Gubeishui – the “351” system, which he and Greater China mobile communications Vice President Kim Dongjin hope will rein in unruly pricing practices.

Under the “351” system, which sounds in Mandarin like “I want Samsung,” 351 distributors were selected to carry Samsung’s S8 series, an executive at Samsung China told Caixin. These retailers were selected by Samsung as well as its three national agents, China Telling Communications, Shenzhen Aisidi, and Putian Taili, based on past sales performance.

Downsizing from 7,000 to 351 distributors is a drastic step. “If it doesn’t succeed, and products don’t sell, it could kill all future opportunities for the China business,” the executive said.

But an executive at D.Phone, one of the lucky 351, told Caixin that the change looks bigger than it actually is. In the past, the D.Phone executive said, Samsung’s distributors were a mixed bag, and almost all the distributors who were really good at selling Samsung products are still on the current list.

In addition to streamlining its distributor network, Samsung China has also changed the way it delivers stock. In the past, Samsung set expected sales volumes and delivered stock based on the previous volume of stock delivered to a particular distributor, rather than how much of the previous delivery the distributor actually sold.

Now, Samsung has turned the system around and begun basing sales expectations on how much distributors have actually sold.

This year, Samsung’s strategy in China isn’t pursuing volume, the vice president of a smartphone manufacturer told Caixin. Rather, the company is focused on recovering distributors’ trust and rebuilding the brand image.

The company’s short-term hopes for recovery are modest.

“This year, our sales targets are very pragmatic,” a sales executive at Samsung told Caixin. “We hope to take around 10% of the Chinese market.”

In addition to May’s S8 series, Samsung will introduce a new Note product in the fall, and may also launch a high-end folding phone late in the year, the sales executive said. All these products combined could help Samsung achieve this 10% target, they added.

Gartner analyst Lu Junkuan believes that Samsung’s higher-end products will be the key to recapturing the Chinese market. The midrange market is already crowded, with competitors Huawei Technologies Co. Ltd., Oppo Electronics Corp. and Vivo already firmly entrenched, so the most important thing for Samsung is to promote its more-expensive phones, and its sales in first- and second-tier cities, Lu said.

New Greater China President Kwon is more willing to listen to the Chinese market’s “voice,” a Samsung executive told Caixin. In the past, under Bae, Chinese staff were practically barred from attending core sales meetings, but now, not only are Chinese executives included, their opinions are valued more, the executive said.

But Samsung has a long way to go in translating its new strategy and attitude into actual sales in China.

Retailers in provincial-level regions that include Jiangsu, Heilongjiang, and Beijing told Caixin that Samsung was not a major attraction at their stores, and that they primarily market Chinese brands like Oppo and Vivo.

Additionally, while Samsung China has enthusiastically overhauled its operations, the company’s South Korean headquarters may not have as much zeal for investing in building up Chinese smartphone sales. China accounted for only 7% of the company’s smartphone sales worldwide, figures from IDC show.

Still, Samsung won’t let go of the Chinese market without a fight — the country’s smartphone market is one of the world’s largest, and the company’s semiconductor, panel, and battery production have all set roots in China, Gartner’s Lu said.