By Wang Xiaoqing and Dong Tongjian 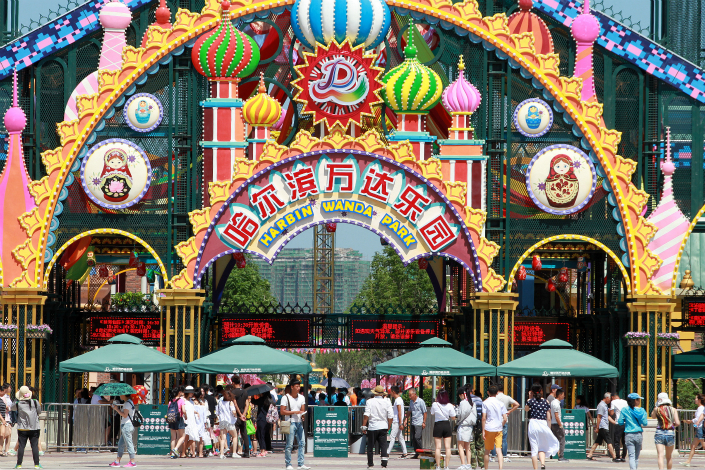 (Beijing) — As part of Dalian Wanda Group’s planned sales of its theme parks and hotels to Sunac China Holdings Ltd. for 63.2 billion yuan ($9.29 billion), the buyer agreed to pay an additional 13 billion yuan to Wanda to continue managing the parks.

Regulatory filings from the companies also show that Wanda also agreed to secure almost half of the financing that Sunac needs to pay for the deal.

Earlier this week, the two companies surprised the market with their asset-sales plan, which didn’t disclose the financing arrangement. Sunac Real Estate, a subsidiary of Sunac China, agreed to buy from Dalian Wanda Commercial Properties 91% equity stakes of 13 cultural and tourism project companies for 29.6 billion yuan, and the entire equity stakes of 76 city hotels for 33.6 billion yuan, the filings showed.

Regional business directors at Sunac were recently told to take over Wanda projects in preparation for the ultimate sale of those assets, sources told Caixin.

The filings said Wanda will continue to manage the theme parks after the sales. Sunac agreed to pay an annual management fee of 50 million yuan to Wanda for each theme park over the next 20 years.

As of end of 2016, the aggregate net assets value of the 13 theme parks being sold in this deal was 24.9 billion yuan, while the value of the 76 hotels was 33.5 billion yuan, the filings said. Market watchers say that based on these numbers, the hotels are likely be sold at their book value, while theme parks are likely at a premium of as much as 1.19 times their book value.

The filings also said Wanda will take out a bank loan of 29.6 billion yuan and lend it to Sunac to partially fund the deal. The interest, which Sunac will pay, will be priced against the benchmark lending rate of an unnamed designated bank, it said.

Wanda Chairman Wang Jianlin told Caixin that the proceeds from the deal will be used mainly to pay back bank debts in a bid to reduce the property developer and cinema chain operator’s ratio of liability to assets.

“The proposed acquisition will substantially increase its operating scale and land bank. However, the transaction will also raise its financial risk and keep its debt leverage elevated, as it plans to partly fund the transaction with debt,” said Franco Leung, a senior credit officer at Moody’s Investors Service.

When the deal is complete, Sunac will become China’s third-largest property developer in terms of land reserves, which will total more than 129 million square meters (1.39 billion square feet), or more than one and a half times the size of Hong Kong Island.

On Wednesday, Fitch Ratings Inc. downgraded Sunac to BB-minus from BB. Both are non-investment grades. The credit-rating agency said it expects Sunac over the next 12 months to seek more acquisitions to boost the scale of its business, thus increasing its leverage.