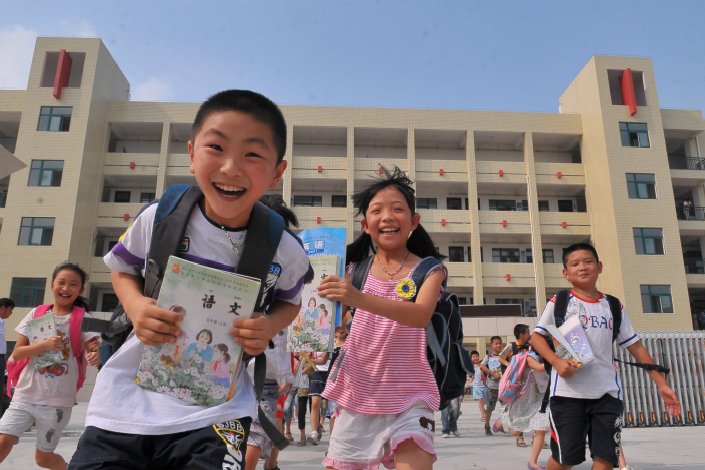 The number of primary schools and middle schools in China has fallen 18.5% between 2012 and 2016, even though the population of school-age children is on the rise. Photo: Visual China

(Beijing) — Competition for a seat at primary and middle schools has heated up as the number of public schools continues to decline despite the rising number of school-aged children, an analyst said.

China had nearly 1 million more students vying for a seat in grades one through nine in 2016 compared with the previous year, according to the Ministry of Education.

In 2016, enrollment in schools offering grades seven through nine rose — for the first time in five years — by 5.4% from a year earlier to 14.87 million students, ministry data showed.

The number of primary school students in China has been on the rise for two years in a row — up by nearly 5.7% from 2014 to 17.52 million last year, the ministry said earlier this week.

This means that more students will have to study in congested classrooms, which would compromise teaching quality and safety, according to Wu Zhihui, a professor of education at Northeast Normal University in Changchun, Jilin province.

A stampede at a primary school in central China’s Henan province in March that killed one child and injured 22 others sparked a heated debate online over the issue of overcrowding in schools. The incident happened when 1,700 students rushed to use the only two restrooms in the school — with 39 squat toilets — during a short break before an exam.

Many schools in rural counties and townships have been overwhelmed by an influx of students since the government began 15 years ago ordering the closure of thousands of small rural schools with fewer than 100 students. The closures have forced very young students to travel far, at times on dangerous roads, to reach school or to stay in boarding schools that lacked basic amenities such as a dining hall.

In one instance that grabbed national headlines, a school bus carrying 70 students overturned and plunged into a roadside ditch in Fengxian county, Jiangsu province, in December 2011. The accident killed 15 primary school students and left eight others injured.

About 60% of the 558,000 primary and middle schools in the country were closed from 2001 to 2016 as a result of government-sanctioned closures and the official push for urbanization, according to education ministry data.

The spike in the number of school-aged students could be a result of a zealous rush by young parents to have “an Olympic baby” in 2008, when China hosted the Summer Olympics for the first time.

School authorities should prepare for another possible spike in demand as the number of school-age children is expected to rise in the next few years because China has eased family planning policies. The country relaxed its one-child policy in 2014, allowing a couple in which either partner was an only child to have two children. Then it scrapped the restriction and allowed all couples to have two children at the beginning of 2016.