One in 10 Left-Behind Children Says One Parent Is 'Dead'

By Luo Ruiyao and Li Rongde 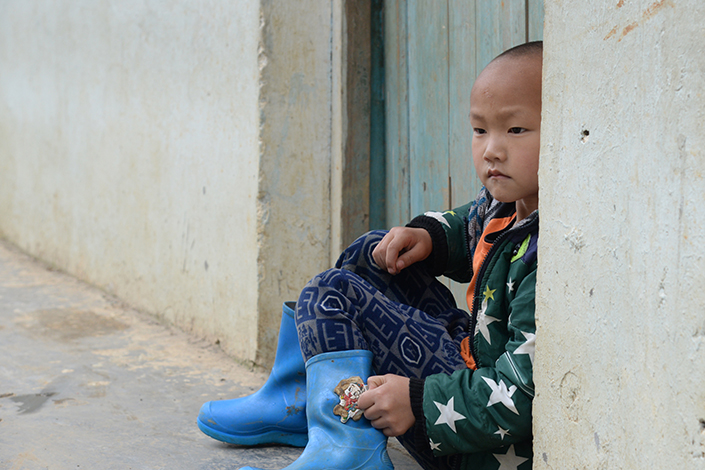 A boy sits in front of a door in Hechi, Guangxi, on April 20. The boy is one of 200 students at Shang Zhen primary school, where most of the children have parents who have left for work in China’s bigger cities. Photo: Visual China

(Beijing) – Children in villages left behind by parents who opt to work in cities get to meet their mothers and fathers only once or twice a year, a survey has found.

These long absences have led to a “high level of resentment” among children, with one in 10 surveyed saying a parent had died over the preceding month, according to a study released Friday by On the Road to School, a Beijing-based NGO.

“This finding is really heart-wrenching, because the parents are still alive, but in the children's minds, they are already dead,” said study leader Li Yifei from Beijing Normal University.

“China’s average mortality rate in 2016 was seven deaths per 1,000 people. So this high level of ‘deaths in one month’ can only be seen as resentment among left-behind children toward their city-bound parents,” Li said.

Nearly 10 million children, or a quarter of all primary and secondary school-aged students in Chinese villages were left under the care of grandparents or relatives, while both parents worked as migrant laborers in distant cities, Li said. Over 23 million others were living without one parent.

According to the survey, over half of the left behind children lived in impoverished areas in central, southwestern and northwestern provinces, while their parents worked on the affluent east coast.

The cost of travel and the lack of paid holidays for construction workers or shop assistants means most rural migrants can go home to see their children only during major national holidays such as the Chinese Lunar New Year, with each visit limited to a few weeks.

Although China’s rapid urbanization has pushed millions of rural residents into cities in search of better-paying jobs, they face several hurdles if they wanted to bring their children to cities with them. For example, the country’s rigid household registration system limits migrant access to public services such as affordable public schools.

The survey, conducted earlier this year, sampled 14,868 students from grades three through eight in 17 provinces, regions and municipalities. Over 80% of the respondents were rural students.

Nearly a quarter said their father had left for work in a city and more than 5% said they were separated from their mothers.

Growing up without parents, particularly mothers, has an adverse impact on the upbringing of rural children, researchers said. More than 75% of village students whose mothers were working away from home said their academic performance has suffered over time, compared to 65% of all students surveyed.

Nearly 60% of students growing up without their mothers said they were bullied, in comparison with 40% of all students surveyed.

One in three left-behind children was involved in a fight last year, compared with only 20% among all rural students, the study said.

If one parent has to leave for work, it's better to have the mother stay with the children, researchers recommended.