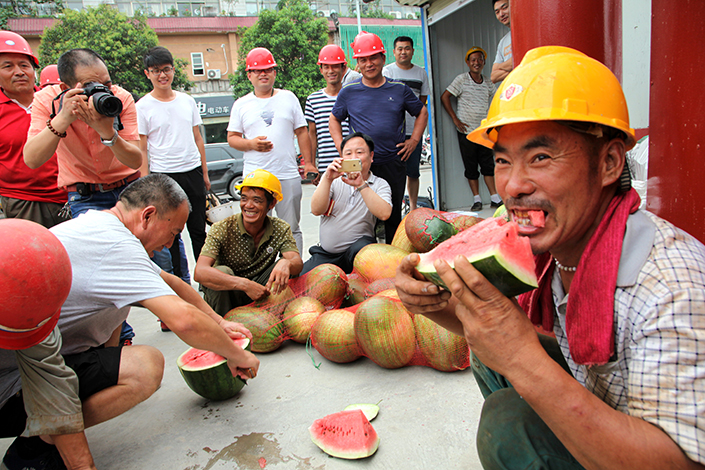 A study that shows the lack of success that migrant workers have finding employment if they return home appears to bode ill for government efforts to encourage rural farmers to remain in their villages. Above, a migrant worker eats watermelon provided by volunteers who showed their appreciation for the migrants' work at a construction site, in Xuchang, Henan province, on July 16. Photo: IC

(Beijing) —Two in five migrant laborers returning home failed to find work because they lacked skills and within five years left for jobs outside their respective home provinces, researchers from the Chinese Academy of Sciences said.

The study by the government-backed think tank sheds light on why China’s army of migrant workers — more than 277 million at last count — is in constant flux, with many choosing to move back to their home villages at some point and then leave again.

The finding appears to bode ill for government efforts to encourage rural farmers to remain in their villages or find jobs in places close to their homes to address overcrowding and pollution in large cities such as Beijing.

Policymakers are also encouraging migrant parents to return home and find jobs locally as China grapples with high dropout rates and depression among children left in villages under the care of grandparents. The country has 10 million children who see their parents only once or twice a year.

But development disparities between rural areas and cities and the rich east coast and impoverished central and western provinces and regions are undermining this push to slow an influx of farm workers into cities.

The study, which sampled some 2,000 rural households in 100 villages in Jilin, Hebei, Jiangsu, Shaanxi and Sichuan provinces from 1995 and 2015, found that only 4% of the returnees were able to start their own businesses close to home.

Nearly a third of the returnees held low-paying jobs in nonfarming sectors in their home provinces; a quarter of them returned to farming; and the rest were still struggling to find a job, according to the research, released earlier this month.

Professor Zhang Linxiu, who headed the study, said that policymakers can’t tell rural farmers to remain in their villages or leave without addressing deep-rooted problems that affect this group.

Zhang said the core issue affecting migrant workers is that they lack adequate education and the know-how to move to a better-paid job or start their own business.

She said China should look for inspiration from South Korea, a country that has transformed itself into a developed economy through better schooling for all; and also learn lessons from Mexico, whose economy is still plagued by a widening rural-urban gap in terms of access to schooling.

China still has 54.66 million illiterate people, and most of them live in rural areas, according to the National Bureau of Statistics.

There are 277.5 million migrant laborers, including 77.45 million, or 28%, who live and work in places other than their home provinces or regions.

Among those who left to work elsewhere, a rising number took up jobs outside their home provinces, up from 16.2% in 1998 to nearly a quarter in 2015, due to better pay.

The number of migrant workers who chose to work in their home county declined over the period, down from nearly half to 41.6%.

Those who didn’t move earned 13 yuan per hour on average.

To woo migrant laborers back to their hometowns or away from overcrowded cities, local governments in less-developed areas need more help from the central government to create more jobs and improve welfare and public services, Zhang said.