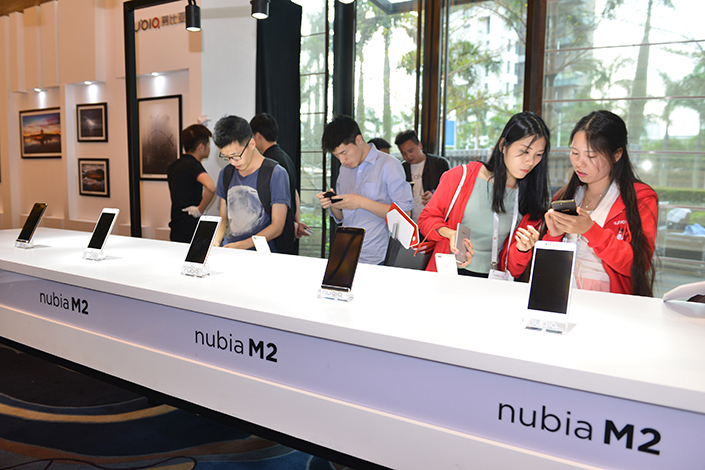 ZTE Corp. will retain less than 50% of Nubia after selling 10.1% of its stake in the higher-end smartphone brand. Above, customers try out Nubia’s M2 smartphone model at a launch event in Shenzhen, Guangdong province, on March 21. Photo: IC

Shares of telecom equipment maker ZTE Corp. rose on Friday, after the company announced a share sale that would remove an unprofitable higher-end smartphone unit from its books.

ZTE’s Shenzhen-listed shares were up 2% in late afternoon trade, while its Hong Kong-listed shares rose by a similar amount earlier in the day before giving back those gains to finish flat. Both stocks now trade near 2-year highs, as the company’s performance improves following an overhaul to remove noncore businesses and exit marginally profitable markets.

In an extension of that campaign, ZTE said it had agreed to sell 10.1% of its Nubia smartphone unit to Nanchang Gaoxin New Industry Investment Co. Ltd. for 727.2 million yuan ($107 million), according to a stock exchange filing on Thursday. ZTE said the sale will lower its stake in Nubia to 49.9%, meaning the unit will no longer be considered its subsidiary and thus won’t be included in its financial results.

Nubia has struggled over the last year, swinging to a post-tax loss of 91.4 million yuan for 2016 after reporting a 280 million yuan profit in the previous year. In addition to lowering its stake below 50%, ZTE said it will also realize a 400 million yuan pretax gain from the sale.

“The disposal will introduce (a) new investor to (Nubia), which is beneficial to the development of (Nubia) in the future,” ZTE said in the statement.

Nubia’s losses are likely to continue into the current year, said Edison Lee, an analyst at research house Jefferies.

“Therefore, by reducing its stake to below 50%, ZTE will de-consolidate Nubia as of 2017, and any loss at Nubia will be recorded only at the associates’ level,” he said in a research note. “We believe one reason for the stake sale is to increasingly shift its handset focus to international markets. Nubia was created to be a higher-end brand but it has not been successful. … We think ZTE will likely further reduce its stake if Nubia does not show significant improvements.”