By Coco Feng and Sun Wenjing 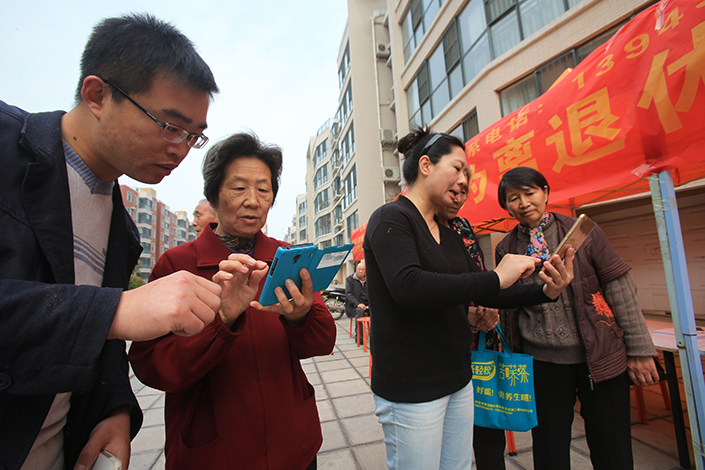 A new report says that 96.3% of internet users in China had access through their cellphones, an increase of 1.2 percentage points from the end of last year. Above, volunteers in Kaifeng, Henan province, demonstrate how to surf the internet on smartphones in April 2016. Photo: IC

China’s population of internet users rose 2.7% over the first six months of the year to 751 million, exceeding the population of Europe, a new report showed.

The rising figure, reported Friday by the China Internet Network Information Center (CINIC), indicates how the rise of mobile internet services such as online food delivery has driven growth in China’s online population and its internet penetration.

In China, 96.3% of internet users had access through their cellphones, an increase of 1.2 percentage points from the end of last year.

Among mobile internet applications, food delivery, wealth management and bike-sharing put up some of the biggest growth numbers.

At the end of June, online food delivery services had 274 million users, a 41.4% increase from the end of 2016, making it the fastest-growing sector.

The biggest food-delivery services, including Meituan and Ele.me, had more than 6 million daily active users, according to data firm Trustdata.

The number of people that used internet services to manage their money grew 27.5% over the first six months to 126 million, according to the CINIC report.

As the market for wealth management products has grown more regulated, the yields on these investments have declined. A few years ago, some startups such as peer-to-peer lenders that were eager to attract users promised annual interest rates that exceeded 20%. Concerned about financial risks, the State Council, China’s cabinet, issued plans last year to counter fraud in internet financing. The platforms have since begun to adjust their business models, leading to lower rates.

China’s online payment industry has also taken off over the last six months, hitting a record 502 million online payment users, making China one of the most cashless countries in the world. Leading digital-wallet operators such as Alipay, owned by Ant Financial Services Group, and WeChat Pay, embedded in Tencent’s popular messaging app WeChat, have also sought to expand to the U.S., Europe and Southeast Asia, catering to Chinese tourists who travel abroad and are used to making online payments.

Users of bike-sharing services are another major growth group. The number of users surged from zero just over a year ago to 106 million in June, accounting for 14.1% of all internet users, according to the CINIC report.

However, the popular live-broadcasting business was weak in terms of growth in the first six months. The number of live-broadcasting users fell 0.3% to 343 million. Regulations on online video content, which have put restrictions on news reporting and sexually suggestive topics, have weighted on the sector’s growth.