By Liu Xiao and Yue Yue 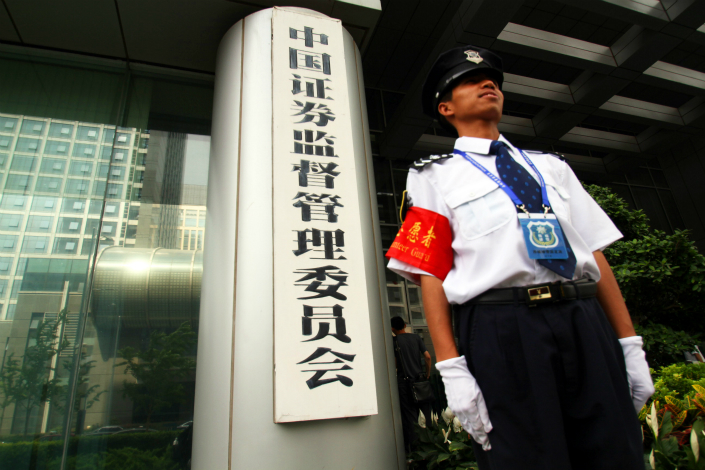 Collusion involving large networks of individuals and funds is an increasingly popular form of stock-market manipulation in China, the country’s securities regulator concluded from its latest investigation.

Despite a high-profile sentence of an infamous fund manager accused of rigging the market, as well as record fines handed down by the China Securities Regulatory Commission (CSRC) this year, the regulator’s latest probe that started in April has uncovered more manipulation cases involving large groups of colluders, spokesperson Gao Li said last Friday.

Declining to identify the individuals or the companies, Gao offered details on several specific cases.

In one case, managers and directors at a listed firm colluded with private equity firms to orchestrate the timing of company announcements such as share placements or stock splits, Gao said. More than 200 securities accounts were used to buy and sell shares, often from each other.

This market manipulation tactic was made infamous by Xu Xiang, a former billionaire hedge fund manager who was sentenced to five-and-a-half years in prison in January.

Xu was found guilty of colluding with senior executives of 13 listed companies from 2010 to 2015 to issue positive news about companies to boost prices and lure retail investors. The executives and funds managed by Xu then dumped their stock at the higher prices.

In another case that the regulator is still investigating, a person with control over a listed firm created and led a team that was tasked with artificially inflating share prices. The group raised several billion yuan, and operated more than 300 securities accounts to make transactions that artificially buoyed prices, often to daily trading limits. The group targeted new stocks that had been listed for less than a year, which are considered to have higher growth potential than blue chip stocks.

A variation of the method was used by someone with control over a firm listed on China’s over-the-counter stock-trading platform. Through fund management plans, shell companies and other people’s securities accounts, this person orchestrated continuous trading to make the firm look more attractive to market makers and investors, before dumping shares.

Earlier this year, the securities regulator made it more difficult for large shareholders to dispose of their shares to reduce market volatility and encourage long-term investment.

The CSRC's fines for market manipulation totaled 6.36 billion yuan in the first half of the year, 1.5 times higher than during the same period in 2017, and more than the total amount of fines it gave in 2015.